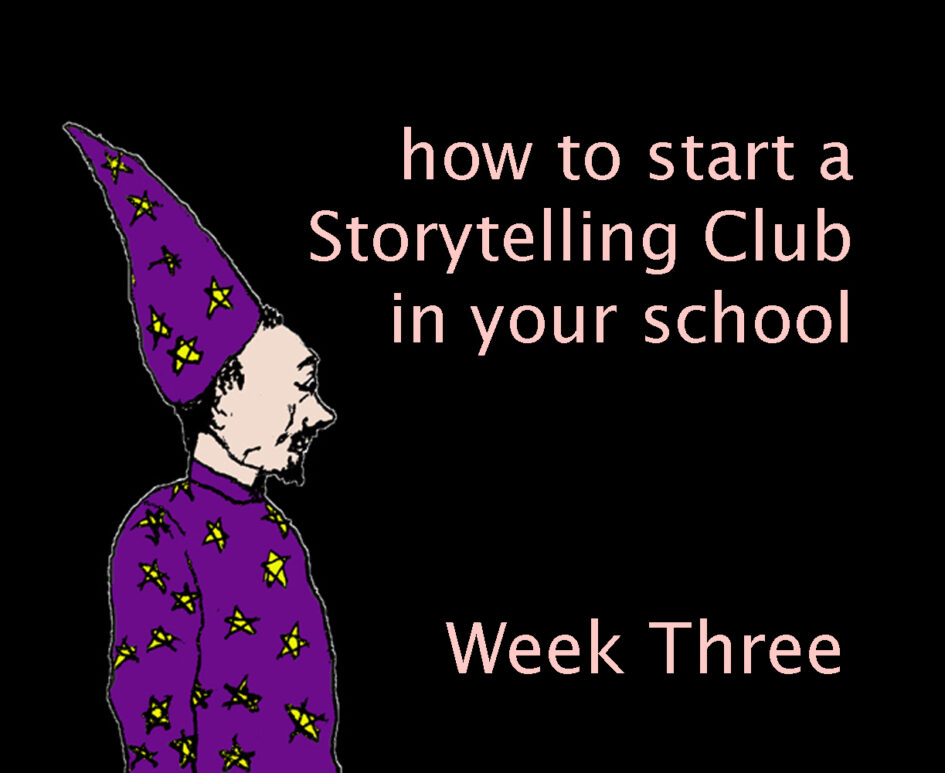 Storytellers use pictures in their heads to remember and navigate their stories, but these should not be thought of as merely visual images. They are more like virtual realities, and include smells, sounds and other sensations.

When telling, bringing in these different sensations makes the story more real for the audience; they can relate to these feelings and become more immersed in the story.

This exercise is designed to enrich the group’s storytelling by including these sensations.

Useful stories for this technique are ones where the action is set in different distinct spaces. Eg: The 3 Little Pigs & The Big Bad Wolf, Goldilocks & The 3 Bears, Cinderella.

(1) Working as a whole group, roughly storyboard the scenes in a chosen tale with very basic black-and-white pictures on a single sheet of paper eg: flip chart / board. This helps check that everyone has the same version of the story in their heads. It’s also important that everyone can see the whole story at a glance.

Don’t try to tell every little piece of the story, concentrate on the sounds.

Write the sounds onto the storyboard in their correct positions, like sound effects in a comic strip. Use a coloured pen.

(3) Go round the group telling the smells in the story.
Eg: ‘scent of roses’, ‘thick smoke’, ‘bad breath’

Again, write the smells onto the storyboard, using another colour.

(4) Go round the group telling what things feel like to the touch in the story.
Eg: ‘rough, warm wood’ soft, plump cushions’ ‘cold, smooth glass’

Again, write these textures onto the storyboard, using another colour.

Write these tastes onto the storyboard, using yet another colour.

(6) Next go round the group telling the emotions in the story.
Eg: ‘surprize’ ‘delight’ ‘wonder’ ‘horror’ ‘fear’

Write these emotions onto the storyboard, using yet another colour. You should now have a very full, colourful, storyboard.

(7) Finally go round the group re-telling the whole story from start to finish, one complete sentence per person. Try to include all the words, phrases and noises generated above.

Younger children (and some older ones) might find it easier to retell the whole tale, one complete sentence per person, after each new sensation is added, so they build up the story gradually, layer on layer of sensation.

This exercise is designed enrich the group’s storytelling by prompting the storyteller to include descriptive phrases.

(1) Chose a short, traditional tale to tell to the group.

(2) Working as a whole group, ‘bullet point’ the story – make a note of each essential incident.

(3) Deal out a ‘sensation’ card so everyone has one.
Make sure no-one looks at their card until it is their turn to tell

(4) As a group, retell the story, each saying a couple of sentences at a time and including a reference relevant to the sensation on the card,

Experiment by breaking into two groups, each re-telling the same story. The final versions should vary depending on which sensations were on the cards dealt to the members of each group.