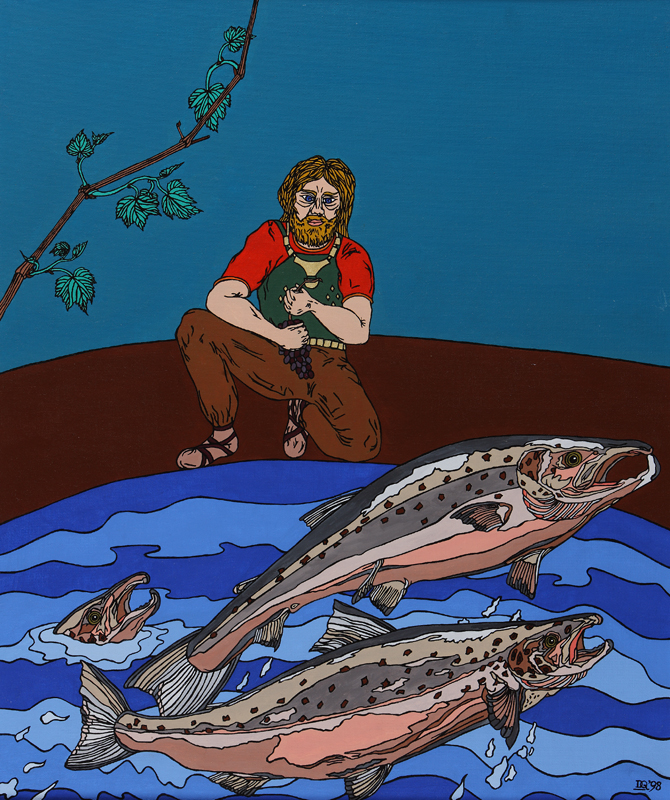 They say you make your own luck and the great Viking explorer Leif Eriksson had certainly earned his nickname, Leif the Lucky. Tales were told of his great feats all over the northern lands, but some events you can just put down to luck.

Leif’s ship had hit bad weather out from Greenland and was storm tossed for days. When the storm died and the exhausted sailors yearned to put their feet on dry land and they heard Leif’s voice shout ‘Land Ho’, no one was surprised. Leif was lucky, and they were lucky to serve him.

The land Leif had spied was what we now call Newfoundland and even though winter loomed ahead, Leif had brought his luck with him. During their stay the winter refused to bite and the wind refused to blow.

Now with weather such as that you can well imagine why the Vikings thought they had found an ideal world. They stayed until spring and left for home with a ship full with maple timber and the fruits of this fair new land.

It was towards the end of their stay that finally Leif had the inspiration he needed to name the country he had found.

His men had been out exploring that day and one had failed to return. Leif was angry because this wasn’t just an ordinary crewman but his faithful retainer, Tyrkir. Some would say that Tyrkir was just a German slave, but he’d been like a foster father to Leif, he’d served Leif’s father, and many was the time he’d played with Leif as a boy or taught him the skills a Viking warrior would need.

Leif got his crew together and formed search parties. But before they set off into the forest Tyrkir parted the bushes, and somewhat unsteadily emerged into the twilight. He was swaying slightly and had a twinkle in his eye. When they saw what he was carrying it didn’t take long for them to guess what he’d been up to.

Tyrkir came bearing a huge bunch of grapes and a piece of vine. Those grapes had been on the vine all winter long and were well fermented; Tyrkir had eaten a good many and had become quite merry. Leif was angry no more. They all sat and listened to Tyrkir’s tale of grapes and vines and salmon in the streams bigger than any man had ever seen. They went to bed happy that night and slept well.

The next morning the crew awoke to Leif’s bellowing voice.

“We will call this land Vinland”.

Their laughter, it’s said, could be heard all the way to Greenland, but Vinland it was.

If you were first to land in Canada what things would you look for to make your new home?

Do you think other people would share your choices?

Leif took a cargo of grapes, cut vines and timber home from Vinland. Many people saw the wealth of the land and wanted to set off to live there.

What tools and equipment do you think they would’ve taken from Greenland to harvest the wealth of Vinland?

Vines In The Lines

Now see if you can think up a leading article for issue 1?

Draw a picture of that historic moment when Leif set the first Viking foot on Canadian soil.

Alas, I don’t think the Vikings took official painters on their long ships to catalogue important moments of history.

Your could feature your picture on the front of Vinland’s first newspaper.

Retro Midi file karaoke on this rather dated North American folk song the lyric is below for you to sing along (or rewrite!)

I never shall forget the day Columbus landed here.
Myself and forty Indians were there right on the pier.
He asked me why the Indians wore feathers in their hair.
Oh, that’s to keep their trousers up, and this I do declare:

Columbus asked me where to go to catch the China train.
To me ’twas clear the poor old coot had China on the brain.
I said, “I fear there is no train that leaves for there today.
You’ll find my Chinese laundryman not half a block away.”

He noticed some of my Red Men had skins that were quite fair,
And wondered if a white man might be living near somewhere.
I said, “You have to realize that I’ve been here some time.
They certainly cannot be yours but they, no doubt, are mine.”