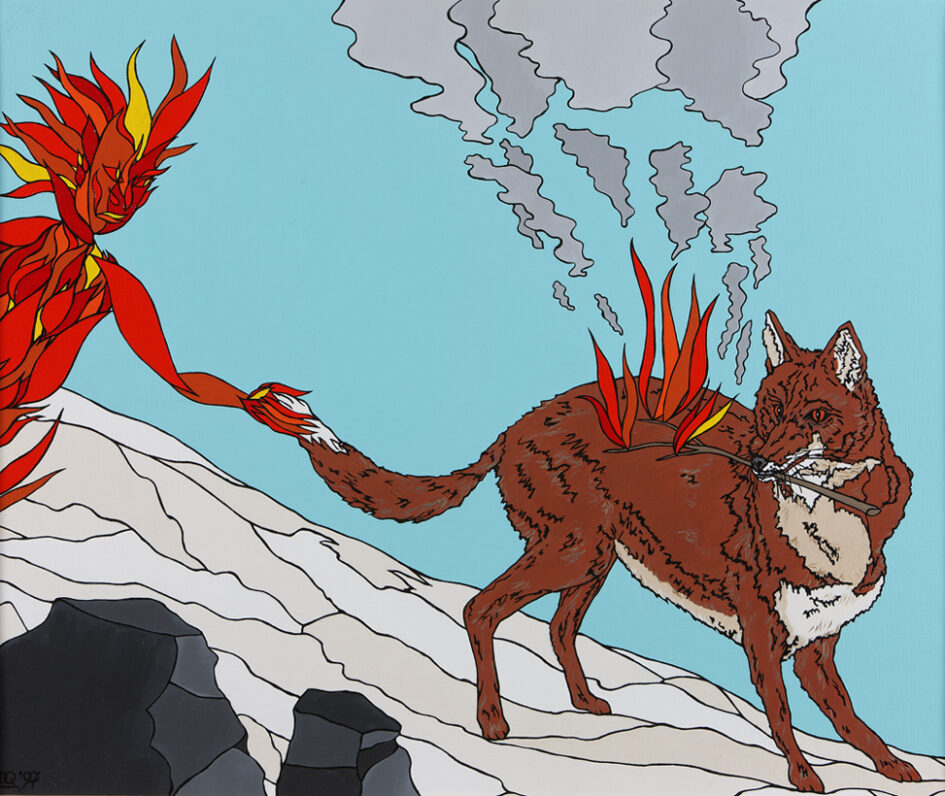 The winter air carried coyote’s song but there was another cry on the wind, mournful and chilling. Winter’s bite showed no care for young and old alike and the people of this cold, cold country wailed for their dead ones.

Coyote listened and promised to bring some of summer’s warmth and light to the people, he would bring them fire. The fire that smouldered hidden from man’s gaze on the bleak mountain top. Coyote had watched the fire beings guarding their secret flames, he knew he would need a clever plan. He called the other animals to help him, and they made for the craggy, white mountain top.

In the morning time while the fire beings shook off their dreams coyote slunk up. Nothing to startle them, only an old coyote prowling for food, but this one with a plan.

Coyote pounced and grasped a fiery brand in his teeth as the beings rubbed the sleep from their eyes, and he was away. Fire beings are fast, one is running after coyote making a grab for his tail. Coyote’s tail tip is singed white, as it still is today, but he has thrown the torch and squirrel has it, carrying it on his back.

Squirrel dances through the trees but fire beings can climb and are light on their feet. Squirrel’s back aches with the pain of the heat and his tail curls, as it still is today.

Before the being can catch him, there is chipmunk, she carries the flame. Fright froze chipmunk and she was so nearly caught, but there, she is away, but what are those white claw marks on her back that are still there today?

Chipmunk passed the burning branch to frog, but a being has him by the tail. He leaps away leaving his tail, and still has no tail today, but he has given fire to wood who has eaten it away.

No matter how the fire beings raged wood would not give up his charge, and now they are gone, heads hung low, back to their mountain top.

Coyote knows the secret, he shows the people, spinning a sharpened stick in a hole in wood’s side.

Man is warm, man can see in the dark night and man doesn’t howl in the long cold winter. He leaves that to coyote.

The painting shows coyote having his tail burned. Can you do a picture of one of the other animals in the story meeting the fire beings?

Can you make up a short story explaining a different way fire could’ve been brought to the people?

Hidden In A Name

Hiding inside the title of the painting, “Coyote Steals The Fire”, is the name of a type of duck and a species of tree. Can you find them?

The solutions to these and the other puzzles on this post are to be found by clicking + at Answers to Activities at the foot of this post.

The animals in the story left their tracks in the snow on the mountain side.

Look at the tracks below and see if you can guess who each set of footprints belong to? (Answers at the foot of the post)

Land of the Silver Birch

Land of the silver birch, home of the beaver,
Where still the mighty moose wanders at will,
Blue lake and rocky shore,
I will return once more.

Down in the forest, deep in the lowlands,
My heart cries out for thee, hills of the north.
Blue lake and rocky shore,
I will return once more.

High on rocky ledge I’ll build my wigwam,
Close by the water’s edge, silent and still.
Blue lake and rocky shore,
I will return once more.

Hidden In A Name