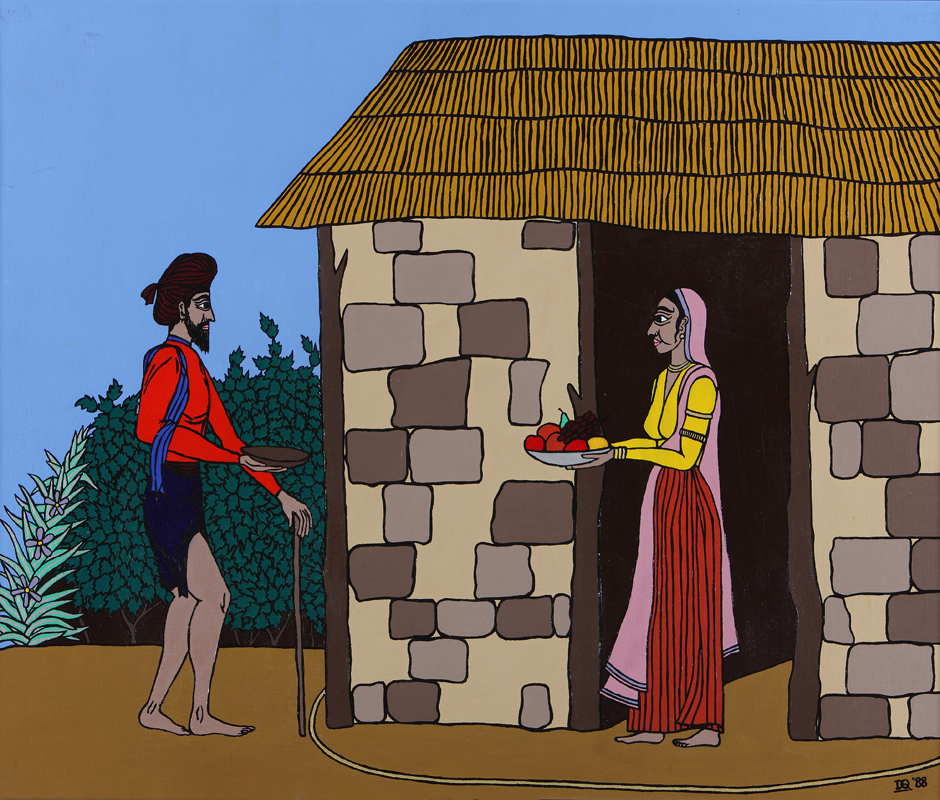 The Guile Of Ravana

An old holy man came to the hermitage and called upon Sita to give him food. It is every Hindu’s duty to give offerings to holy men and Sita did not hesitate. She took up a bowl of fruit, and forgetting her pledge to Lakshmana, she took the fruit to the hermit. As soon as Sita stepped out of the circle the holy man transformed into the monstrous form of Ravana. He took Sita in his arms and flew off in his hideous chariot drawn by mules with goblin heads.

Hinduism sets out a blueprint for life made up from four stages (Ashramas) for believers to live through. The stages are Brahmacharin or student, Grihastra or householder, Vanaprastha or hermit and Sannyasi or wandering holy man. Some Hindus pass through all four but most spend their adult lives as householders. Nowadays elderly people sometimes become a hermit spending most of the rest of their lives devoted to prayer while living in their son’s home. Some believers still retreat into isolation in simple forest hermitages to meditate and commune with the gods as they might have done many hundreds of years ago. When they have gained spiritual knowledge they adopt the life of wandering holy men spreading the teaching of Hinduism.

If Hindus do adopt the way of life of hermit or wandering holy man it is incumbent on others to provide them with food. It is thought that the hermit or holy man’s quest for religious knowledge and discipline will enrich all their fellows’ lives. This is why it was Sita’s automatic reaction to provide fruit for the holy man.

A globe like the earth has no east or west. Compass points can only describe directions from fixed points. The terms ‘western world’ and ‘eastern world’ were coined in the age of exploration, when great expeditions of discovery set out from the nations of Western Europe. The voyagers sailed in a westerly direction to find the Americas and sailed an easterly course to gain the treasures of China, India and the other countries and islands of Asia.

The labels have stayed in place to this day but are more a description of the different values that divide our ways of life. Civilisation in the western world is founded upon the importance of such values as individualism, materialism (what one owns), rationality (logical thought), and masculinity (the male side of our nature). Eastern civilisation is vested in very different principles; non-violence, renunciation (giving up personal power in favour of the greater good), the inner life (spiritual and religious needs), and the female side of our nature.

Many things have changed in the thousands of years of civilisation but these principles still seem broadly to hold good.

Civilisation describes the point of time when people come together to live in cities bound by common laws and established societies.

It is easy to see India as a country that was civilised when the British ‘discovered’ and colonised the sub continent in the sixteenth century. This is far from true. India was the home of one of the world’s first civilisations some thousands of years earlier, and has since hosted some of the world’s pre-eminent civilisations.

It was not until 1921 that archaeologists found the ancient cities of Mohenjo-daro and Harappa in the valley of the river Indus.

Established about 3000 BC, Mohenjo-daro had been the biggest city on earth, the centre of a widespread civilisation when the people of Britain were still cave dwellers. It had carried on trade with the few other civilisations throughout the world: Babylon, the Sumerian city of Ur, Crete and the Greeks.

That cities grew round the river Indus was surely no co-incidence. The flood plains must have provided very fertile soil. The river ensured a ready supply of fish and of water for irrigating farming land. The Indus also provided a main artery for transporting goods and establishing trading links. Water was of great importance in the lives of the people of Mohenjo-daro.

In the middle of the city archaeologists found a great bath probably used for ritual bathing. Ritual bathing is still at the centre of Indian religion today. Mohanjo-daro’s long straight streets interlinked by a system of lanes were laid with probably the world’s first system of drains. Each of the city’s mud brick houses seems to have had its own lavatory.

The language spoken is still a mystery, many seals have been found but the script they bear is as yet undeciphered. Some of these seals and various other artefacts have been discovered with decoration that looks very much like the Hindu god Shiva, making him, surely, the oldest god in the world.

By far the greatest mystery of archaeology is why and how the civilisation died out in about 1700 BC. Remains of unburied bodies in the streets at first suggested that Aryan invaders had sacked the city. Recently this theory has lost credence, as the bodies show no signs of having met with violent deaths. Some experts believe that a succession of bad harvests or a cycle of drought in association with a too rapid growth in population caused the city to decline and finally be abandoned, only to be used as a burial ground. They suggest the peoples returned to a more sustainable village life similar to that of two thirds of India’s 1,387,234,000 population today (early 2021).