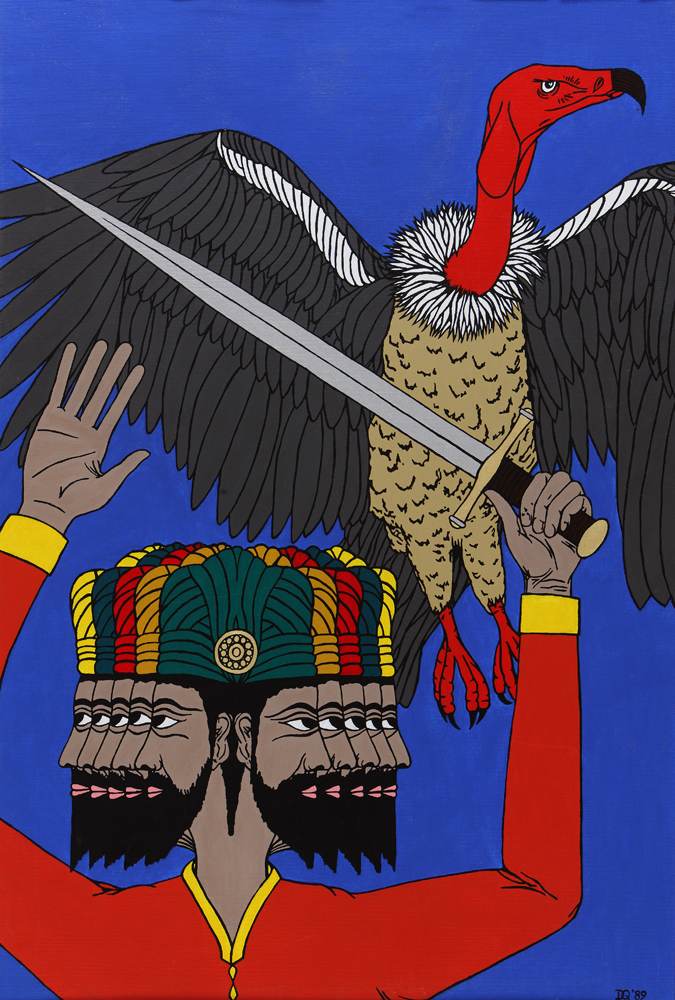 From a tree near the hermitage, Jatayu, king of the vultures, saw all and rushed to the aid of Sita. Jatayu’s was a noble fight, he flew again and again at Ravana and his chariot, but with one mighty sweep Ravana struck off both of his wings and he fell dying to the earth.

When the deer cried out Rama realised he had been tricked. Hesitating briefly, only to despatch the demon to it’s death, he rushed back to the hermitage. He was too late, Sita was gone. Lakshmana joined him and great was their grief and desolation.

Jatayu’s brother – a parallel with Icarus

In a later incident in the story we meet Jatayu’s brother, Sampati, who tells an interesting story similar to the Greek Myth of Icarus. When the brothers were young they decided to show how great they were by flying as high as the sun. They got too close. Sampati, seeing their peril, shielded Jatayu. Jatayu was saved, but the sun burnt Sampati’s wings and he fell onto a cliff top unable to fly. This was the same cliff top where, many years later, Sampati met Angada and Hanuman. He believed this to be fate, he was put there to guide Rama on his noble quest and to avenge Jatayu’s death.

The vulture in this picture is based upon the Black or King Vulture (Sarcogyps Calvus). It is a huge black vulture easily identified by its deep reddish head and neck. It lives throughout India, Pakistan and Nepal but is not to be found in Sri Lanka. Sparse and nowhere numerically abundant it is less gregarious than other vultures, although on very rare occasions they gather in groups of 20 to 30, but the reason is unknown. It likes semi-desert and open countryside near to villages or other populated areas. Highly beneficial as a scavenger the Black Vulture disposes quickly of animal carcasses from around villages where they would otherwise putrefy and breed disease.

Called the King Vulture because of a spurious reputation for boldness and overbearing pugnacity it is actually very timid. It keeps on the outskirts of any scrimmage around a carcass, nervously venturing forward for the occasional gobbet before hurriedly withdrawing. It is a very powerful bird and even when gorged needs only a few wing-beats to lift itself from the ground.

The fleshy flaps on the neck are wattles not ears. The ears are located just above the wattles. The wattles are of no real use, although it has been suggested that they flap over and protect the bird’s eyes when it is feeding on a carcass.

The male and female share the responsibilities of building the nest, incubating the egg and feeding the chick. They build a platform of twigs and sticks lined with straw and leaves as a nest. The nest is usually 9 to 12 metres up on the top of a large tree, such as a mango, near a village, but in semi-desert areas it might only be 2 or 3 metres from the ground on a small tree or bush. Pairs will use this same nest and nest site year after year and each season lay only a single white egg (incubation lasts about 45 days).