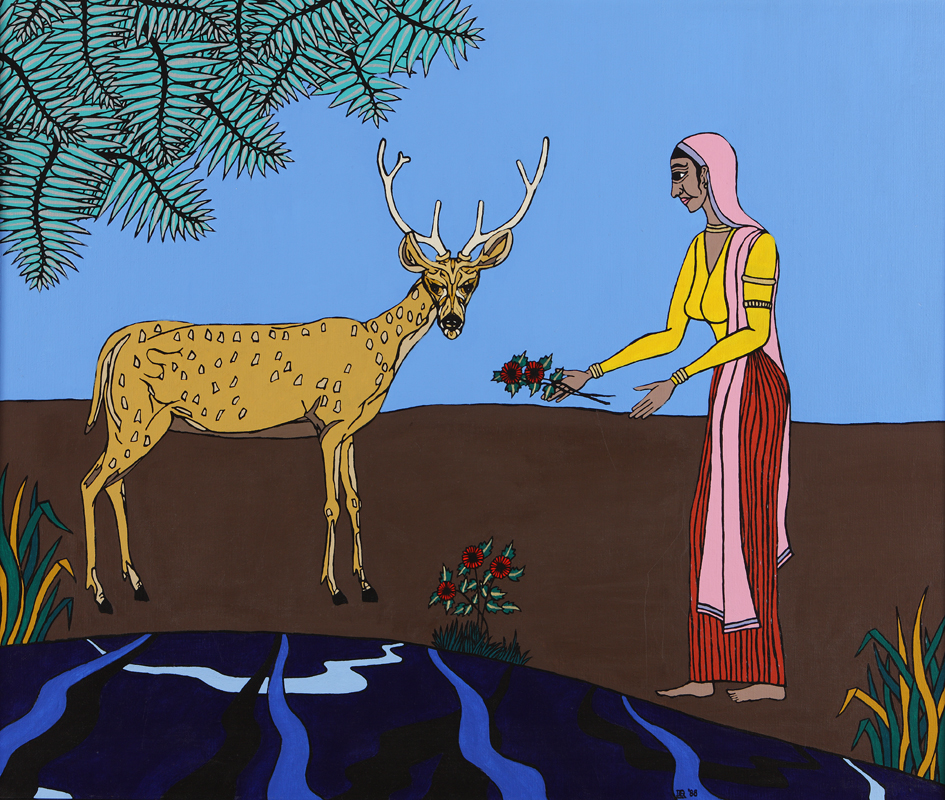 Sita In The Forest

Ravana, on hearing the tale, became enraged. When he heard of Sita’s beauty, greater than that of any of his wives’, he wanted her for his own. He would punish Rama by taking what was most dear to him, and at the same time get what he craved. He would kidnap Sita. In no time he hatched a plan and flew with a henchman to the forest.

Ravana’s helper turned into a beautiful deer and appeared to Sita who was picking flowers near the hermitage. Sita was captivated with the animal’s beauty and ran to Rama to ask him to capture it for her. Rama took pleasure in giving Sita her every wish and so followed the deer, which lured him deeper into the forest. Rama had left Lakshmana to guard Sita but suddenly there came a great shout for help. It was Rama’s voice but it was not Rama, it was the demon who let out the shout. Lakshmana’s duty was to stay with Sita but she pleaded with him to help Rama. Before racing to Rama’s aid Lakshmana drew a magic circle around the hut and told Sita to stay within its protection.

The deer in this picture is modelled upon two Indian deer, the barasingha, or swamp deer, and the chital, or axis deer.

The barasingha, one of the world’s rarest deer, has antlers covered in real velvet, which are much prized by hunters as a trophy. The more common chital is easily recognised by its spotted coat.

Deer are found all over the world nowadays but originated in Europe, Asia and North America. They are all related to cattle.

Mammals that have hooves are called ungulates. Ungulates are sub-divided into odd-toes species, like horses, zebras and rhinoceroses and even-toes ungulates such as antelopes, camels and deer. Even-toes animals have symmetrical feet that carry the weight on the two central toes, usually called the cloven hoof.

Deer, like most even-toed ungulates are ruminants. They have four stomachs to digest their food and chew the cud. That means they regurgitate part digested food from their first stomach, and when it is in their mouth, re-chew it.

Deer’s antlers, unlike antelopes’ permanent horns, are shed each year to be re-grown slightly larger in the next season. The antlers are bony growths covered in skin (velvet), and are usually branched. At the end of each season when the antlers are fully grown and ready to shed, the velvet dies off and much of it is rubbed away. Antlers are not only used as protection but are used in display fights during the rut (mating season). These fights establish the herd’s leading male.

Note on the Hindu Faith: Conduct Not Belief

Most important in the life of any Hindu is that they should live their beliefs. Following a creed is not enough, for one is judged on one’s actions.

Bhave left school with the aim of devoting his life to the poor of his nation, India. Starting as a disciple of Mahatma Gandhi, he spent his early life improving the conditions of poor villagers, raising money to provide them with schools, training programmes and other means of self-help.

In 1951 he devised and led a crusade for the landless labourers in Indian villages, called ‘Bhoodan Yajna’ (land-gift). Bhave walked across the length and breadth of India persuading the rich to give gifts of their land to the poor. The rich would win religious favour for their gifts, living the Hindu creed of selflessness. The movement was so successful that millions of acres of land were transferred to the poor.