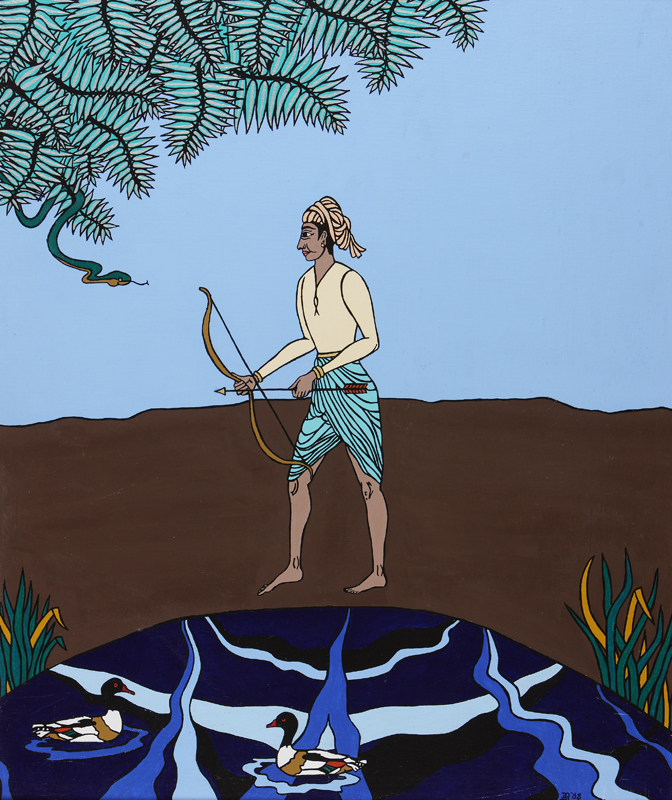 Rama would live out his exile as a hermit turning aside all trappings of his former life. He went barefoot with his faithful companions, Sita and Lakshmana deep into the Dandaka forest to build a hermitage.

Life in the forest, although lived in poverty, was a great joy to all three. Their love for each other and the pleasure they found in their surroundings sustained them.

Then, one day, their paths crossed with a grotesque demon so ugly they could hardly bear to look at her. It was Surpanakha, the sister of Ravana who lived close by with her brother Khara who ruled over the forest for Ravana. As soon as she saw Rama she fell in love and wanted him for herself. Rama and Lakshmana taunted her and told her to be gone. She rose in anger and flew at Sita, blaming her for keeping Rama’s love from her. Rama flung her aside and told Lakshmana to punish her. Lakshmana, with a single flourish of his sword, cut off the crone’s ears and nose and sent her on her way.

Surpanakha rushed to Khara who gathered up his demon horde and sped to kill Rama and his followers. No matter how many demons came forward Rama let forth arrows to pierce their hearts and soon they were all dead or defeated. Surpanakha, who had witnessed the battle and the death of her brother, fled to Lanka to tell Ravana.

The Ducks on the Pond

The ducks you see on the pond in front of Rama are Common Shelducks (Tadorna Tadorna Linnaeus). A strikingly handsome coloured duck with a distinctive red bill and pink legs, it can often be seen in the British Isles. It is a casual, uncommon visitor to India but can be quite plentiful in certain years. Both the birds in the picture are males; the female is considerably smaller and much duller coloured. The Common Shelduck feeds mostly on molluscs, crustaceans, insects and worms but occasionally eats algae, seeds, leaves and tubers of aquatic plants. It seems to prefer mudflats to water and therefore is found on large open lakes and rivers with mudspits and shingle banks. It is a gregarious bird liking to be within at least small parties. During our winter Shelducks fly south to warmer climates, mostly around the Mediterranean. The birds which reach India and Pakistan are more likely overwintering from northern Asia.

The Snake in the Tree

The snake in the picture is based upon the Emerald Pit Viper. I darkened the colours slightly so it would not assume greater prominence in the picture; its actual coloration is startlingly bright and would cause colour clashes with some of the more subdued tones.

Snake venom is a special kind of saliva. It contains many ingredients and is not only used to immobilise its prey but also to aid the digestive process. Having no limbs a snake cannot break up its prey in the normal ways other animals utilise so it has to swallow the prey whole. To achieve this snakes have a complicated loose hinged lower jaw made up of four bones. These allow them to expand their jaws so that very large prey can be swallowed. This is aided by their backward facing teeth which bar any escape. Because of their energy-saving way of life snakes can go for very long periods without food.

A Note on the Hindu Faith: The Cycle of Birth and Death

At the centre of the Hindu religion is a belief in re-incarnation. The human body grows old and dies. The spirit within lives on and is reborn in another form, either human or any other living thing. What form one is reborn into is governed by ‘Karma’, the law of deeds. If you have spent your life doing good things you will be reborn at a higher level, conversely if you have not lived up to the laws of Karma you will be reborn at a lower level.

The only way to break this cycle of birth and death is to attain ‘Moksha’. This is a high peak of spiritual awareness, which can only be achieved by devoting your life to prayer, meditation or selflessly serving your fellow men. Moksha means ‘release’, the soul merges with the spirit that governs all (the World Soul or Brahman) and lives in a state of eternal bliss and perfect knowledge.

Although Moksha is the ultimate goal in the Hindu religion most believers are more interested in living a good, happy, hard-working life. Hinduism is a faith that allows different levels of commitment from different people.