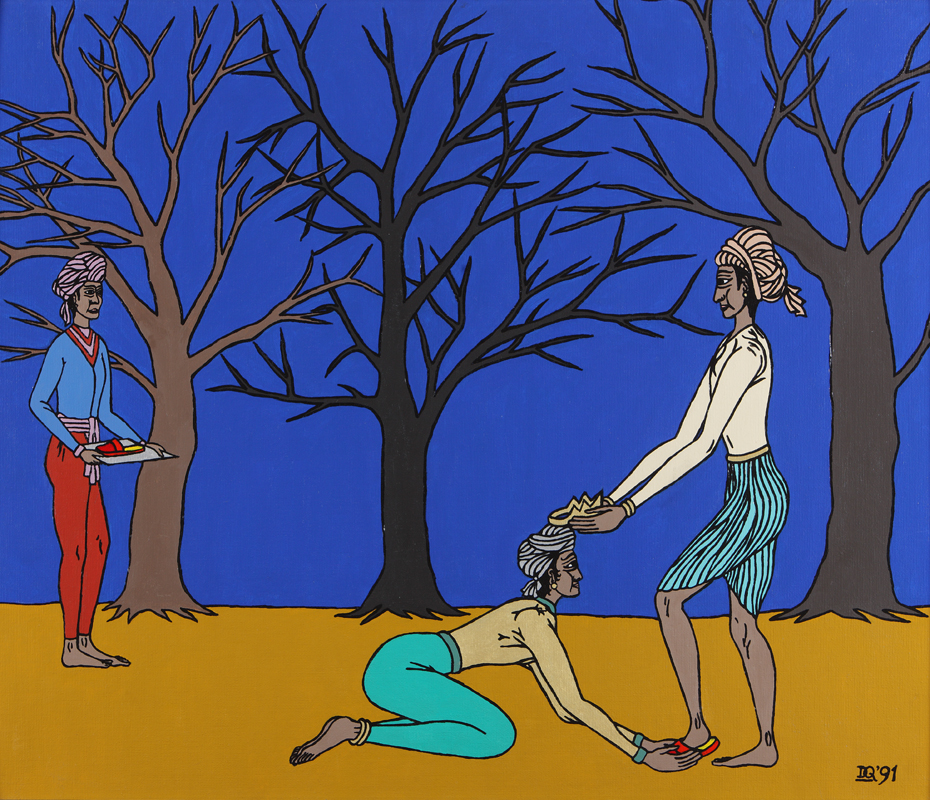 Overnight Ayodhya had turned to a place of mourning; all was grief for the loss of their prince to the wilderness. Sita and Lakshmana would not let Rama go alone but vowed to accompany him in his exile. King Dashrata descended into deep despondency and faded to his death.

Bharata went after Rama to tell him the news of his father’s death and to offer Rama the throne of Kosala that he had so unjustly inherited. Rama refused to betray his father’s honour and vowed not to return until the full course of his banishment was run. Bharata fell at Rama’s feet and promised he would never take the throne or wear the crown but would rule over Kosala as a caretaker awaiting Rama’s return. He asked Rama for his sandals and returned to Ayodhya to place them upon the throne until the day that their owner would be able to take his rightful place.

Modern day Ayodhya some scholars say is the legendary city in the Ramayana of the same name. Others question this belief saying the actual city only becomes identified as Ayodhya in the 4th or 5th Centuries long after the period of the legend. Hindu extremists pulled down a Moslem Mosque in 1992. These Hindus claimed the Mosque had been built on the site of Rama’s birthplace. The situation is very inflammatory, Muslims wish to rebuild their Mosque. On 5 February 2020, the Government of India announced that a Ram Temple should be reconstructed on the site of the Mosque. It also allocated an alternative site for rebuilding the Mosque at the nearby village of Dhannipur which already has four Mosques.

Many rulers and conquerors had tried to unite India in its thousands of years of civilisation, but it was not to be politically united until the colonisation of the British was finally completed in the 19th century. For most of its history India has been divided into kingdoms ruled by wealthy princes.

Despite these facts, as enshrined in the Mahabharata (1,000 BC) Indian people have held the belief that India is one nation.

The caste system is a basis for social division in Hindu society. Every Hindu is born a member of a caste or group; this will be the group to which the child’s parents belong. All the castes are ranked in order of importance and, following the belief in reincarnation, your caste is determined by the deeds performed in your previous life.

There are four large groups in the Caste system called the four Varnas. The highest caste are the Brahmins, they are the purest caste who perform all religious ceremonies. The Kshatriya caste are rulers and warriors. The Verity caste is made up from craft and trades people. The Shudra caste is the caste to which all ordinary workers belong. There was a fifth group outside the caste system of ‘untouchables’ who were considered unclean and were given all the dirtiest jobs, but in modern India classifying people as ‘untouchable’ has been banned. All these caste groups have many sub-divisions called ‘Jati’; these may decide a person’s exact job.

A Religion for the Western World?

Most large towns in Britain have at least one temple. There are relatively few non-Indian Hindus, but there is a growing interest among westerners in Hindu teachings. The search for inner peace and spiritual enlightenment holds great fascination in comparison to our materialistic world.