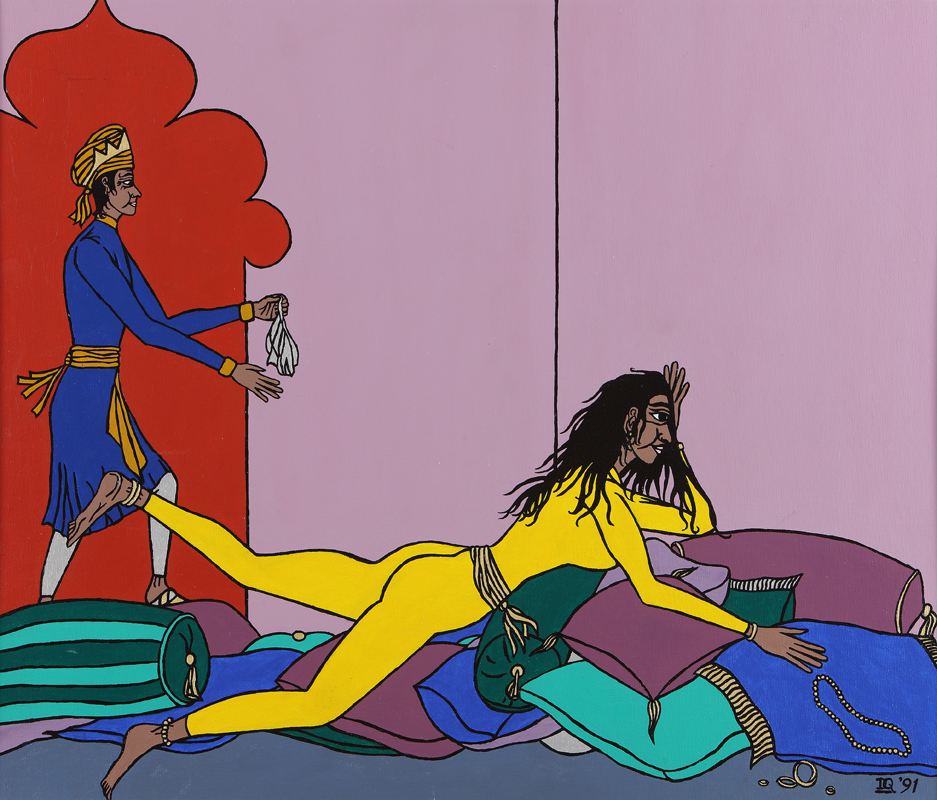 In the royal palace at Ayodhya, idleness had caused fears to breed in Queen Kaikeyi’s mind. Kaikeyi, being the youngest and most beautiful of Dashrata’s wives could always have whatever she chose. What would her life be like when Rama took his father’s throne? Surely she would no longer command such a position of power and affection? Although she had no cause to worry, because Rama loved her like his own mother, her bitter hunchback maid, Manthara saw her fears and wrought an evil scheme. Manthara fed Kaikeyi’s fears and they grew and grew until Kaikeyi was at her wit’s end. Manthara reminded Kaikeyi of the two wishes Dashrata had granter her when Kaikeyi had saved his life. Kaikeyi had never taken these wishes, surely now was the time, Bharata could be king and Rama could be banished from the kingdom.

Kaikeyi went into the anger chamber; a room set aside for venting all bad feelings, and threw herself on the floor. It, as she knew, was not long before Dashrata came to her to offer comfort. When Kaikeyi told him her wishes he was thunderstruck, he could not break his word, how could she ask this of him? He was heartbroken and his future was now just dark shadows.

Dashrata called Rama to him but could not bring himself to speak. Kaikeyi wasted no time telling Rama the news. Rama accepted his father’s wishes with grace, knowing Bharata would be a just ruler, and prepared for his banishment.

As you can see from the story this episode of the Ramayana deals with a great many of the more negative human emotions. Often we are taught to hide these emotions but in the Hindu society it is considered very important to come to terms with the darker side of our personalities.

The anger chamber is a prime example of Hindu society developing techniques to deal with negative emotions. The chamber is a bare room filled with cushions where anyone can go to ‘let off steam’ in safety. The room has certain conventions, jewellery should be removed so you cannot injure yourself with it; comfortable, casual clothing should be worn; and your hair should be let down so you can really let yourself go. In this way people can come to terms with their own feelings having got rid of the physical side of their emotions and this is accomplished in safe surroundings away from others.

Not every Hindu household has an anger chamber; they are only to be found in palaces and the homes of the rich. The principle of venting emotions is common, however, to all Hindus’ lives. Loud emotional scenes of grief surround deaths in India, cleansing themselves of physical effects people can then come to terms with their loss more easily.

One of the major conventions of Hinduism and many other Eastern religions is non-violence; doing no harm to any other living thing. Jain monks go as far as to sweep the ground with soft feather brushes before they walk on it in case they tread on invisible life forms. They also strain all their drinking water. Buddha first preached the creed but its enshrinement in the Hindu faith is also due to two great Indian rulers, Ashoka and Akbar.

About 300 BC the great Buddhist emperor Ashoka made the first attempt to impose a political unity on India, known as the Mauryan empire.

After a great battle in which Ashoka killed 100,000 people he became convinced that war was wrong. He turned to the Buddhist faith and set about developing the idea of Ahimsa. He wrote a secular creed to enshrine the principles of compassion, tolerance, gentleness, truthfulness and non-violence and had this inscribed on pillars, which he had erected throughout India. His creed even detailed environmental principles, one passage says ‘forests must not be burned uselessly’. Ashoka also made a personal pledge: ‘From now on I will try to conquer by right conduct alone’.

In the 16th century AD the Moghul Emperor Akbar the Great again tried to unite India. He attempted to find a synthesis of all the religions to bring his peoples together around a simple belief in god. Although Akbar was born and brought up as a devout Muslim he recognised that religion acted as a divisive rather than uniting force in his empire.

Akbar’s creed echoed that arrived at many centuries before by Ashoka, although Akbar had never heard of his predecessor. The creed acknowledges the rightness of non-violence and vegetarianism. However, a meat lover himself, Akbar never could accept vegetarianism for himself. Akbar created a kingdom where all, regardless of religion, had equal rights. His empire like that of his forerunner Ashoka, became an empire united by spiritual values not an empire sustained by the sword.

Akbar wrote: – ‘It has become clear to me that, on our troubled world so full of contradictions, it cannot be wisdom to assert the unique truth of one faith over another. The wise person makes justice his guide and learns from all’.