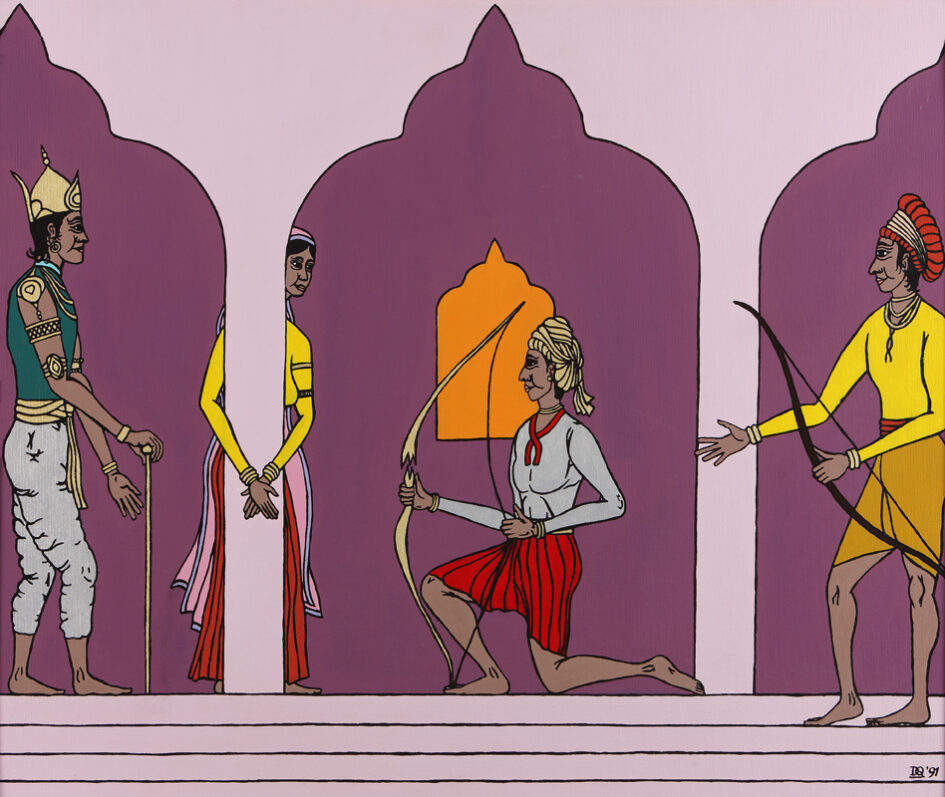 And Then The Bow Cracked

The beauty of King Janaka’s adopted daughter, Sita, was famous throughout all India, and it so happened that a great party of suitors for Sita’s hand was taking place in the King’s palace in Mithila at that time. King Janaka would only give his daughter in marriage to the man who could string a great golden bow, and prince after prince stepped forward to attempt this task only to fail.

Rama came forward and took the bow, resting one end against his foot he bent and strung the bow easily. He pulled back the bowstring and a sound like a crack of lightning echoed throughout the city of Mithila. The bow broke into two in his mighty hands. Sita was to be Rama’s wife, everyone rejoiced.

Rama returned to Ayodhya with his beautiful bride and they were welcomed with an elephant procession through the streets.

There is no normal time of day for a Hindu wedding ceremony, priests consult astrological charts and choose the time when the stars and planets are in the most favourable positions. The wedding probably won’t take place in a temple but in a garden, courtyard, blocked street or square near the bride’s house.

The Brahmin (priest) sits under a canopy decorated with chains of beautiful flowers, marigolds, jasmine and roses. The bride and groom approach from opposite directions, the bride dressed in a red sari adorned with gold jewellery accompanied by female relatives, the groom surrounded by friends and relatives, riding a white horse, follows a band of musicians, his face is covered by a veil of flowers. When the bride and groom meet they exchange garlands, placing the flowers around each other’s necks.

The ceremony is performed in front of a fire lit in a special metal vessel. The priest recites sacred texts and hymns while the bride and groom pour offerings of rice and ghee (clarified butter) into the flame. The most significant point comes when the bride’s sari is knotted to the groom’s kurta (long shirt) and the couple walk around the sacred fire seven times. This ceremony is based on Rama and Sita’s marriage and has changed very little over the last 3,000 years.

All Hindus are taught tolerance towards other religions and peoples and respect for elders. Family decisions are made by the oldest members, and many teenagers are happy to have their marriage partner chosen for them. They trust their elders’ knowledge and experience will make a wise choice. Hindus believe love grows gradually after marriage and there are many very happy marriages that show the success of this.

Sita was King Janaka’s adopted daughter. A daughter of the gods, hidden under the ground she was found in a furrow after the King’s ceremonial golden plough turned the ground. Some people believe she was the goddess Lakshmi born in earthly form.

In some versions of the Ramayana once Sita is rescued and Ravana defeated Rama begins to doubt her, having lived under another man’s roof. Sita proves her purity by walking into a funeral pyre, which does not burn her. Later, after the return to Ayodhya, when rumours start to spread through the city Rama, unhappily, sends her away. She lives alone in a forest hermitage where finally, in her grief and loneliness, she asks the earth to swallow her up. The ground opens below her and she returns to the furrow.

Notes on the Hindu Faith: Pluralism

Unlike the Christian belief that there is only one pathway leading to God, through Jesus Christ, Krishna taught Hindus that there are many paths that can be taken and, although different in many ways, they all lead to God. Mahatma Gandhi, the Hindu leader responsible for leading India to independence from British rule, said ‘we should not pray for believers of other religions to be converted to our faith, but pray that they become better followers of their own faith’.

Although the Hindu religion enshrines this respect for other religions there has long been hatred in India between Muslims and Hindus. In 1947 this came to a head when the British split the country into Hindu India and Muslim Pakistan. Dreadful battles and massacres took place and thousands were killed in the violence – Muslim and Hindu alike. Mahatma Gandhi made many attempts to stop this fighting but was murdered by a Hindu who believed he was too friendly with the Muslims.

Today a major source of confrontation between Hindus and Muslims is Rama’s birthplace in Ayodhya.