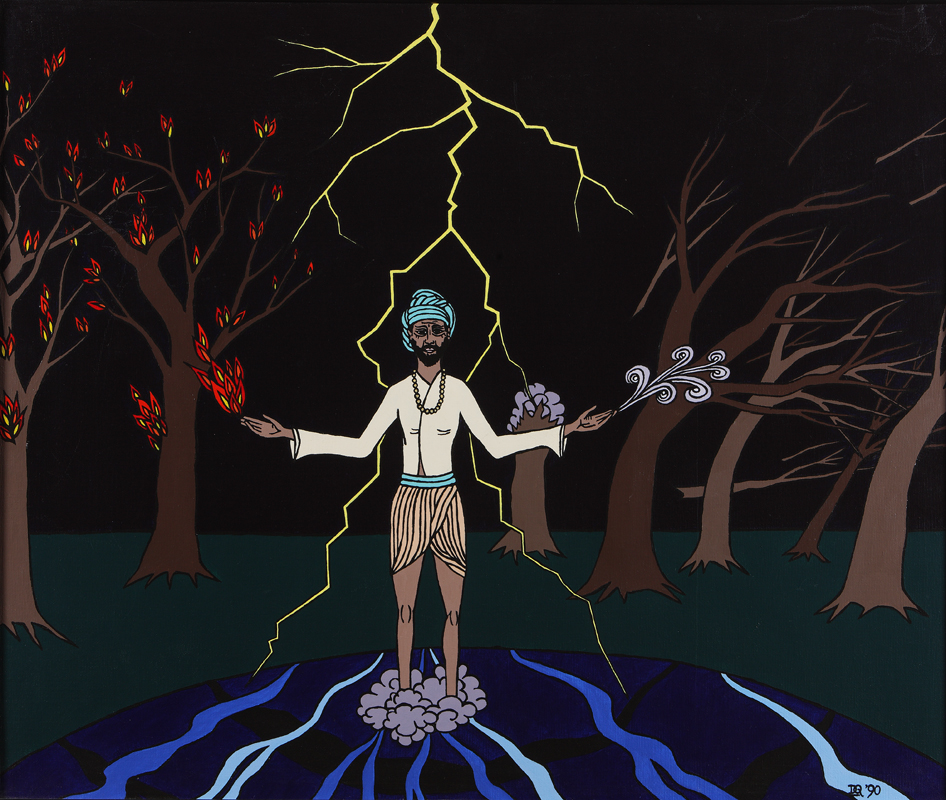 When they arrived the sage taught the boys the arts of fighting demons and gave to them the use of divine weapons known only to him. There was the wind god’s power; the blast of Agni, the fire god; the thunderbolt of Indra, the god of heaven; and lastly, the most powerful weapon, the gift of Lord Brahma, which took on any shape or form and was the very noose of death. The boys mastered the use of all these weapons and learnt great spiritual knowledge from the old man. They were ready to face the demons and stood steadfast guardians of the sacrificial altar.

When the demons saw the smoke rising up towards the heavens they rushed in great numbers to disrupt the sacrifice but were met by the might of Rama and Lakshmana. The demons were filled with fear when they felt the blows of the noble young warriors. Rama killed the leader Maricha with an awesome thunderbolt, Lakshmana pierced another demon’s heart with a spear of fire and the demons were scattered with the wind god’s weapon.

The old sage bid them farewell and Rama and Lakshmana, now both men, set off to return to Kosala. On their way back they had to pass through the kingdom of King Janaka.

Not Just Skilled with Weapons – Yoga

Yoga in the west today is seen as a form of exercise or a way to keep fit. In reality it is a system to train the body to aid the mind’s search for oneness with World soul (the spirit that governs everything). In a recent scientific test in Delhi, Yogis and Yoginis (males and females who practice yoga) showed that they could control their breathing and regulate their heartbeats. They could also withstand extremes of hot and cold with no physical reaction.

Lord Brahma, the god of creation is one of the trinity of major Hindu gods together with Shiva and Vishnu. Today his importance has diminished as most Hindus belong to sects with Shiva, Vishnu or Devi (the goddess) as their main deity. Brahma is usually portrayed with four heads and four arms riding upon a swan or goose. He can be shown carrying the Vedas (the holy books), a sceptre, prayer beads, a water pot, a sacrificial spoon or a bow.

Varu, the wind god, is one of the lesser gods but also has great power being seen as the life giver and the bringer of fragrance to the world. He is also the father of Hanuman, the monkey who plays a major role in the Ramayana.

Indra, the bringer of rain is the guardian of the heavens and a great warrior as well as being a storm god. He rides upon a massive white elephant called Airavata, which is shown with four tusks. Indra lives atop Mount Meru in the Himalayas between heaven and earth.

Agni, the fire god, acts as a link between people and the gods. It is within his sacred flames that messages are taken from the earthly to the heavenly realm. Agni consumes sacrifices and offerings and takes them as his fires cleanse the world of sin. Agni is portrayed with three heads behind which flames flicker. Agni’s vehicle is Vahana the ram.

Lord Vishnu, in the context of the Ramayana, is worthy of special mention. Vishnu is the preserver and protector of all living things. Whenever the world is threatened he comes to the earth in worldly form to save us from peril. One of these earthly guises (avatars) was the Prince Rama, his mission to rid the world of Ravana, the evil ten-headed demon.

In his godly form Vishnu wears a tall jewelled crown and is often seen seated upon a throne. Usually he has four arms in which he carries a lotus, a conch shell, a discus and a club. His vehicle is an eagle-like creature called Garuda (often depicted as half-man, half-bird).

The Ten Avatars of Lord Vishnu