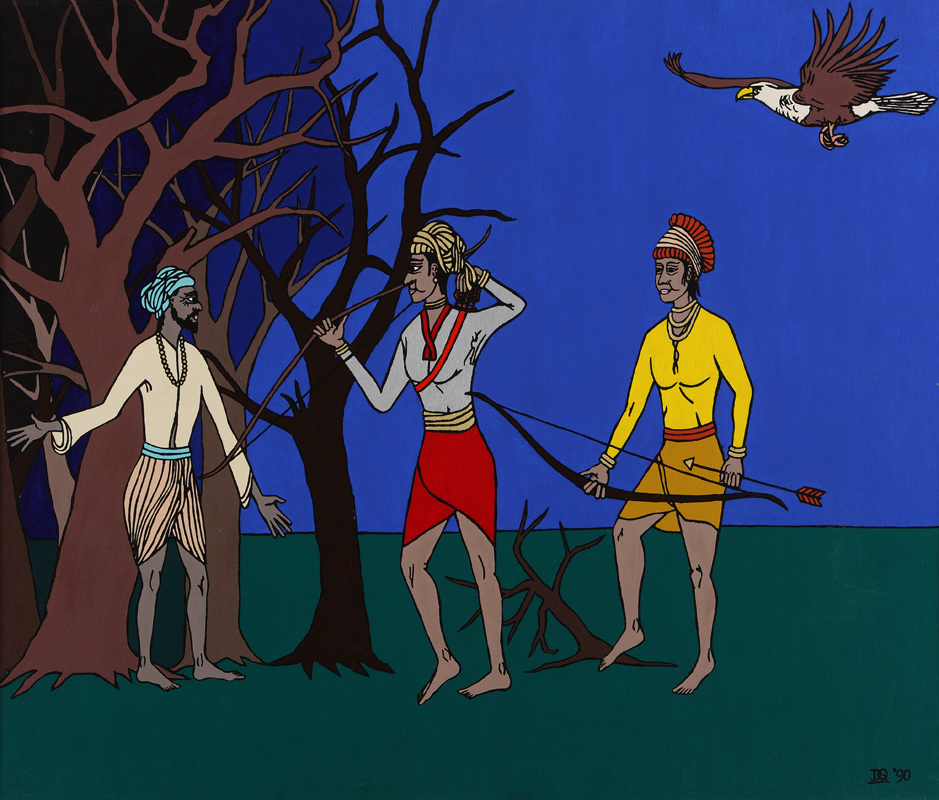 Into The Impenetrable Forest

All was well in the kingdom of Kosala until the boys reached their sixteenth year, when an old sage came to plead with King Dashrata. The old sage lived in a hermitage deep in an impenetrable forest and devoted his life to prayer. His devotions, however, had lately been disrupted by demons wrecking his sacrificial offerings. He came to ask King Dashrata for the aid of his two eldest sons, Rama and Lakshmana, to defeat the demons. King Dashrata was devastated and feared for the lives of his sons, but could not refuse the holy man’s request.

The old sage led Rama and Lakshmana into the impenetrable forest to his hermitage.

The eagle in this picture is the White-tailed Sea Eagle (Haliaeetus albicilla Linnaeus). It is a huge dark brown eagle with whitish head, neck and upper breast and distinctive wedge-shaped tail. Although essentially a sea eagle it wanders inland following large rivers. It is a winter visitor to India and Pakistan and once could be seen in the northern British Isles on the limits of its range, but sadly no more. It is a sluggish bird and will sit for hours hunched and inert by fringes of water. It lives mostly on fish, which it scoops with its talons from just below the surface of the water, while sailing above the surface. It will occasionally catch ducks, small mammals and carrion to augment its diet. The call of the White-tailed Sea Eagle has been described as ‘a low yelping noise reminiscent of a puppy dog’.

Aryan Peoples (the Ramayana is based upon an ancient Aryan folktale)

The Aryan people of Northern India were nomadic cattle herders who first started to arrive in India about 1,500 BC when the Indus valley civilisations were declining. The Aryan tribes came from around the Caspian Sea in Central Asia. Not all Aryans migrated to India, some moved into Europe and others to Arab countries. One group moved as far as Ireland, and the word Eire is a corruption of Aryan. Iran is also another form of the word Aryan.

The Aryans did not invade India but moved in gradually over many years. Their knowledge was superior to that of the local peoples and they soon came to dominate the areas into which they moved. They had discovered how to smelt bronze into tools and weapons and could overwhelm anyone in battle, should the need arise, where they used chariots.

Soon the Aryan’s traditional lifestyle began to change. They stopped being nomadic herdspeople and took up agriculture, which demanded a more settled way of life.

By 500 BC the Aryans had built up a dominant culture along the valley of the Ganges river. The ideas and traditions they had brought with them had mixed with those of the local peoples to form the foundation of Hinduism as we know it today.

The term ‘Aryan’ was much abused in the 20th Century, particularly before and during the 2nd World War by the fascist leader Adolf Hitler. Hitler said that the Aryans were the ‘master race’ of which his German countrymen were a part. However there is no connection between Hitler’s political propaganda and the historical facts of the nomadic tribes of the Caspian Sea 4000 years before.