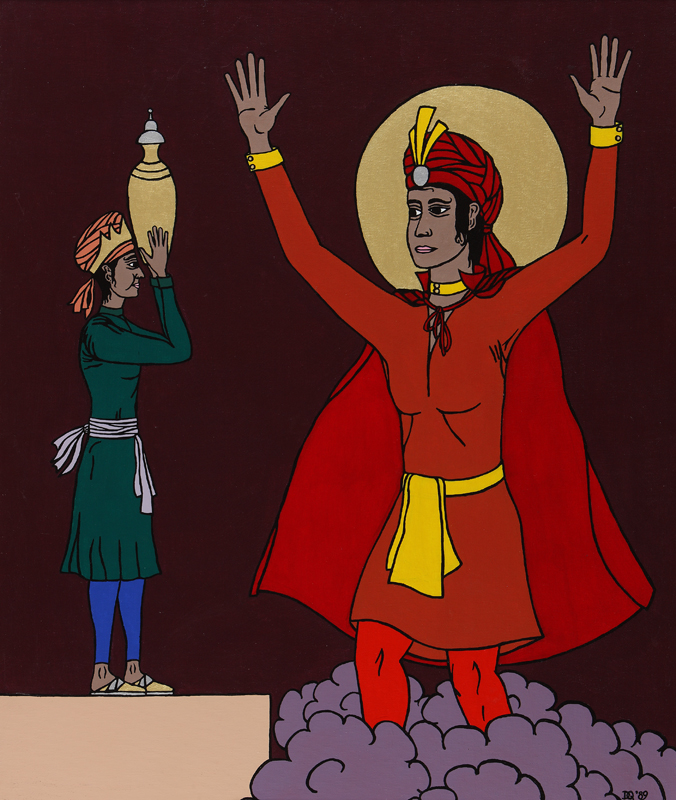 In the north of India long ago was a rich and wonderful city, Ayodhya, capital of the kingdom of Kosala. The noble warrior King Dashrata ruled over the kingdom wisely. He was respected by friends and enemies alike and life in Ayodhya was peaceful and happy.

Only one dark cloud marred life for King Dashrata, he had not been blessed with an heir. He had three wives but still no son and he was now an old man. Dashrata prayed, above all else, for the gift of a son.

The gods had reason to hear King Dashrata’s prayer. Far to the south on the island of Lanka was an evil kingdom ruled over by the most wicked demon of all, Ravana. That evil ten-headed demon had been granted a boon by the gods, that no god or demon would be able to end his life. Now Ravana and his evil horde rampaged through heaven and earth the gods had come to regret the granting of that wish. It would take no ordinary man to kill Ravana, what were the gods to do? It was then that Lord Vishnu came forward and offered to come to earth in human-form to rid the world of Ravana.

King Dashrata stood before his sacrificial fire offering up his prayer and the gods saw how to enact their scheme. A giant messenger appeared to Dashrata through the smoke and flames bearing a gift from the heavens. The messenger gave King Dashrata a golden pitcher with a silver lid; it was filled with celestial food to be fed to the king’s three wives.

Dashrata rushed off to his first wife, Kaushalya, and made her eat half of the food. He then divided the other half between his other wives, Sumitra and Kaikeyi.

The gods had answered King Dashrata’s prayer; Kaushalya gave birth to a beautiful son, Rama. Sumitra had twin bows, Lakshmana and Shatrughna, and Kaikeyi gave birth to a son, Bharata.

The boys grew to be brave and strong, and were devoted to each other. Lakshmana was inseparable from his elder brother, Rama, and Shatrughna and Bharata were always to be seen together.

Agni is the god who acts as a link between people and the gods. It is within his sacred flames that messages are taken from the earthly to the heavenly realm. Agni consumes sacrifices and offerings and takes them as his fires cleanse the world of sin.

Fire is very important still in Hindu life and ritual. Every marriage takes place around the sacred fire and at death bodies are cremated, their souls purified in the funeral pyre. In everyday life the cooking fire is the centre of every Hindu home.

Agni is portrayed with three heads behind which flames flicker. All Hindu gods have a vehicle, an animal or fictional beast for them to ride upon. Agni is usually shown riding on a ram called Vahana.

The word Agni (through Latin) has given us English words like ignite and igneous.

As many Hindus believe in not harming other living things, life being sacred, most are vegetarians. Most of these vegetarians do not eat eggs and some will not eat strong tasting foods such as garlic and onions.

Even non-vegetarians do not eat meat regularly, as the climate of India makes meat difficult to keep and it is also very expensive. In Indian villages there is very rarely a refrigerator in any house. Hardly anyone would eat beef because of their high regard for the cow as a sacred animal.

The Indian diet makes use of high protein foods such as lentils. Milk and milk products are also widely eaten, this is one reason why the cow is so revered. A typical north Indian meal would consist of a spicy vegetable dish using, say, cauliflower or potatoes; a lentil dish called ‘dal’; and a home-made bread (chapati, paratha or naan). A dessert might also be served. This would be made from milk and / or cream sweetened, probably with sugar, and flavoured by almonds, rosewater or the like. In south India rice would replace bread as a part of the meal and the methods of cooking would vary. In India there are hundreds of regional styles of cookery.

Caste now really only plays a part in eating habits in villages and distinctions have died out in the big cities. The idea of ritual purity meant that no one should accept food prepared or touched by one of a lower caste.

Feasts gained an importance in Indian life from the Muslim roots of the Moghul dynasty. Wealth and feasting are not against religious laws.

Fasting too is important in Hindu life, many Hindus fast on certain holidays as a religious discipline. Some devout Hindus fast once a week, while more observe regular partial fasts taking only liquids and / or special grains.

World Soul is the concept at the very centre of the Hindu faith, like the Holy Spirit in Christianity. World Soul is the spirit that governs all and lies beneath everything. It is present everywhere in the universe.

The religious texts ‘The Upanishads’ say it is a part of everything but above everything. It is immeasurable, beyond understanding, it is never born nor does it ever die. It is amongst all the things of the world but at the same time is perfect ‘Oneness’.