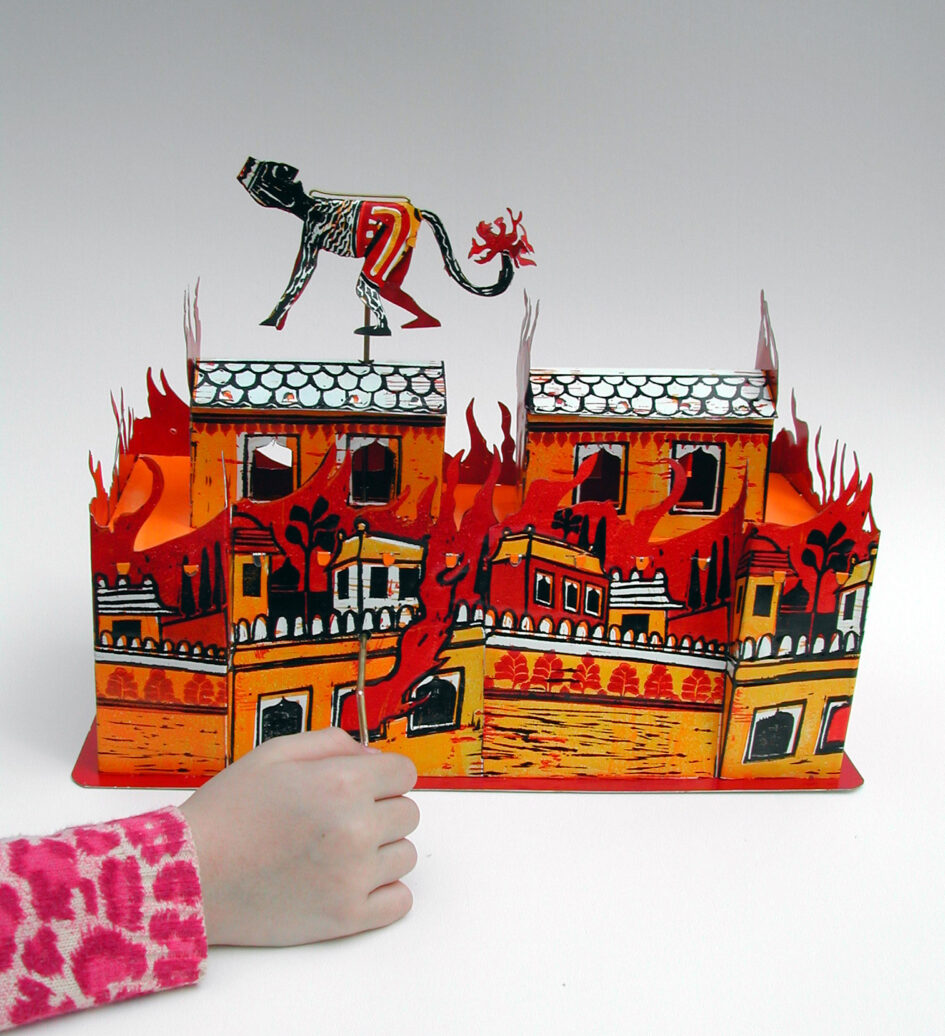 The story of The Ramayana is presented here as 15 separate posts each accompanied by an acrylic painting by Dez Quarréll and some posts are augmented with photographs of automata created John Grayson as part of an “illuminate” project funded by the National Endowment for Science, Technology and the Arts (NESTA). Here, by way of an introduction, are some general background facts about The Ramayana (each post features more detailed background facts pertinent to that particular part of the tale)…

The Ramayana is one of the two great Indian epics, the other being The Mahabharata. The most common version is a poem of 24,000 couplets, composed by the sage Valmiki in the 4th century BC, although it was not written down until the 6th century AD, having until then been passed from mouth to mouth, learnt by heart. However the story had been told and retold for centuries prior to Valmiki’s composition. The story spread from the North East of India to the rest of the country and many different versions have been written ever since.

The Ramayana tells the story of Rama, an incarnation of Vishnu, whose mission is to kill the evil demon Ravana whom the gods have endowed with invulnerability from the attacks of gods and demons. The story follows Rama’s life from his divine conception through childhood; marriage to the beautiful Sita; banishment from his kingdom; fourteen years spent in exile in the wilderness; the abduction of his beloved wife; his long search to find and free her; his triumphant battle with Ravana; and his joyful return to the kingdom of Ayodhya. It is an intensely moral story, which covers all emotions.

Scholars believe the story has an historical context and evolved from a true story. The events that form the basis of the story probably took place during the early days of the Aryan occupation of Northern India. Rama was likely to have been the son of a chieftain of a small state. The monkeys of the story, it is believed, were a friendly tribe of people who inhabited the enormous forests of Central India, uncivilised compared with the Aryans. The demons were probably an alien race that had made their home on Sri Lanka and were beginning to invade the Southern Indian mainland. However the historical context pales into insignificance when compared with the religious importance of the story.

The Ramayana is one of the most important gospels of the Hindu faith. Rama is an avatar (an incarnation of Vishnu), as in a lesser degree are all his brothers. Sita is both woman and daughter of the gods, found in a furrow of ploughed ground by her father King Janaka. Some believe she is an avatar of Lakshmi, goddess of beauty and fortune.

The Hindu trinity consists of: Brahma, god as creator; Vishnu, god as preserver; and Shiva, god as destroyer and re-creator. Vishnu steps in whenever there is trouble in heaven or on earth and was born as Rama to save the world from the personification of evil, the demon Ravana.

Rama and Sita are the ideal man and woman, examples to every boy and girl. Unlike the solitary figures of Jesus and Buddha, Rama is the perfect son, brother, husband, warrior and king, an earthly rather than purely spiritual example. Sita too is the perfect woman; tender, compassionate and devoted.

Today many boys and girls are named after these heroes, the marriage ceremony in many parts of India is based upon their marriage, and their words are learnt by heart.

The India of today may be much altered from the India of the story but it is still the same country. The places in the story are actual places where today’s people make pilgrimages; Hanuman Langurs still roam around villages looking for food and making mischief; Sita’s clothes are much the same as the clothes worn by women throughout India today. This gives this tract a continuity that no other religious story can claim. The Ramayana has remained throughout the centuries part of everyday life; told, read and acted out in cities; recited by storytellers in the smallest most isolated villages much as it would have been centuries before Christ.

In September or October in Northern India the festival of Dussehra (Dasera) is centred on the Ramayana. Over the ten-day festival the people celebrate Rama’s victory over Ravana. The story is acted out in a sort of pantomime called Ram Lila (the play of Rama). Huge effigies of Ravana are made and at the end of the performance destroyed or blown apart with fireworks and firecrackers. On a smaller scale children make small clay or mud statues of Ravana and smash them to symbolise the victory of good over evil.

Diwali, the festival of light and the Indian New Year (usually in October) commemorates, in some areas of India like Punjab and Gujerat, the coronation of Rama, and his triumphal return. Lights were lit in every window of the city of Ayodhya to guide Rama and his friends home.

“Rama is ever pleased with those who listen to his story or who tell the whole of it, and those who do so will attain happiness like unto that of Rama, he whose deeds are imperishable, he who is Vishnu, the eternal, the lord. May prosperity attend you! Recite it with love and may the power of Vishnu increase!”