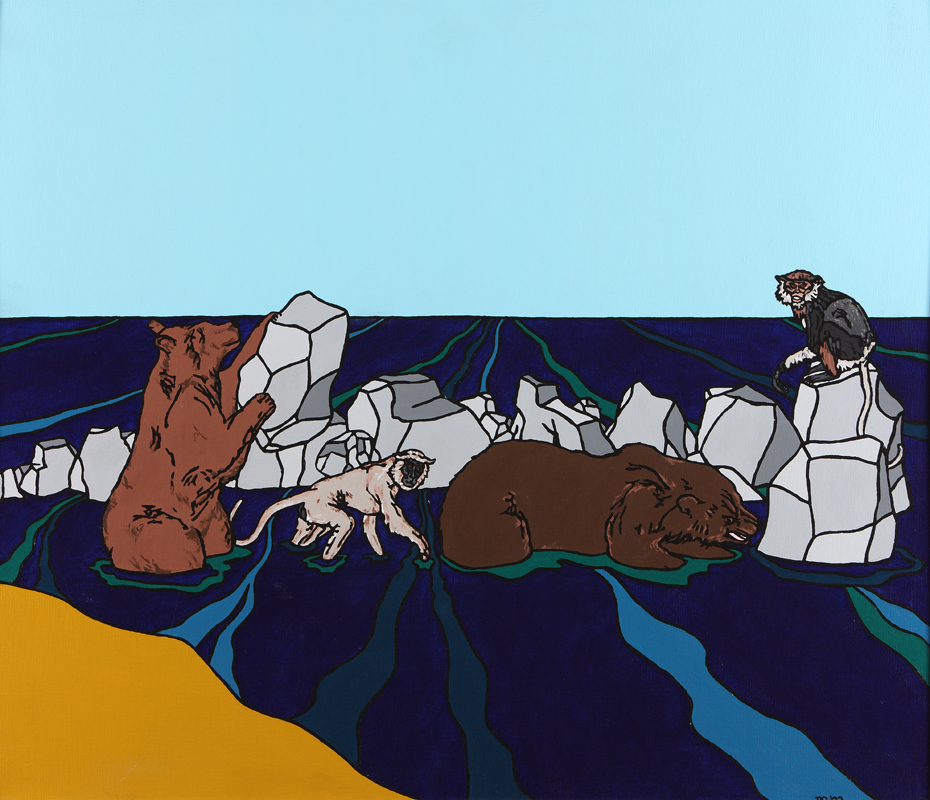 When Surgriva and Rama heard the news all was forgiven and every energy was put into planning the forthcoming attack. A great army of monkeys and bears marched towards the ocean. One of their number, Nala, was a son of the architect god and on their arrival he set about building a great causeway to Lanka. The army advanced, victory was to be theirs.

Ravana saw the approaching legions and called to his brothers and son to prepare to fight. His youngest brother, Vibishana, would have nothing to do with Ravana’s fight; he left the city and went to Rama. Rama’s friends feared him as a spy but Rama protected him and took him by his side. Vibishana told Rama all Ravana’s strengths and weaknesses and in return was promised the throne of Lanka when the battle was done.

Ravana’s second brother, Kumbhakarna, was an awesome giant who slept for six months to wake for only one day. On hearing of the attack he rose up and spitting arrows and flames attacked the invaders. The smaller bears and monkeys were terrified when they saw him approaching but he was no match for Rama, who let fly one of the god’s arrows and struck off his head.

Ravana was enraged. He called his son Indrajita to prepare for battle. Indrajita was a mighty warrior, indeed he had once defeated Indra, the god of heaven, in combat to earn his name. Lord Brahma had paid dearly for Indra’s return, as long as Indrajita paid tribute with sacrifices to the fire god Agni he could use that great god’s chariot in battle, which would make him invisible to all his enemies. Indrajita would be invincible whenever he rode in Agni’s chariot.

Indrajita flew at Rama’s army letting loose thunderbolts, spears, arrows and venom: the effect was awful. Even the noble warriors Rama and Lakshmana were powerless against this invisible force; they did not know where to direct their arrows. After parrying Indrajita’s deadly weapons Rama called out to Lakshmana telling him to feign death, as this would surely abate Indrajita’s attack, he would return to Ravana with tales of his victory. At nightfall as Indrajita returned to a hero’s welcome at the great palace of Lanka all Rama’s army lay about the field of battle wounded and dying, calling out for aid.

Hanuman still having strength took a mighty leap; the army needed healing herbs from the Himalayas. He broke off a mountain peak and putting it upon his back leapt back to the battlefield. Just the smell of the aromatic herbs began to revive the army and in no time they were back to their former strength.

Nala is the son of Visvakarma (the smith of the gods). He is the architect god and skilled in the arts of building.

Rocks protrude out of the sea dividing India and Sri Lanka. Part of Nala’s causeway has survived to this day!

India – A Place of Learning

The results of coming under the periodic influence of many other conquerors are not all negative. India has a tremendously rich heritage as a font of knowledge based upon the interchange of ideas.

When Europe was entering the ‘dark ages’ after the fall of the Roman Empire, India was embarking on a Golden Age of scientific discovery under the rule of the Gupta Kings. It was a period when both art and science flourished.

Gupta mathematicians invented and developed the decimal system, made up from nine digits and zero. This was later passed on to Europe and the west by the Arabs and enabled Europeans to move forward from the laborious use of Roman numerals.

Indian mathematicians also developed algebra, calculated square roots, worked out the value of Pi and recognised the importance of positive and negative numbers. They theorised and wrote upon the concepts of zero and infinity. The Hindu beliefs in infinite space and constant cycles of creation probably aided in the understanding of these complex mathematical ideas.

Court astronomers had discovered seven of the planets and chartered their paths, although they did not possess telescopes. They knew the earth to be round and not flat, had worked out the cause of eclipses and how to predict their occurrences.

In the 5th century Aryabhata theorised that the earth orbited the sun, while rotating on its axis. In the 7th century Brahmagupta calculated the earth’s circumference reasonably accurately.

Even although these new ideas were completely opposite to many enshrined in some sacred Hindu texts, scientists, although not universally believed, were not persecuted because of their new ideas. Hinduism allows opposite ideas to stand side by side.

Medicine was also well developed under the Gupta kings. Doctors could set broken bones and were able to deliver babies by caesarean section. They even used a form of ‘plastic’ surgery to carry out operations on battle injuries. Drugs were made from herbs, plants and minerals and they recognised the importance of cleanliness, light and fresh air in medical etiquette.

Even before Gupta times, as early as 500 BC, theories had been developed on atoms, molecules, micro-organisms and bacteria.

When the age of the Gupta kings declined, invasions and instability caused a decline in the sciences in India.