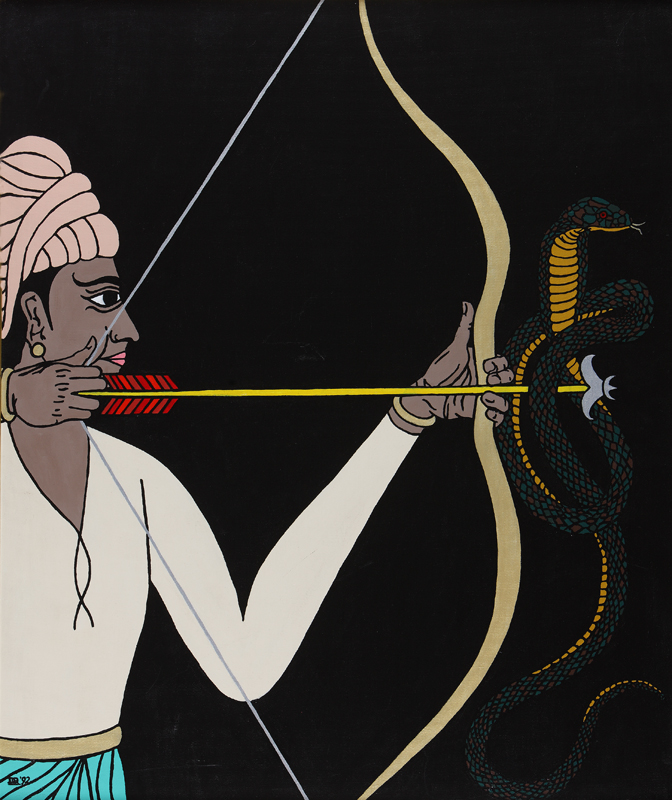 The monkeys rushed at the city and set it to the torch. Meanwhile Lakshmana guided by Vibishana entered the city to prevent Indrajita performing his sacrifice to Agni. They found him and disrupted his offering. Lakshmana challenged him to a duel.

Indrajita rose into the skies in his father’s chariot but no matter what he aimed at Lakshmana, that noble warrior turned aside. Tiring of the fight Lakshmana took up a weapon of the gods and, with a true aim, struck Indrajita dead.

Ravana let out a ghastly scream. Two brothers dead, one deserted to his enemies and now his dear son slain. He got down his armour with his ten golden helmets, called his troops together and led them out for the final battle.

Rama saw his adversary approaching and bade his troops stand back; this was to be his fight alone. He climbed into Lord Indra’s chariot and went to face Ravana.

The battle raged furiously and there was little to choose between the combatants. One moment it appeared Ravana had the upper hand, next the advantage seemed to be with Rama.

Then Rama reached into his quiver and plucked out Lord Brahma’s shaft, put it to his bow, and let it fly.

The arrow, like a winged serpent screaming forth, pierced Ravana’s breast passed through his demon’s heart and returned to Rama’s hand. Ravana was dead.

A great sound of rejoicing erupted from Rama’s army. Their task was done. Sita was restored to Rama and their exile was over.

Rama and his party returned victoriously in a flower chariot pulled by white swans.

Lights blazed from every window in Ayodhya to guide the King back to his rightful throne.

The snake in the picture is the King Cobra (Ophiophagus hannah). It is very poisonous; its bite can even kill an elephant. A person would be dead within 15 to 20 minutes of being bitten.

The King Cobra can grow up to 5.5m (18 foot) long. It is not normally aggressive. To frighten off an enemy it hisses and raises the front of its body, spreading out the skin around its neck until it looks like a hood.

Ravana’s son Indrajita is also known as Meganatha. He earnt the name Indrajita by defeating Indra, the god of heaven, in combat.

Christianity has the Bible. Islam has the Koran, but the Hindu faith has no one religious text. Throughout the centuries Hinduism, the world’s oldest religion, has gathered a great many sacred texts. Probably the most important and also among the oldest are the Vedas: a collection of four volumes of hymns; the Rig Veda, Sama Veda, Yajur Veda and Etharva Veda. There is also a further text called the Brahmanas which forms a commentary on the hymns of the four Vedas.

The Upanishads are made up of teachings on such mystical concepts as ‘World Soul’ (Brahmin) and how the individual soul (atman) reaches oneness with the World Soul to gain release (Moksha) from the cycle of birth and death.

There are the Dharma Sutras, and the later Dharma Shastras, which form the backbone of the ancient laws of Hinduism.

In addition to these books are the epic stories Ramayana and Mahabharata and an important book of stories of gods and goddesses called the Puranas.

All these sacred texts were passed down through the generations by word of mouth for many centuries before finally being written in the Sanskrit language.