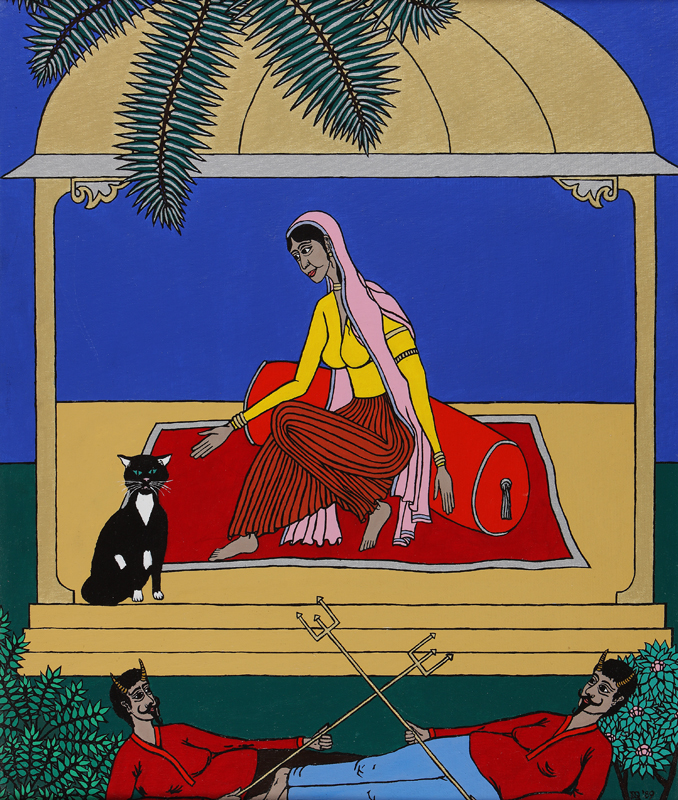 On landing Hanuman changed to a black cat, the better to search from shadow to shadow for the whereabouts of Sita. Having found Ravana’s massive palace he lost no time scouring all the rooms but after a fruitless search he ventured out into the gardens.

Suddenly Hanuman spied a beautiful lady seated beneath a golden pavilion guarded by demons, surely this must be Sita? Hanuman evaded the demons’ gaze and gave Sita Rama’s ring telling her not to fear her rescue was near. Sita was overjoyed and praised the noble creature; she placed a pearl in his hand and implored him to take it, with her love, back to Rama. However the demons smelt an intruder and captured Hanuman, they tied him in strong twine and bound his tail in oil soaked rags and set it alight. Sita prayed to Agni the fire god to protect Hanuman and he felt no pain.

Hanuman changed form and broke his bonds, now was his time to spy out the land and cause mischief. He leapt from building to building setting them alight with his burning tail and causing chaos wherever he went. He spied out all the fortifications of Lanka and, quenching his tail in the ocean, leapt back to the cliff top where he had left Angada.

The Moghul Dynasty and a Very Famous Garden

Today Indian art, architecture and design owe a great deal to Islam and the Muslim rulers who founded the Moghul dynasty of Northern India. The Moguls invaded India from Afghanistan in 1526 to establish their rich and mighty empire.

Babur was the first Moghul Emperor. He was directly descended from two great Moghul warlords: Tamerlane, who and conquered parts of India earlier in the fourteenth century, and Genghis Khan, one of the greatest conquerors of all time.

Babur and successive Emperors lived in magnificent splendour. They built beautiful palaces with wondrous gardens full of flowers, trees, pools and fountains. They employed court painters to paint their portraits. It has been said that the Moguls were the first decorative garden builders. Garden design and construction was viewed as an art form and many authoritative books were written on botanical sciences. Gardens were built on Islamic principles. The palaces would surround a formally laid out courtyard garden. Today’s architects often copy this principle and many schools are built around an inner courtyard just like these ancient Moghul palaces.

Probably the most famous example of Moghul architecture is the Taj Mahal. It was built in Agra on the command of Emperor Shah Jahan as a memorial to his beloved wife, Mumtaz, who died in 1631. It is surely one of the most beautiful and touching tokens of love and devotion.

Hinduism is the world’s oldest documented religion and has grown through the ages, collecting beliefs from many sources.

The Dharma, or sacred laws, that bind all Hindus are very complicated. Different rules apply to different caste groups and at different stages of life. Basically the Holy Scriptures set out a specific moral code for each individual to follow, so each follows his or her own Dharma.