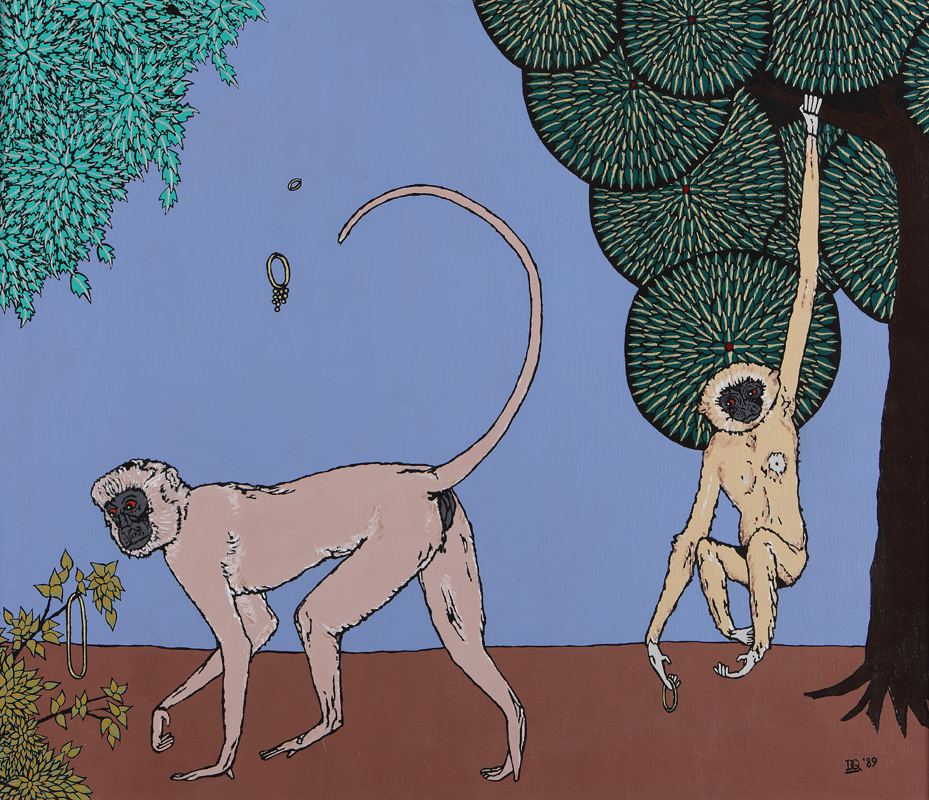 Surgriva And Hanuman Find The Jewels

Sita continued to struggle but Ravana’s grip was too firm. She knew Rama would follow, she had to leave clues for him. She managed to scatter her jewels from the chariot to the ground below hoping Rama would find them in his pursuit.

Down fell the jewels and scattered like rain upon Surgriva, King of the Monkeys and Apes and Lord Hanuman, the Langur monkey. Surgriva was the sun god’s child and Hanuman a son of the wind god, they both possessed great powers and could change their forms at will. Surgriva was miserable, he had been ousted by his brother Bali from his kingdom.

Rama and Lakshmana had begun their search and had found their dying friend Jatayu. Jatayu had just managed to tell Rama all he had seen before he gave up his life. The two brothers headed southwards to free Sita ready to face any hardship that might confront them.

Rama and Lakshmana travelled on mile after mile until they found their way barred by a hideous demon. Rama took up his bow and cast the demon aside with a deadly volley of arrows. In so doing he freed the creature from a curse and it changed into a beauteous being. The being fell to its knees and praised Rama and on hearing of Rama’s plight told him of Surgriva who knew the whereabouts of all demons.

Following the beauteous being’s instructions it was not long before they came upon Surgriva and Hanuman. Rama was overcome with joy when he saw Sita’s jewels, but the monkeys could only tell him the direction Ravana had travelled and not his destination.

Rama and Surgriva made a pact. For Surgriva’s help Rama would win back his kingdom of apes. This done Rama and Lakshmana had the aid of all Surgriva’s battalions and their allies, the bears, in the quest.

Here are two monkeys, or are they apes? There is a difference. Apes do not have tails or bare patches on their bottoms. Apes are also more intelligent than monkeys, but like man they are both primates.

To complicate the matter further, Surgriva, the animal you see hanging from the tree, is neither ape nor monkey but somewhere in between. Surgriva is a gibbon. Gibbons have no tails but do have bare patches on their bottoms. They, like the apes, are intelligent. I chose a gibbon for Surgriva the King of the monkeys and apes because he was neither monkey nor ape but a common link. Of course the king should be a wise ruler, choosing a monkey might be beyond credibility.

Gibbons are found in the jungles of South East Asia where they dwell in trees. Their whooping cry is very loud and can be heard form a long way off. As you can see from the picture gibbons have extremely long arms, twice the length of their bodies. They make good use of these long limbs to perform incredible acrobatic feats. Their fingers act like hooks as they swing from tree to tree.

The other animal in the picture is a monkey called a langur or leaf-eating monkey. This was an apt choice for Hanuman because the type of langur portrayed is a Hanuman Langur, characterised by its pale grey and fawn coloration. In India today the Hanuman Langur is often seen around villages. It is said to be checking that people are still using Rama’s name.

The Langur is one of the largest and most numerous of Old World monkeys. Langurs are found in an area of Asia that stretches from the Himalayas to Borneo.

A Few Words About Hanuman

Hanuman means ‘the one with the broken jaw’. Hanuman was the son of the Wind God, Vayu, the bringer of fragrance and the life giver. When young he saw the sun rise red into the sky and jumped high to catch it. Lord Indra saw him enter his domain and angrily struck him with a thunderbolt. He fell to the ground and broke his jaw. Vayu was so angry that he deprived the universe of his power; all life and movement ceased. The gods, greatly alarmed, offered many favours to Hanuman so his father would re-instate his gifts. Hanuman would never be wounded in battle; no god would use a weapon against him, and he would only die when he chose to.