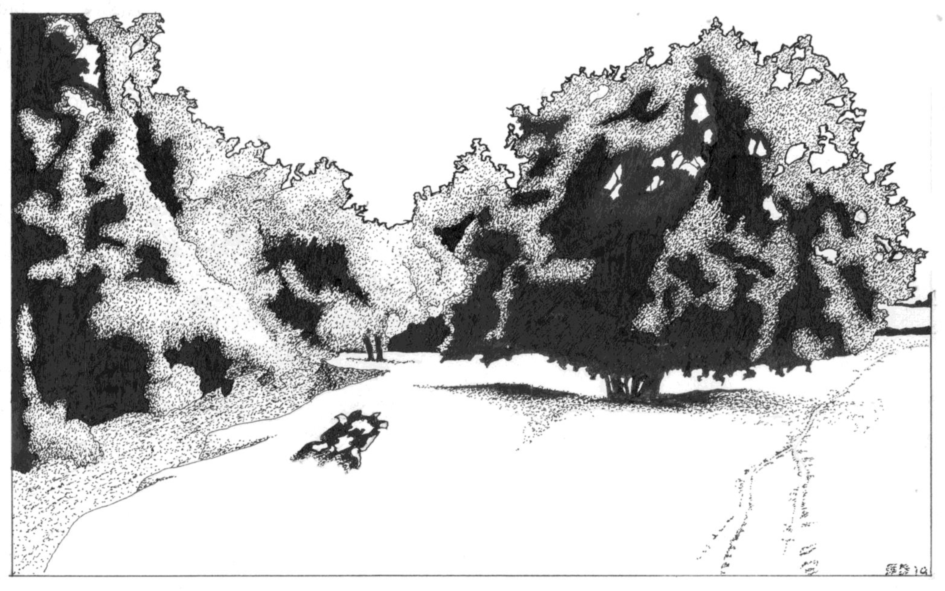 Prince Madog and his brother Iorwerth were at war. Madog sent Rhonabwy, a chieftan, and one hundred men to guard the River Vyrnwy’s ford. There Rhonabwy and his generals asked to stay at the mysterious Pentre Heilyn, the local hall. The owner gave them a spare room. Rhonabwy slept on a calfskin and dreamt that they all flew on a magic carpet to Rhyd-y-groes, the ford near Welshpool. He was chased by a terrifying knight, who was actually kind and took them to meet King Arthur who was camped at the ford. Rhonabwy saw all the armies begin to move beside the river and then woke from his wonderful dream.

No-one attempted a video telling of this story during our project. It is a story from “The Red Book of Hergest” a late 14th century Welsh language manuscript, but the tale probably dates back to the 11th or 12th Century.

The dream sequence is quite complex and difficult to decipher. As a storyteller I had to resort to finger painting on my i-pad to fix the chronology in my head.

When Rhonabwy stopped trying to run away he found out Iddawg was quite friendly. The giant knight led him to King Arthur’s camp where Arthur’s forces were mustering before a battle with the Saxons. Iddawg told Rhonabwy to make sure he looked at Arthur’s ring or he would forget everything he saw.

At this point King Arthur seemed to loose his temper and he stood up and crushed all the playing pieces to dust. Whereupon fighting ceased and peace returned. Then Saxons arrived pleading for a truce, which Arthur granted and invited everyone to follow him to Cornwall.

And this is where the story ends with Rhonabwy and his generals waking up at Pentre Heilyn after three days had elapsed. Rhonabwy (having looked at Arthur’s red ring) was the only one who remembered what had happened at King Arthur’s camp by Rhyd-y-Groes ford on the River Severn.