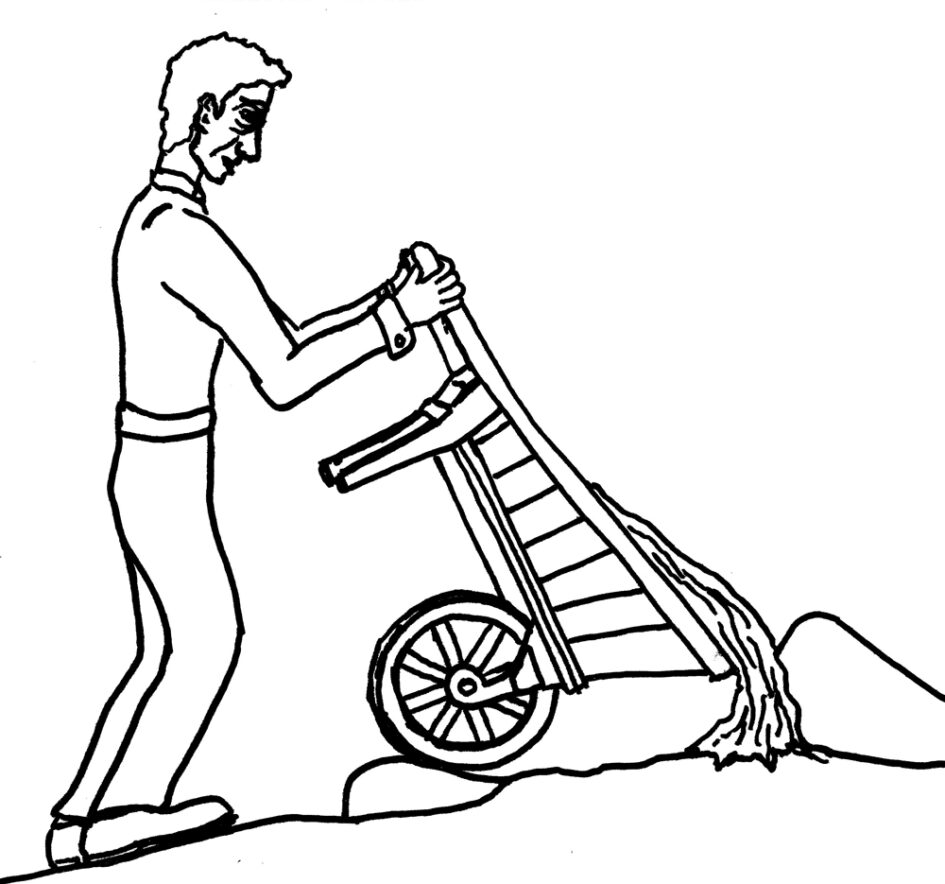 A barrow is bigger than a bucket

A bucket is smaller than a barrow

Which can carry the most mud?

The view from your window

A toposcope shows you a plan of the important places you can see from the top of a hill. It points out their direction and tells you how far away they are.

This is the view from my bedroom window (I get a much better view of far away things from there), I suppose you could call it a “meoscope”.

Can you draw the important places you can see from your window? (Choose the window in your home with the best view) Get an adult to help you to time how long it takes you to walk to each place and write the time in too.

If you want to learn to juggle first you must practise throwing and catching one ball.

Keep on throwing the ball with one hand and catching it with the other.

When you can do this, try to throw the ball level with your eyes.

When you can do this, try to throw the ball in a regular, even rhythm.

When you can do this, try throwing and catching the ball with your eyes shut!

Well done – you will make a good juggler.

Sing Along With Duck
On Titterstone Clee

What can you see?

Look at the rockface.

Can you make out the buried giants’ faces?

How many bricks can you count?

Take care and have a good walk.

Titterstone Clee is in South Shropshire, on the A4117 Ludlow to Kidderminster Road. Cleehill Village on the A4117 makes a good starting point for a walk.

There is free car parking at the top of the village by the viewpoint. The village also has public toilets, a pub, a bakery/café and several other food outlets.

There is no longer a train service, but there is a bus service, go to https://bustimes.org/localities/clee-hill for current timetables.

If you go to Hereford Cathedral you can see the Mappa Mundi and if you look carefully you can find Titterstone Clee right there, a landmark all those years ago. That’s not all you’ll find either, there’s fantastical creatures of all shapes and sizes and most importantly there are giants galore, and each needing a hill to live in.

Yes, that’s right, didn’t you know? All giants need a hill to live under in the cold winter and lay upon on warm summer nights. And if they haven’t got a hill, well they come equipped with a giant spade so they can make their own.

In the bad old days, yes I know some people call them the good old days, but they’ve obviously forgotten about the giants and the trouble they caused: Well, in the bad old days there were so many giants that there was hardly room left for all us little folk. And what room they did allow us was mighty uncomfortable – a life making sure you weren’t in giants’ footsteps was no fun at all, still less waiting to become part of a giant’s lunchbox.

But luckily enough giants are a quarrelsome bunch who seem to spend most of their time arguing and fighting amongst themselves. It was just that way around these parts. The giant of Titterstone Clee was a big, boastful fellow with a red hot temper and a mean, nasty streak. He’d sit in his chair, yes that is it still there to this day up on top of the hill, he’d shout and crow at the giants over on Brown Clee and Abdon Burf,

“Not big enough for a hill of your own, you have to share one, what sort of giants are you, eh!”

Now sticks and stones may break your bones and names can never hurt you, but they can get you mighty mad.

And enough of the wrong sort of words can lead to slings and stones in next to no time, and that’s just what they did. You don’t have to be a student of history to know that one stone thrown leads to another flying back and before long you’ve got a full scale war.

Well, a war nowadays can be a dangerous and noisy affair, but we’re only small fry, can you imagine a battle of giants? The Clee Hills turned from the best to the worst place in all the world. Stones led to rocks and rocks to boulders; and boulders to mighty weapons.

Now, I can see that glitter in your eye, you think this story is just hokum and never happened at all, but, oh yes it did and you can prove it for yourself. Up at the top of Titterstone Clee there’s that chair I told you about before and scattered around are boulders galore – the giants’ missiles for all to see. And up on Abdon Burf you’ll find a mighty 8-foot long slab. It’s called ‘the Giant’s Shaft’ and it’s all that remains of a massive arrow shot from the Titterstone giant’s bow. If you don’t believe me now, you’ll never believe your own eyes.

That battle went on all summer long and the sky was black above the hills. In the end the giants fought themselves to a standstill and dropped in a heap, unable to move a muscle. And that’s when the good people of the Clee Hills saw their chance. They upped with their spades and picks and buried those giants right there where they lay.

The victors climbed into the Giant’s Chair to celebrate their conquest. And so loud were their cheers and so noisy the din of pick hitting spade that they frightened all the giants’ children away. And nevermore has a giant been seen on the Clee’s to this day.

Now the Clee’s were back as the best place to live the people didn’t want to leave anything to chance. So every last Sunday in August, to commemorate the battles, they held a Wake on the hill. They’d sit in the Chair and intone magic words to keep the giants away.

Are we safe today, with no Titterstone Wake and those magic words lost? I think not. So next time you come to Titterstone Clee, sit in the Giant’s Chair and say a little prayer that we might sleep easy in our beds.

PS: Two of the giants’ kids ran off and tried to build a home near Wellington, but they didn’t fare well. But that’s another story on another hill.

When walking the hills: wear suitable footwear, take several layers of clothing and stick to the footpaths. Even in good weather the fog can come down suddenly and it is easy to lose your way. Avoid the Clee Hills in winter and bad weather. The hillside is exposed to bitter winds. But in summer the hills have a magic all their own.

People have always lived on the Clee Hills and worked the hills for coal and stone. The summit was the site of the largest Iron Age hillfort in Shropshire. The most recent influx of people was in the late 1800s when several thousand men and their families worked in the quarries on Brown Clee and Titterstone Clee. Brown Clee was famous for having the highest coalmine in the country. Titterstone Clee is the source of Dhustone. This exceptionally strong stone was used to build the Cardiff docks and to pave the growing network of roads laid out at the end of the nineteenth century. If you look around you can make out the round mounds of medieval bell pits and the broad tracks of abandoned victorian railways and sidings.

There are many stories of the Clee Hills – giants and fairies have lived there. There was also a witch, with the rather unwitchlike name of Maisie Bloomer. The hills are still haunted by a big black dog with red eyes and a diamond collar – don’t worry, he will disappear if you get too close.

And not all stories are old. One of the Cleehill pubs was known as The Kremlin Inn. It was the highest pub in Shropshire before it closed in 2015, and at the height of the Cold War when America and Western Europe lived in fear of the mighty USSR, and ‘reds under the bed’ were thought to be lurking ready to spy on us, it had a temperamental juke-box which would suddenly break from the top ten hits to blare out Radio Moscow, hence the unusual name.

The music on the story page is an adaptation of the old folktune ‘Springfield Mountain’ with new lyrics to suit the story. Traditional Clee Hills’ folk music can be found on YouTube where you’ll find Fred Jordan’s ‘The Farmer’s Boy’ a song that became the theme tune of the Shropshire farmworker (1922-2002). Fred was recorded for the BBC folk song archive in 1952 and his music was made famous in several field recordings available from Topic records. Other favourite songs are ‘We’re All Jolly Fellows That Follow The Plough’ and ‘The Jolly Wagoner’.