Mrs Ellis and her Well 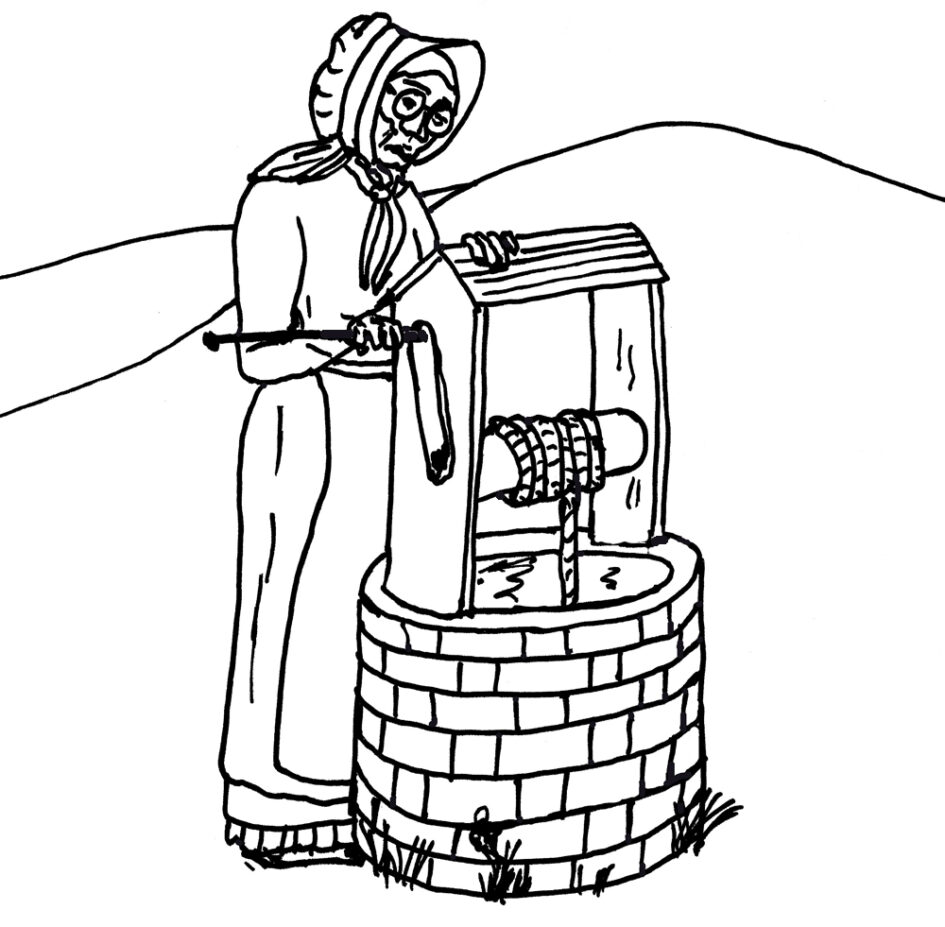 Be A Bird Detective

at Ellesmere we saw a bird, but which of these birds was it?

The bird had black and white feathers. Which bird could it be?

It could be any of them; the heron, the magpie and the flycatcher all have black and white feathers.

Well, that didn’t help us much!

The bird was perched on a branch. Which bird could it be?

It could be the heron or the magpie they are both perched on a branch.

At least we’ve narrowed it down to one of two.

The bird had long yellow legs. Which bird could it be?

Yes it’s the heron, that is the only bird with long yellow legs.

Only one bird has dry feet. Which one is it?

Sing Along With Duck
Cold Water

How many swans can you see?

How many geese can you see?

How many ducks can you see?

Can you count the seagulls?

Ellesmere is a market town in North Shropshire, situated on the A528 from Shrewsbury to Wrexham and the A495 between Oswestry and Whitchurch. The meres are well visited and there is plenty of free car parking in the town and by the lakeside.

There is a bus service, click https://bustimes.org/localities/ellesmere-shrops for further details. The more adventurous visitor can arrive by boat at the wharf on the Shropshire Union Canal.

The town boasts many good pubs and eating places. There are public toilets, picnic sites, a children’s playground, a café and a visitor centre / gift shop at the lakeside. In summer months you will even find an ice cream kiosk.

Right in the far North of Shropshire there’s water a-plenty, throw a stone and just wait for the splash. It wasn’t always so, way back water was an altogether more precious thing.

Mrs Ellis was a lucky woman indeed for in her garden arose a spring. And oh, the water from that spring was the freshest you ever tasted. Her neighbours, who had their own wells or springs, would still drop by and pay Mrs Ellis a visit just for a taste of that wonderful water, and she’d always offer them a sip or two.

Then one bad summer came when not a speck or drizzle of rain fell in those parts. The land was parched and the wells and springs began to run dry. Finally, the only spring left a bubbling and a trickling was that glorious one at the foot of Mrs Ellis’ garden, and all the folks from around and about came gathering at her gate asking for water.

Now its quite an honour and a pleasure when your neighbours come around to pay you compliments, and say how fine your water tastes when its in exchange for a sip or two. But when they come clamouring around your gate, rattling their buckets and wanting to drink you dry, well, that’s certainly a different thing altogether.

You or I might say it is God’s grace that gives us water but Mrs. Ellis said ‘that might be so, but he gave it to me, in my garden, and that is that’. She sent everyone away thirsty, no matter what their need, and said she’d keep all the water for herself. Had she but been thinking clearly, she would have seen there was plenty enough to spare and share.

Well, one thing was certain. There definitely was too much water for her alone. The water kept welling up quicker than she could use it and the little spring was growing a little larger every day. ‘All the more for me’ thought Mrs. Ellis and didn’t give a second thought as she shooed her neighbours off to their homes with their empty buckets clanging around their shoulders.

When the water started to flood her kitchen, she really should have changed her mind and invited all those thirsty people to drink their fill. Mrs. Ellis wasn’t one of those ladies who change her mind with the wind. Her mind stayed made up and she didn’t think twice. She took her valuables up stairs and settled down with a cup of tea, bathing her old feet in a nice, warm footbath.

Yes, you and I would have changed our mind when the spring water came upstairs and into our bedroom. Not Mrs. Ellis, she just went upstairs and into the attic. There she peeped out of the little window at the top of the house, and what did she see? Water, nothing but water. It was too late now, no matter how she shouted there was no one to hear her cries or witness her demise.

Down at the bottom of that deep, deep lake lives a little old lady, Mrs. Ellis. She lives there with her little spring, which filled that mighty mere which took her name, Ellis’s mere, or Ellesmere as we call it today.

Ellesmere is at the heart of Shropshire’s ‘lake district’. The Mere, which borders the town is ably supported by at least five others within easy walking distance. Waymarked walks start from Ellesmere lakeside – for further information click https://www.ellesmere.info/.

The meres came about as a result of the Great Ice Age. They are deep, steep-sided glacial lakes. As one local allegedly told an enquiring tourist “Ellesmere is bottomless, and Colemere’s deeper than that”. The water stays very cold all year round and is not suitable for paddling. Only the hardiest individuals would venture out into the mere.

Every August the town hosts a triathlon where athletes from all over the country run, cycle and even brave the waters of Ellesmere. Boats are sometimes for hire, and there is a traditional lakeside park with a children’s playground and woodland walk. The paths through the park are easily accessible for pushchairs and wheelchairs.

There is an island in the mere which hosts a heronry. If you are lucky enough to visit in the early Spring you can spy on the nests via a video-link in the visitor centre.

As well as herons there is bird-life a-plenty on the mere. You can buy bird food at the visitor centre. There are more than enough ducks, geese and swans willing to participate in a feast.

Away from the lakeside, there are also canal-side walks, a castle mound and, nearby, Colemere Country Park, including a 1 ½ mile circular walk around Colemere. The town has some interesting smaller shops, food and craft outlets and plenty of inviting cafés.

Mrs. Ellis’ story on the website is one of many varients – in others she tries selling her water, or she is a disguised thirsty goddess who begs for water and, receiving none, drowns the town. There are many stories of a mysterious ‘white lady’ of Otley Park, across the lake to the visitor centre, who had a causeway from her home across the lake to the town. Her spirit is said to inhabit a chimney on the estate – the only remnant of the original house. However don’t believe all of this story: while the chimney was deliberately left intact, no one has ever found the causeway and two American airman perished in an attempt to find it while they were stationed nearby in the Second World War.

There are also tales of a water spirit living in the lake called an Asrai. This rare being comes to the surface every hundred years to bathe in the moonlight and mature. Like most lakes in Shropshire, there are many stories of sunken churches and ringing bells. And of course you mustn’t go fishing on the lake on Sunday or Satan will take your soul.

We should not forget another old lady who lives in the lake, Jenny Greenteeth. She is a hideous hag with pondweed as hair who lives in the reeds and grabs little children and tries to pull them into the water. So don’t go too close to the edge.