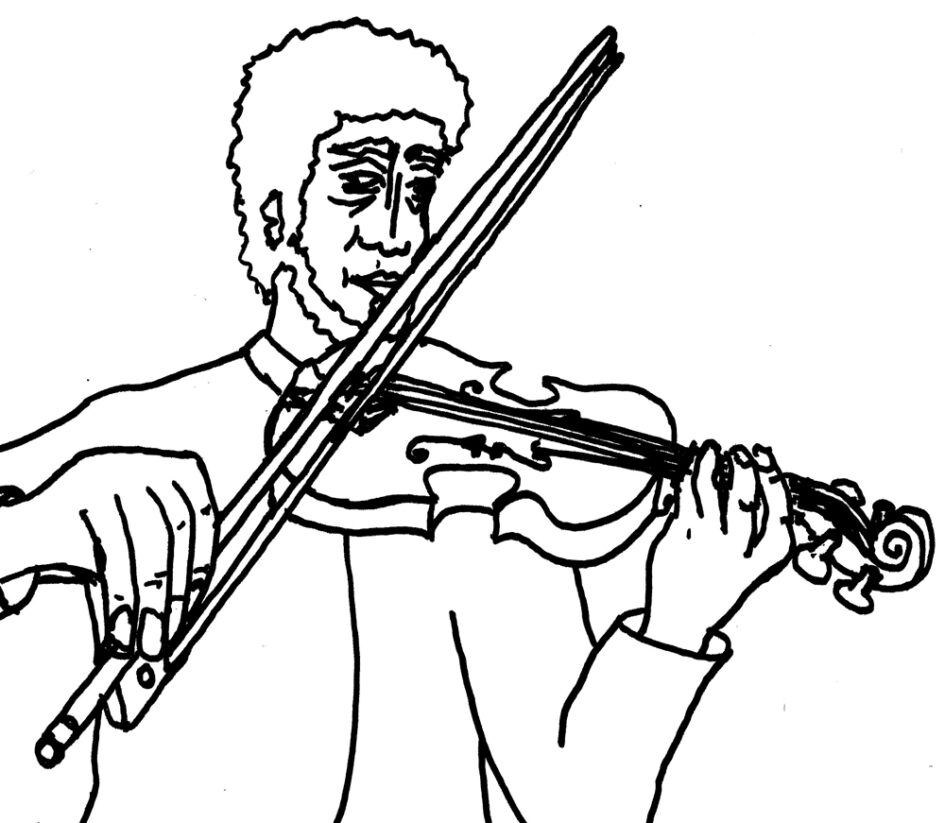 Which animal went through the gate?

Ali has climbed over a stile. She has opened the special gate next to the stile for her pet. Which animal is Ali’s pet?

A dog; that is a dog gate next to the stile.

Can you see the moth?

Can you see the dragonfly?

This is a ’round’ for 2 or more voices. One person starts singing and when they reach the end of the second line the next voice starts at line one.

Look up at the chimney.

Go into the lime kiln – take an adult with you.

How many other entrances can you see?

Can you hear Ned Pugh’s violin?

Llanymynech (pronounced Clan-u-mun-ek) is a village on the A483 south of Oswestry. There are two main sites of interest: the Llanymynech Limeworks Heritage Area which is clearly signposted adjacent to the main road in the middle of the village, and Llanymynech Rock Nature Reserve, entrance further along the A483 to the north in the neighbouring village of Pant. There is free car parking in the village and at the entrance to both sites.

There are regular bus services click https://bustimes.org/localities/llanymynech for details.

There are several pubs/hotels in Llanymynech which serve non-residents and the market town of Oswestry is only 5 miles away.

Now if you were as old as me you’d know not to go a trifling with fairy folk, they’re little tricksters they are. My Gran she drummed it into me while I sat on her knee,

“Don’t go eating fairy fare or drinking their ale.”
“Always keep an old horse shoe nail in your pocket to keep you safe. The wee folk can’t abide iron, it’ll shoo them away.”

Well you and I can see what we’re doing, but the same wasn’t true of Blind Ned Pugh and it got him into a real fix.

Ned was up there on Llanymynech Hill fiddling an air into the wind when someone came a-shouting at him late one night. In a fever pitch of agitation, the fellow hardly seemed to make sense. When Ned cooled him down with a kind word or two it seemed he wanted a fiddler, and Ned was the chosen man. Their regular man had let them down and there was a party waiting for the music to flow. He was sure there would be outbreaks of violence if Ned didn’t agree to come, and to be true Ned never did need too much encouragement to play so he followed along, ready to be the hero of the hour.

Now Ned may be should have noticed the man’s high pitched voice or the fact that it seemed to be coming from somewhere around the height of his knees. He may be should have noticed the balmy moonlit air turn heavy, dark and damp, but he was just thinking of the list of tunes he would play. Ned had he but known it was walking down into that cave right up there on the hill, the Ogof, and he was following a little old fairy with a twinkle in his tiny green eye.

The gig was a good one and Ned could hear the dancing was furious, energetic and long. His bowing arm was aching, his fingers wearing into grooves. He’d lost all track of time after the sixth waltz in three beats to the bar. He was also mighty hungry with a thirst that needed quenching mighty fast when, as if by magic, he found right where he needed it just what he wanted.

There was a glass of good strong heather ale and some cakes on the stool where he rested his feet. He slurped and he chomped until he was fair fit to bust. He didn’t even notice they were fairy cakes until he got up to go.

“There’s no way out for you my man now you’ve sampled our fare”, squeaked an old scratchy voice again from his knees. “You’ll be living with us fairies now and playing some more of those jigs. We like a little dancing and a song here and there”.

Well, Ned at last had found one audience who just couldn’t get enough and truth to tell he was mighty happy to stay down below and play. He insisted on regular meal breaks, mind, and three pints of heather ale a day. He’s still happy playing there right to this day. Fiddling a jig, picking a polka or scratching out a reel. He’ll never grow old because age there stands still, so you may well hear him under the hill. Down in the cellars of the Llanymynech pubs you’ll hear notes on the air and in the church of a Sunday while the choir’s singing you may hear a different tune.

but I’ll not go to join him, I’ll remember my old Gran and keep hold of my horseshoe nail. There are certain musical concerts around here where the entrance price is too expensive to pay.

Like most wooded areas, both sites are best visited in dry weather.

Your first view of the Heritage site is of a well organized fenced-in builder’s yard. Llanymynech Wharf Visitor Centre is next to the canal but it is only open on Sundays and Bank Holidays from Easter to September. Don’t be put off. The Heritage area is behind this compound. Take a few minutes to read the information board on your left. It puts the site in context. Then go off and explore.

The area is level and is served by rough paths so it is possible to take a pushchair. A round trip to the massive lime kiln and chimney with an interested young child should take about an hour.

Llanymynech Rock from below Llanymynech Rock Nature Reserve is accessed from a narrow track off the main road. The way marked paths at the entrance are confusing – follow your instinct (or an OS map) and you will soon be rewarded by reaching the more level ground at the foot of the rocks. The woods hide a profusion of wildlife; flowers, insects, birds and abandoned industrial equipment. You and your child could happily spend an hour exploring without straying more than a metre from the paths. We recommend that families stay in this section of the reserve.

Those used to hill walking might want to climb up the cliff and seek out the Ogof (the entrance to fairyland, and also a Roman Silver Mine). The path is easily identified, but it is narrow and steep. Please take care, the Rock is dangerous. On the cliff-top you will find a golf course. The Ogof is in the centre, between two fairways. There is a public right of way to it, which mainly runs alongside the greens. Take an OS map, check your position frequently and watch out for flying golf balls. It is a long and arduous walk, be prepared to carry young children. We had a really enjoyable afternoon exploring this higher section, returning via the roadway from the golf course.

Its not only fairies that live on Llanymynech hill, it is also giants. One giant buried his much-beloved wife on the Southern slopes of the hill, still wearing a solid gold torque (necklace). He marked the spot with a monument made from stones. Late in the 19th century three brothers, farmer’s sons, found the lure of the gold necklace too much for them and tried to unearth the treasure, overturning the capstone of the monument. Alas they never found the treasure and they met mysterious and sudden deaths soon thereafter.