Skunk has found a new home 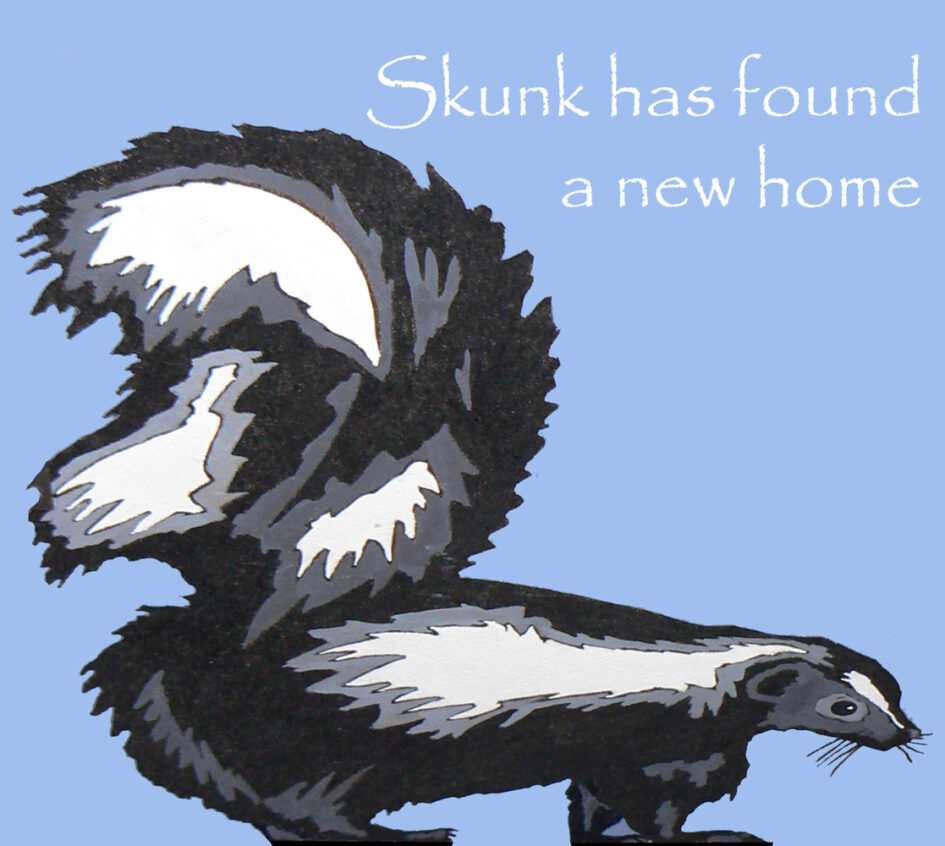 Tuesday morning was baking day for Tante Odette. Regular as clockwork (weather permitting, of course), Tante Odette would be out firing up her old oven in the yard and carefully sliding the dough onto the hot bricks with her wooden paddle.

But this Tuesday wasn’t just exactly like any other Tuesday. When she went to clean out the empty oven prior to setting the fire, Tante Odette found the oven wasn’t as empty as she’d expected. Two little blue eyes met hers as she opened the door wide, and her mouth opened wide too, just like that open door.

No, it wasn’t Chouchou her old grey cat, you’re wrong there. It was about the same size, but an altogether different colour and with two white stripes down its back. Yes, now you have it, a skunk it was and we all know about skunks and their smelly habits, don’t we?

Well, Tante Odette was more than familiar with what harm a skunk could do if it let loose and sprayed its evil-smelling fluid in your direction, and she wasn’t best pleased that the little creature had decided to come visit her oven.

Now, what to do? Tante Odette couldn’t come up with one idea for moving that skunk if he, as it looked, was in no mood to move himself.

Tante Odette as a rule didn’t have much time for her neighbours. But needs must so she hung up her apron, buttoned up her coat and set off at a dignified run to see who she could enlist to help her.

About an hour later she returned, dragging her feet, out of breath and out of sorts. Everyone had said they’d, “be along in time”, but wise ideas didn’t seem to be at a premium today. Silly solutions come cheap, she thought. She’d variously been advised to, “shoot it”, (think of the state the oven would be in); “poke it with a stick”, (well, would you risk the consequences of that); “bribe it out with a tender morsel of meat”, (Tante Odette wasn’t the kind of woman to waste food, meat wasn’t something you saw in her kitchen too often anyway). Someone had even suggested she, “cook it for dinner”, (the very thought!).

Now, on her return, to make matters worse, the whole village seemed to have turned out to laugh at her misfortune. It’s a catastrophe when you have a skunk in your oven, but a fine entertainment to have a skunk in someone else’s oven.

This was all too much… and now the village fool, René, was tugging at her skirt in that irritating way he had, asking her what went on. Tante Odette was just about to send him away with a clip to his ear when she decided what was there to loose? When all the wise villagers could come up with nothing but the ideas of fools, why not ask a fool to see if he can be wise on the turn-around-Tuesday?

René had that blank stare cast on his face again, but after a second or two it was replaced with a half-smile.

René walked over to the oven and put his head inside to whisper into that skunk’s ear. After just a sentence or two, René stepped back, allowing the skunk to slowly emerge and walk across the yard, bushy tail held high. With what looked like a sneer in his eye the skunk slipped under the fence and off into the woods, leaving one very relieved elderly lady to find her composure before baking her bread.

And what were René’s magic words that sent the skunk away? Well, simply he appealed to the skunk’s self respect. He pointed out that if the skunk stayed in that oven too long, he’d come to smell of Tante Odette’s bread, and be shunned by every skunk worth their stench in the East of Canada.