Bharata and the Fawn 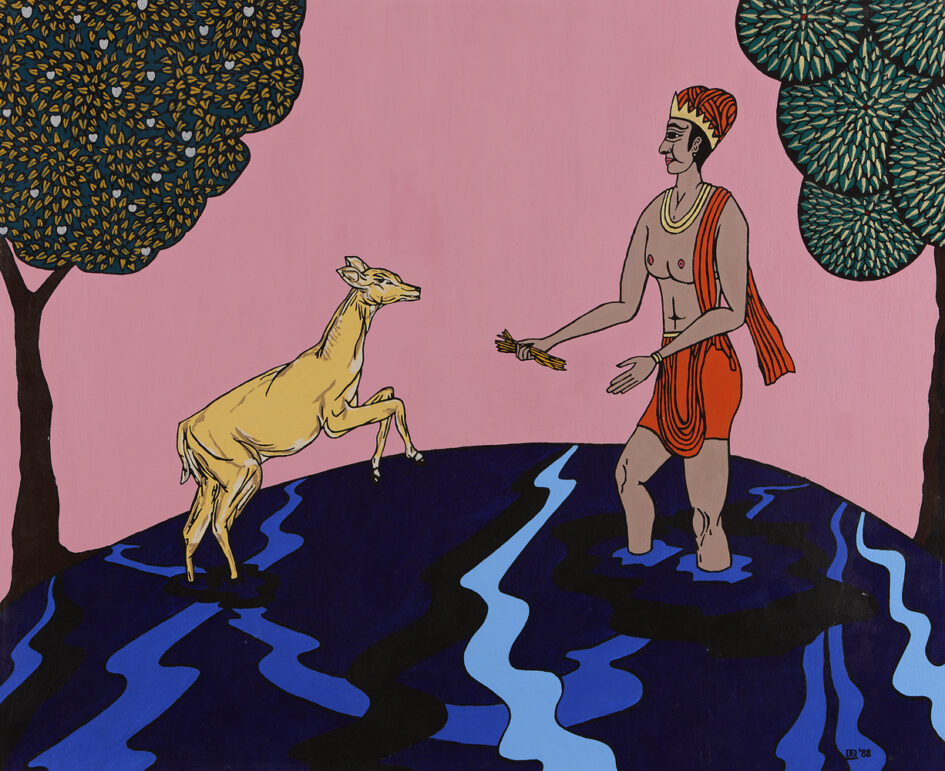 King Bharata was a wise and noble king, he had ruled over all the world for many years. He was also a devout religious man who paid tribute to Lord Vishnu.

It was time, he thought, to give up his kingdom and devote the rest of his life to prayer and meditation. He divided his kingdom amongst his five sons and retired deep into the forest to build his hermitage by a river.

He made offerings, prayed and meditated and grew closer to his Lord in the tranquility of his existence.

Bharata was bathing in the river one day when he heard a lion’s roar close by in the forest. A deer ran into the river fleeing from the savage beast. When the terrified animal reached the far side of the river it fell and lay dying. As the deer died it gave birth to a helpless fawn which lay by its mother struggling for life in the shallow waters by the river bank. Bharata heart was moved, he took pity on the animal and took it to his hermitage and looked after it.

Bharata cared tenderly for the fawn and as time went by their attachment to each other grew and grew. Bharata became so fond of the fawn that he began to neglect his religious duties, and soon the fawn became his whole life.

The fawn grew to adulthood and soon disappeared into the forest. Bharata was devastated. His bond with the animal had become so great that all he could do was mourn his loss. Now Bharata’s life was ruled by sorrow and still he neglected his religious duties.

Some time later the deer returned to Bharata. He was overjoyed and welcomed the deer’s return like that of a lost son. He devoted the rest of his life to the animal.

On his death-bed Bharata’s thoughts were only about his deer, and so, when his soul left his body, Bharata was reborn as a deer.

Bharata’s memory of his previous life stayed with him and he began to regret neglecting his religious duties to his Lord Vishnu. He left his herd and went back to the empty hermitage to remain alone and graze by the banks of the river. His desire to leave his bodily form was so great that he died and was reborn as a human child to a family of wise, priestly Brahmin.

Bharata remembered his past lives and kept himself apart from all others. His desire for solitude was so great that people thought he was half-witted. When his parents died his brothers treated him as a slave and everyone made fun of him. He did not care, he accepted everything that happened to him with grace.

The King of Bharata’s country was to make a sacrifice to the Goddess Kali. The King’s servants told him about half-witted, useless Bharata and he decided that Bharata would be a human sacrifice.

The King was to perform this sacrifice himself, he raised his sword and was about to cut of Bharata’s head when Kali recognised Bharata. She was afraid to receive the devoted follower of Lord Vishnu as a sacrifice and grew angry with the King. Kali’s anger was so great that the King and his servants fell dead in its wake.

Kali turned to Bharata and assured him that the Gods would protect him always. Kali vanished and Bharata returned to his hermitage to concentrate only on his religious devotions.

Notes on the story…

Why did Bharata give up his kingdom?

Hinduism sets out a blueprint for life made up from four stages (called Ashramas) for believers to experience. The stages are Brahmacharin or student, Grisastra or householder, Vanaprastha or hermit and Sannyasi or wandering holy man. Some Hindus pass through all four stages but most spend their lives as householders. Elderly people sometimes adopt the life of a hermit spending the rest of their lives devoted to prayer, this was Bharata’s choice.

At the centre of the Hindu religion is a belief in re-incarnation. The human body grows old and dies but the spirit within lives on and is reborn in another form, either human or any other living thing. The conduct of your life determines the form in which you are reborn.

The only way to break this cycle of birth and death is to attain ‘moksha’, a high peak of spiritual awareness achieved by devoting your life to prayer, meditation or selflessly serving your fellow men.

The Hindu faith has many gods, but is centred around a trinity – Brahma, Vishnu and Shiva. Most Hindus today devote themselves to one of three sects:- Shiva is the main God in one, Vishnu is the main God in the second, while the third sect’s main deity is Devi (the Goddess). She appears in many different guises representing all the different facets of human nature. Kali enshrines the dark side of life (disease, war, etc.).

Human sacrifices to Kali ceases many years ago, but animal sacrifices are still performed at some Kali shrines to satisfy the Goddesses taste for blood. She acquired this appetite when she killed a demon whose blood, had it touched the ground would have caused a thousand demons to spring up. On killing the demon she drank all its blood before any could reach the earth.