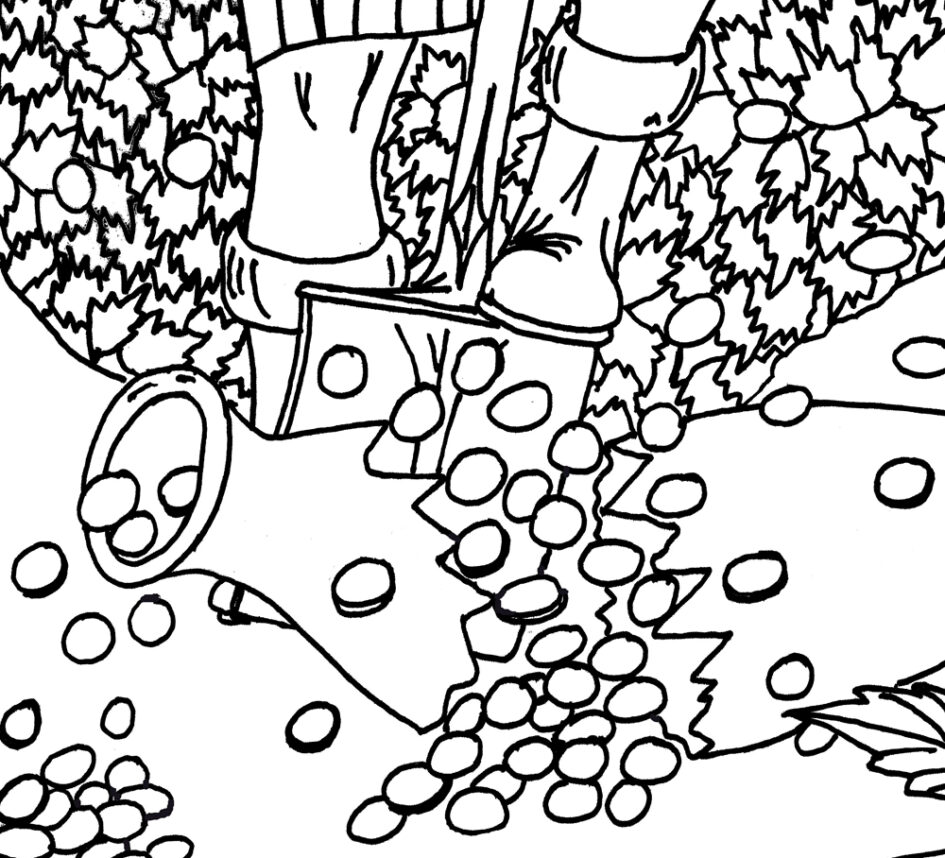 Old Mother Fox has woken up. What time is it?

Old Mother Fox has woken up again. What time is it now?

Old Mother Fox has woken up again. What time is it now?

Maybe it’s time she got up out of bed!

Roman shops were very different to supermarkets. Each shop sold only one type of thing – meat or fish or cloth or fruit.

The shops at Wroxeter were about 4 metres square. They had 3 walls with shelves of items for sale.

There was no front wall – only a counter.The shop-keeper stood behind his counter. The custumers queued up outside the shop and waited to choose what they wanted to buy.

Make your own model Roman Fruit Shop from a cardboard box. Get an adult to help you cut off the top and one of the sides. Paint pictures of fruit on the inside of the 3 sides, or stick on pictures. Find a smaller box to be the counter, or make one by bending the cut-off card into shape.

Your toys can queue to be served. What things do they talk about while they are waiting? How do they ask the shop-keeper for the fruit they want to buy?

Sing Along With Duck
I’m A Lousy Miner

This is the exercise yard.

Can you find it and do your exercises?

You can see the “Old Work” from anywhere on the site.

But it doesn’t look the same from all directions, can you find where these photos were taken.

Here is the museum.

Can you find any Roman coins there?

Wroxeter Roman city is 5 miles east from Shrewsbury on the B4380. There is car parking on site. You can also reach it by bus click https://bustimes.org/localities/wroxeter for details. The nearest train stations are at Shrewsbury or Wellington Telford West (6 miles).

There are toilets on site and a gift shop and a small interpretive museum. There are seats overlooking the ruins where you could picnic, but you might prefer to travel back towards Shrewsbury and stop off at the rather grand riverside hotel in Atcham, “The Mytton & Mermaid” for a drink or a meal, or visit the café at the nearby National Trust property of Attingham Park also at Atcham. Further afield Shrewsbury and Ironbridge (8 miles) are also well-served with cafés, riverside walks and museums.

You hear the racket coming from the wheelwright’s shop? He must be hard at work, you’d think. I know better. That’s not him hammering at spokes and making a metal tyre ready on his anvil, that’s the sound of the cogs and gears in his wife’s head whirring and clicking as she dreams and schemes of a thousand new ways of finding a fortune.

We all have dreams but Betty ‘Mother’ Fox never stopped. Her eyes ever had a far-away look, you’d see her around the village racing this way and that always in search of a dream.

Now, my old teacher said ‘Perseverance counts’. I don’t know that it ever did for me, but to my surprise it did for Old Mother Fox and this is her story.

It was one night last back end and she sat bolt upright in her bed and poked her old man in the ribs.

Well, what a way to wake a man when he’s been working hard all of the day trying to earn you a crust. His tired bloodshot eyes blinked and then stared, but he knew better than to make too much of a fuss, Betty wears the trousers in that house.

“What do you want, woman?” he grumbled.

“I seen it in my dreams, man. A crock of gold, full to the brim, I seen it and I know where. Get your spade”.

Trousers or no trousers, there is only so much a man can take and he wanted to get back to sleep.

“Hush, woman, it was nought but a dream, now go off to sleep”.

Well, I suppose that would’ve been that, but it wasn’t. For in less than an hour there she was prodding at him with her boney finger again.

“Get up, man, I seen it agin. Its buried in the verge by that old elder bush by the Uckington Road”.

Woken twice, a working man with a full list of jobs for the morning doesn’t think of the consequences of denying his wife her every whim. He thinks only of getting back to sleep.

“I needs me sleep. Now quiet woman, and away with your dream”.

Story over? No, far from that. At 3.00 am there she was, after the same dream came again, but not waking her poor husband this time. She was pulling on her clothes and on her way to the workshop for the spade.

Pausing only to tie her apron, because, no matter what, she wouldn’t be seen out without that, she bustled off down the lane with her skirts hitched high.

It didn’t take a minute or more before she was flinging away the turf and soil from that spot next to the elder. And her enthusiasm took her down a foot before you could’ve blinked an eye. Then with a dull crack her spade hit something hard. She threw the spade aside and, down on her knees, pulled away at a pottery shard and into her hands tumbled 400 gold coins.

Old Mother Fox is the richest lady in Wroxeter without doubt, but that hasn’t stopped that old mind ticking and clicking to see how she can find more.

Just like that lottery, you win two pounds so you buy two tickets to see if you can win four.

Wroxeter was the fourth largest city of Roman Britain. Today most of it lies buried under the Shropshire landscape with only the remains of the municipal baths, part of the courtyard shops and street on view. Wroxeter Roman City is owned by English Heritage.

There is more information about the Roman City and an interesting story about how the city was destroyed elsewhere on the main Mythstories website-click here.

The song – ‘Lousy Miner’ – is an American Folk Tune but it amply illustrates how someone can waste away their life always looking for gold.

The road that runs alongside the site down to Wroxeter village is part of the old Watling Street. Follow the road in the other direction, towards Uckington, and you will pass the spot where the treasure was found – in the hedge, next to an elder bush.

No one knows whether the story is really based on truth, but it is definitely true to say that hoards of Roman coins have been discovered in and around the ruins of Wroxeter Roman City, so we prefer to call this a legend rather than pure fiction.

The pot in which the gold hoard was found, shown in the illustration, is an amphora – a large two-handled jar used for transporting oil and wine. Wine is now made nearby at Wroxeter Roman Vineyards, just through the village.