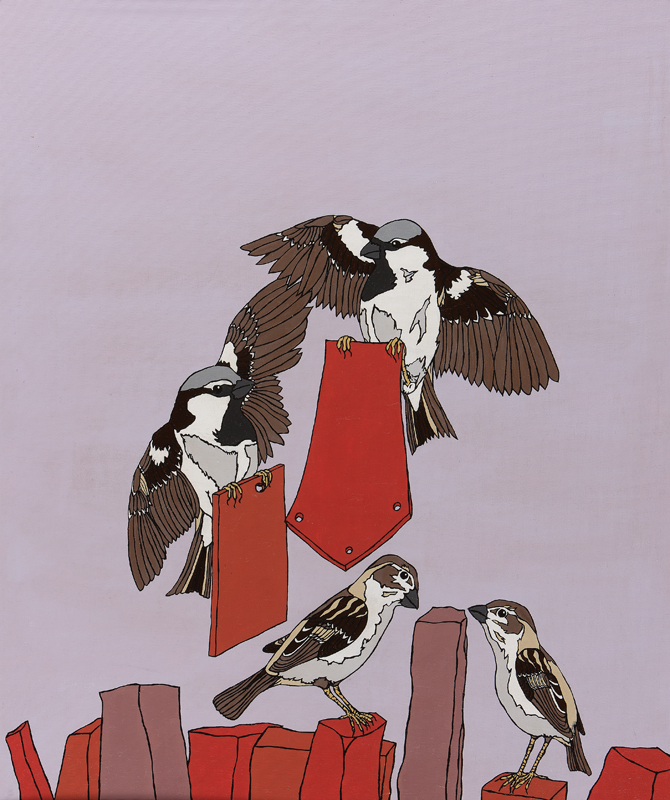 Even we, who live close to the old city, can’t tell you why it happened.

It’s said that Arthur’s Camelot was built there when the Romans left, but I can’t tell you that for sure. All I know is that before the year 600 came the city was empty. Not one grand person stayed to be its guardian.

The city was left whole, and people may say we stole the stone, bricks and slate, but we know better. You ask anyone around these parts if they took so much as a speck. I’ll tell you their answer – “No”, they’ll say.

For what we can tell you is the sparrows took it. Great flocks of the birds came. They roosted all around, and more and more came.

Early evening brought clouds of them onto the roofs of the old city. They were pecking at the tiles, stabbing away at the mortar, you’d never believe it. By morning all that was left was that bit of old work you can see today.

We know it was them sparrows, we seen it with our own eyes.

Wroxeter is the site of what used to be the fourth largest Roman town in Britain, Viroconium. The town was founded between 58AD and 75AD on the site of a legionary fortress, whose garrison eventually marched north to Chester. The town quite quickly grew into a large and bustling city.

The largest standing wall left remaining is called the “Old Work”. The Old Work was part of a covered exercise hall for bathers. The masonry has survived centuries of weathering and medieval pillaging. At ground level the remains of most of the bath complex can still be seen nearby.

From the 2nd century AD there was a gradual decline. The main baths ceased to be used around AD300, when smaller subsidiary ones would have been used instead. Gradually the city fell apart until, around AD400, there is some evidence of rebuilding works taking place. In the 5th century AD the Roman administration withdrew from Britain. British peoples probably stayed on in the city for some time. It is not known when the city was finally deserted, there is no evidence of a fire or other disaster. Sandstone blocks from the Roman foundations have been found in the earliest parts of nearby Wroxeter, Atcham and Upton Magna churches, so around the late 9th century the city seems to be just a resource for building materials. The Old work was probably incorporated into a field barn and so survived.

What remains today is only a very small area of the city complex. In its heyday the walls enclosing the city would have been 2 miles (3.7km) long.

There is another story about the Sparrows at Wroxeter which is also told of other Roman cities.

Barbarians tried, unsuccessfully, to beseige the city until they had a bright idea. They set nets and caught all the local sparrows. They tied lighted spills to the poor birds’ tails and set them loose. The sparrows landed on the city, setting the buildings alight. While the defenders tried to put out the fires, the invaders took the city over.

The tiles the sparrows are so adeptly carrying away are based on those the Romans would have used. They are thick and made of heavy red clay, all the more miraculous that sparrows can steal them!

They Couldn’t Do Without It

The Romans are famous for introducing the dormouse to Britain, which they brought over to eat. Dormice were a great delicacy. They were fattened up on grain, then killed and cooked soaked in honey.

The Romans introduced a great many other things too. There was the grape, of course. The Romans couldn’t do without their wine, even though they used to import it too. Other plants they brought to supplement the meagre British diet were cherry, walnut, mulberry and medlar trees. (medlars have small crab-apple like fruits, which surprisingly cannot be eaten until they have begun to decay). Ground Elder was brought as a pot herb, but someone must have broken the pot that kept it contained! Nowadays it is the bane of many a gardener’s life as it infests lawns and is very difficult to get rid of.

Vegetables that the Romans could not do without were Peas, Broad Beans, Radishes and Celery. They also introduced the Opium Poppy and Deadly Nightshade (Belladona) for medicinal uses. I wouldn’t try either if I were you though, Deadly Nightshade is more likely to kill than to cure.

Other plants came with the Romans too, but not necessarily because they wanted them. The seeds might well have come on soldiers’ clothing or in their packs. They could also have come as seedlings together with the plants introduced on purpose. These introductions included Great burdock, Corn Marigold, Tufted Vetch and Common mallow, all of which we take for granted as part of the British countryside.

If you were off to a foreign land, what would you like to take with you – customs officers permitting?

Do You Speak Latin?

The Roman’s language was called Latin. There are Latin Roots still visible in our language today.

Below is a list of Latin job titles with a similar sounding english word as a clue in brackets.

Guess what the job title’s english translation must be. The solutions to these and the other puzzles on this post are to be found by clicking + at Answers to Activities at the foot of this post.

Time To Pick Up Your Wages…

In Roman times some people were paid in salt instead of money. The latin for salt is Sal, can you guess which english word for wages is derived from this peculiar Latin custom?

Our word manufacture comes from two latin words, manus meaning hand and facere meaning to make. So you can see it literally means made by hand.

Some other english words come from these two latin words. See if you can guess these three below from the clues?

an instruction book
done by hand
things are made here

This is an excerpt from ‘On The Trail of King Arthur in Shropshire’ – a leaflet published by Shropshire County Council.

Viroconium at Wroxeter was the fourth largest city in Roman Britain. Archaeological excavations reveal that shortly after the departure of the Romans, and while civilisation was collapsing elsewhere in Britain, Viroconium was rebuilt in a highly sophisticated fashion. On the site of the Roman baths complex, elaborate classical buildings surrounded a massive winged mansion. This remarkable fifth-century city may well have been the capital of Arthurian Britain, the classical mansion possibly the seat of King Arthur himself.

Lots of other places around the country claim to be the home of Arthurian legend. Are you convinced that Arthur lived in Shropshire? Why do so many places claim to be Arthur’s home?

Viroconium was a massive Roman City built on a typical square grid pattern of interlocking streets centred around the forum and the baths. What is the street plan of the place where you live? If you could design the perfect city, how would you arrange the roads?

All the birds in this painting are House Sparrows, but the two carrying the roof tiles look different from the two perched on the wall. Guess which are male and which female, now check your answer.

Bird watching can be fun. Here are instructions on how to make your own Bird Table and watch out for the visitors. Make drawings of the birds that come to feed.

How Do I Make It?

It’s easy to make a bird table. Take a good stout fence post, hammer it well into the ground (make sure it’s tall enough so cats can’t jump up). Then nail or screw a strong, square board to the top of the post.

In the picture I’ve fixed some lengths of roofing lath around the edges of the table top. These should stop the birds’ food from blowing away in the wind. Leave gaps at the corners so it’s easier to brush clean, and so rainwater can drain away.

If you treat all the timber with an environmentally friendly wood preservative you’ll give the table extra years of life.

If you have a problem with cats who decide to climb when they can’t jump onto the table, nail some chicken wire around the edges of the table to discourage them.

What Do I Feed Them?

You can buy bird food such as nuts, seeds, fat balls or bird cake at most pet shops or hardware stores. Also give the birds oats, raisins, wholemeal breadcrumbs, seed heads like dead sunflowers or apple cores. See which birds prefer each different food.

Keep the table away from bushes and other places where cats can lurk. Make sure there is a tree nearby so birds can see if it’s safe to come to feed. Most importantly put the table in a good position so you can watch the birds from your window. If you haven’t got a suitable position for a table, hang strings of peanuts, coconut halves or feeders from a tree.

When Do I Feed Them?

All year, birds are getting rarer because there’s less natural food.

Put Some Food On The Ground Too!

Do remember that some birds are ground feeders and won’t eat off a bird table. Scatter enough food for a day on the ground (if you put too much down you’ll encourage vermin). Keep the table and surrounds clean, tidy up each evening.

A song and a vert tall story just like The Disappearing City. Look at the lyric of The Derby Ram and listen to the music file. See if you can sing along.

The House Sparrows carrying the roof tiles are males, the two perched on the wall are females.