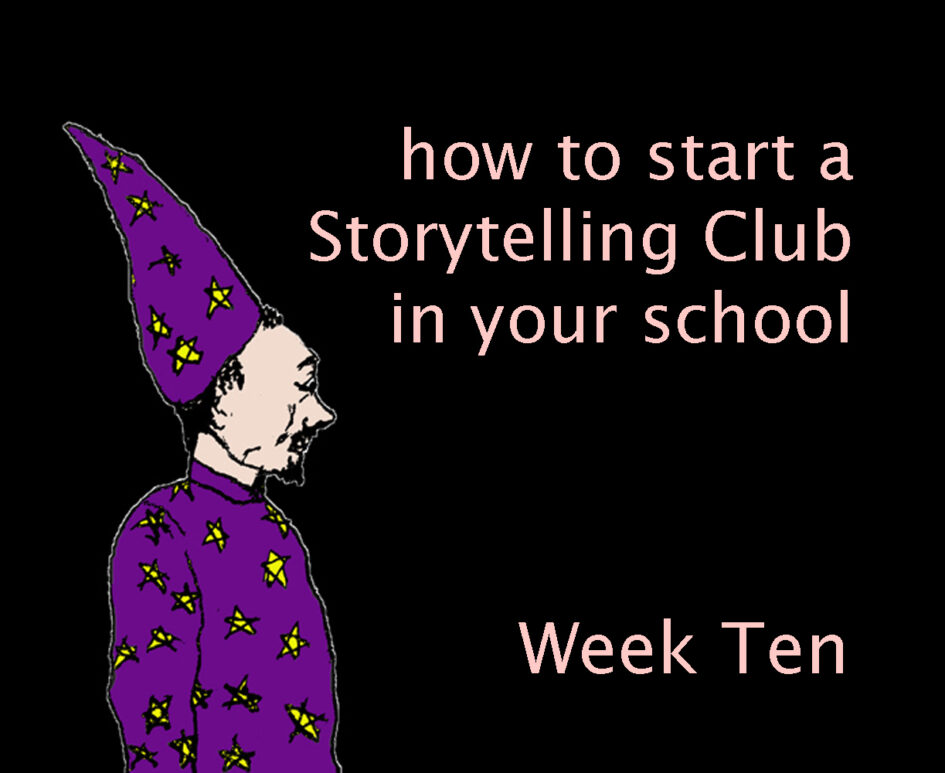 Telling a story is more than just standing up on a stage, speaking and letting the audience listen (or not). It is a genuine two-way communication, where the audience response helps shape the tale.

If the audience seem less than enthusiastic in a particular aspect, the storyteller should minimise that section of the tale, communicating only the bits that are important for the understanding of the story as a whole. And the storyteller knows to omit similar parts later in the tale, if at all possible.

But how do you judge audience engagement? When one-to-one telling or telling to small groups you can rely on your instinct in just the way that you do when having a conversation.

Everyone in the group will need something to tell for about 2 minutes. So give the group ten minutes to work out what they want to tell. This could be a short story, or a segment of a story they know well.

Work in small groups of 3 or 4, each group choses who will be the teller.

All the tellers leave the room, and the rest of each group decides whether they will be ‘interested’ or ‘disinterested’ in their teller’s story.

At this point remind the listeners that they must not overplay their roles, the object of the exercise is for the teller to learn to read the subtle differences in the signals an audience puts out.

The tellers return to their groups and start telling, while their groups respond in accordance with their selected role.

Repeat, until everyone has experienced telling their tale to small groups of interested and disinterested people.

Tip: Vary the membership of the small groups often, so they don’t develop ‘pack mentality’ and get unrealistically negative when asked to portray this role – those telling earlier on in the exercise remember who treated them harshly and may over-react in their turn.

Now call the whole group together and get their feedback on how they worked out whether or not their listeners were interested in what they had to say.

Their responses should include:

noticing the way the audience is standing,
whether or not they are looking at you,
inclining their heads towards you,
nodding in agreement,
making encouraging noises or comments,
asking ‘what happened next?’ etc.

These same methods also apply to working with larger audiences.

All storytellers will directly engage with their audience to a certain extent. Where they draw the line is a very individual decision and may vary on the mood of the storyteller, how they read the audience and the type of story they are telling.

Four common ways of direct engagement are given below:

In small groups, experiment and see who enjoys this approach. Alternatively get each teller to try it out when performing in front of a supportive audience.

Use repeat phrases
These will already have been identified and incorporated into the story. But do encourage the audience to join in. Most people see being an audience member as being a passive role. Storytelling is different in this respect and new audiences might need an introduction to this etiquette.

Many of these phrases are joining the separate scenes of a story; for example ‘she walked for one, for two, for three days and then…’ and it is especially useful for your audience to join in these, as it gives the audience a space in which to refocus between scenes.

Asking a Question
There are many points in stories when the teller can ‘step out’ of the tale to ask the audience a question. But beware, before doing so the storyteller must know the tale well enough to deal with whatever answer the audience gives.

By telling a story like Goldilocks & The Three Bears. EG: ‘Goldilocks was walking in the woods one day when she came across a cottage and the front door was open. “Now, would you go into someone else’s home just because the door was open?” If the response is ‘Yes’ the storyteller can continue ‘and that’s just what Goldilocks did’ if the response is ‘No’ the storyteller can continue ‘well, you’re sensible, Goldilocks wasn’t, she went right in’.

4. Have a group discussion

Talk through the group’s favourite stories, or the ones they are currently working on and find these points of ‘moral dilemma’ where questions can be asked.

Each member should tell the rest of the group a story, which incorporates asking them questions. Then ask them:
Which questions impeded the flow of the tale?
Which enhanced the listening experience?
Find out the reasons behind this – were there too many questions? Were the questions in the wrong part of the story?

It is important to do this kind of experimentation away from the final audience, so the storyteller can become aware of how the tale might work when performed ‘for real’. The group should by now provide a safe and supportive environment for beginners to experiment.

Use the Audience and what they know as comparisons in the Story. This helps the audience visualise the story. For example the storyteller can fix the size of a giant in their story by:

Or talking about the giant’s possessions ‘the giant was so big that you could have used his mobile phone as a sledge’.

This technique can also be useful when a member of the audience is starting lose concentration, fidget and could distract others. The storyteller can say something like ‘as blue as that girl’s jumper’ (while pointing). As long as the storyteller’s voice is friendly, this will refocus ‘that girl’ and help the audience to settle.

Watch how an audience reacts to:

The storyteller lowering their voice. This is an invitation to the audience to ‘get closer’ as if they are about to be told a secret. Again an engaged audience will instinctively lean towards the teller.

So try lowering your voice to focus the audience before telling especially important narrative sections of the story.

When using words such as ‘everybody’ a storyteller can hold their arms wide out and then bring them together so as to embrace the audience. The audience will respond by fixing their eyes to the storyteller’s face.

When the storyteller points at different parts of the performance area, the audience’s gaze will follow their hand. This is useful to set certain geographical features of the story – like a door or an expanse of ocean – in their correct place in the picture in audience members’ minds

Storytellers need to keep practicing until these techniques are as much a part of their repertoire as the stories themselves. And they need to watch other tellers and learn to analyse just how to engage an audience.