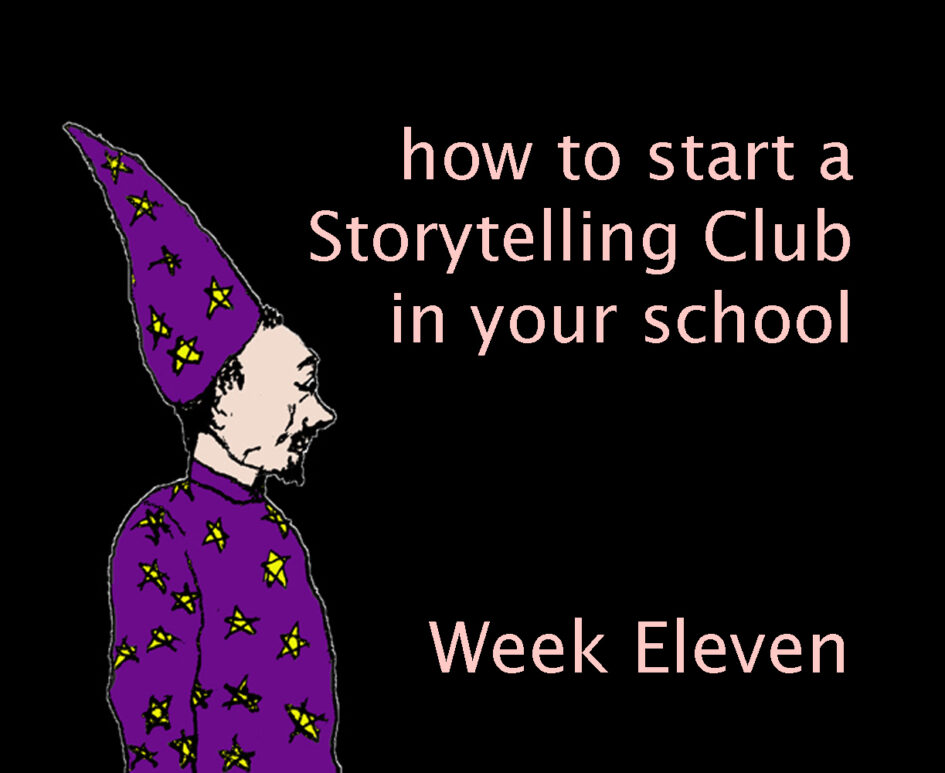 Storytelling is not the same as acting; but very few storytellers will stand stock still throughout the telling of a tale.

Before starting a story, a storyteller should take a moment to ‘centre’ or ‘compose’ themselves in front of the audience.

Get your group to stand in front of a mirror and ask themselves the following questions:

Do I look relaxed?
Am I evenly balanced on my two feet?
Do I look natural, friendly and approachable?
Am I ready to share a story with the audience?

Finding gestures that enhance the story

Many activities are common to traditional stories. There is a list of six examples of these at the foot of this post.

Don’t show these to the group first – keep them hidden.

Get into groups of six, each member taking a different one of these, without showing the rest of the group which one they have.

In turn the group members ‘mime’ their action, while the others try to guess what they are doing. They must keep in place, not start walking or running around and silently perform their task.

Pull the groups together and have a whole group discussion about the actions used. How can these gestures convey the meaning more effectively? Should they be bigger? Faster? Slower? Etc.

In order to convey these actions effectively, the storyteller needs to understand just what is happening. Most people are familiar with ‘combing long hair’, but not many have ‘pulled back a bowstring’ and very few people will have operated a spinning wheel, or even seen one in use.

Tip: The strain of pulling back a bowstring also shows in the archer’s face, think about the effect of these gestures on the whole body.

A badly-done gesture can distract the audience, bring them out of the story and even question the veracity of the story as a whole.

So sometimes a storyteller needs to research their gestures – YouTube is a good first port of call, but in the end there is no substitute for trying out the actual activity, if at all possible.

Having decided on the most appropriate miming gesture, try doing this while saying the phrase, and decide:

Should the phrase be said before the gesture?
After it?
Part before and part after?
Simultaneously?

Some of the words on the examples used are arcane and might not be understood by a young audience. So changing the words to make them more understandable, but keeping the gestures the same.

Tip: The way a word or phrase is said can also amplify the gesture. Experiment with elongating words, a staccato delivery, raising and lowering the voice in pitch or in volume.

One of the most difficult parts of a story to convey effectively to the audience is a conversation – the audience can get lost with all the ‘he said’/’she said’.

Altering your posture for different characters (like in the Princess and Pauper game in Week Six: Characterization) helps. These postures can be enhanced by gestures or moving your body.

4. Conversations with yourself – switching between characters

Select a point in the story where there is a dialogue.

Try moving the position of your head to indicate who is speaking.
Eg: Jack and the Giant perhaps the giant would look down at Jack, while Jack would crane his neck to see the giant.

Eg: Two friends walking through the woods try turning your head to the right when one friend speaks, and two the left when the other speaks.

Try these out, how does they feel?

Repeat the conversation, this time taking a step to the left / right as well as turning your head so as to indicate the position of the speaker. Is this more convincing? Or does it simply look messy? The answer may be different for each storyteller. It is important that storytellers develop a style that suits them and is easiest on the eye for the audience.

Tip: Keep practising, in private, but don’t do anything in public that you are uncomfortable with. It might become easier with practise, but it might just not suit you.

Repeated phrases in stories can also be times for repeated gestures. Both enhance the audience’s connection with the story and the teller. The audience will often join in with the actions as well as the words.

Listen to the story of ‘Tikki-tikki-tembo…..’

The storyteller, Joe, has this in repertoire as a duo with Jen in ‘Short Stories and Tall Tales’. For their performance they developed three simple hand-and-arm movements to encompass the repeated phrase “What? … has fallen down the well? What shall we do?’

Have a go – see what you can come up with. Share your ideas and tell the story. It is great fun.

And here’s the list of those common phrases promised earlier…

He drew his sword from its scabbard

He brandished his sword

He fitted the arrow to the bowstring and let it fly

She sat and span her foot gently rocking the treadle

She drew water from the well

She combed her golden tresses