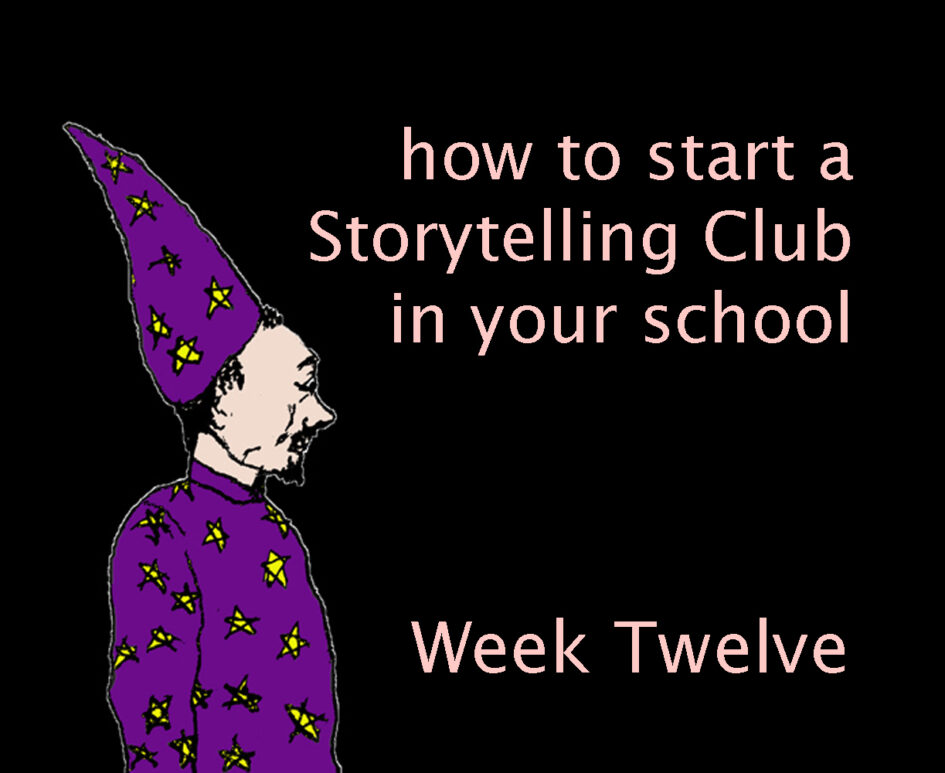 Storytelling is a two-way process. How can the storyteller convince each audience member they are having a personal experience, even when in a crowd?

The most important thing a storyteller can do is to make every single person in the audience believe that they are being told to directly and individually, rather than as part of a crowd. In theatre, actors are trained to not make eye contact with the audience. After all, with stage lighting and a virtual black-out in the auditorium, the actors would have great difficulty actually seeing anyone in the audience. Actors are traditionally trained to look just above the audiences’ heads and address their words to the illuminated ‘Fire Exit’ signs at the rear of the theatre. But actors are playing a part, a storyteller is a friend telling you a story. Storytellers have to make eye contact with their audience.

1. Talking To The Audience

Tell them to try to make eye contact with each and every member of the group who make up the audience as regularly as possible during the telling of the tale.

Ask the audience to raise and then lower their hands to signal to the storyteller every time that they believe eye contact has been made.

Repeat, until everyone has experienced this exercise.

Have a group discussion. What did the group learn?

One thing that might well surprise everyone is that, when the storyteller thought eye contact was being made with just one person, a number of people in the audience around that person also believed the teller was making eye contact with them; this is ‘the broad gaze of the storyteller’!

Let everybody try the theatrical technique of looking above the heads of the audience and making eye contact with no-one.

Obviously in bigger audiences the storyteller cannot make eye contact with every individual. But remember the storyteller’s gaze is broad, so when the storyteller is first telling to a large group it can be very helpful to have friendly faces interspersed at key points around the auditorium.

Gather the group in a larger space.

Assign different positions to each of the members of the group, so that there is someone in each section of this auditorium space.

Each storyteller should tell their story, making eye contact with each of the friendly faces regularly throughout the tale.

Again, members of the audience should signal when eye contact is made, so the storyteller can be reassured that they are including the whole audience.

Try this a few times, if possible, before a public performance especially if it is one where you would be unable to plant friendly faces. The storyteller will have learnt how to scan a space and, by imagining the plants still to be in position, be able to make contact with the whole of the audience.

Some stages can be very large, but unlike a gymnast this should not be seen as an invitation to use every area of that space at least once during the telling. This doesn’t mean a storyteller should not move. A storyteller should command the centre stage. And by ‘the centre stage’ we mean an area in the middle of the stage about the size of a standard rug – 2m deep x 3m wide at the very most.

One of the worst crimes a storyteller can commit is ‘jarring’ a person out of a story by doing something incongruous, like gesturing to their right for the door at one point, and having someone enter through the same door but to their left at a later point in the story.

This game helps reinforce the image in the storyteller’s head, so they are clear about what they are conveying to the audience. Because it is based on the story Goldilocks & The Three Bears it is called:

4. Don’t Sit In The Porridge

Split the story of Goldilocks into scenes (see above)

Storyboard, or make a mental image of each scene, so you really know the physical layout the story takes place in.

Using garden canes or string, lay out the ‘floorplan’ of the first scene so that it occupies an area roughly the size of that standard rug.

Tip: This will not necessarily be to scale, but it will show the relationship of each facet of the surroundings to each other.

Stand in the centre of the ‘rug’ and tell the scene, keep your feet still and use arm and head gestures to convey the floorplan to the audience.

Repeat this exercise for each separate scene.

Now move between the scenes. Do you need to physically step out of one scene? Or will a gesture suffice?

Make sure you move/gesture in a direction that does not disturb the image you have so carefully conveyed to the audience.

Now reposition yourself on the ‘rug’ and build the next scene in the audience’s minds.

Check: Did you walk through a table? Have you sat in the porridge? Has the staircase moved?

These exercises should have the apprentice storyteller fully in control of their material. But they will need to revisit all of those elements that have been taken on board over the course before finally Taking The Stage.

RECAP: BEFORE STEPPING ONTO THE STAGE CONSIDER:

Where are there references to Taste, Touch, Smell, Sound, Emotion?

Which of these were especially helpful to the story?

Can any others be added to improve the story?

Can some be lost without any detrimental effect?

Are you utilising enough repeat phrases and sequencing phrases?

Do all the characters in the stories need a rounded character, or would some of them play their part just as well if they were stereotypes?

Does each rounded character have their own Stance, Voice, Movement?

Was there anywhere in the story where a sentence, gesture or description could be added/taken away to enhance a character?

Is there potential for humour?

Can you add dialogue, descriptive language or a slapstick movement to bring out this funny side?

Does the story have a recognisable shape?

What was the balance between dialogue, narrative and speech?

Could you make the story more interesting by changing this?

Should they take up more or less of the storytelling time?

Do these have enough dialogue and descriptive language?

Which are particularly effective?

Could any be omitted without detracting from the story?

Should they be Bolder, Smaller, Quicker, Slower?

Movement On the Stage:

Does the movement enhance the story?

Are there any opportunities for the audience to misinterpret your movements?

Ask a question
Get the audience to join in a repeat phrase
Involve call and response
Lean/move towards the audience
Lower your voice to invite the audience in
Use inclusive hand gestures?

Are these effective? Are any of these ‘risky?’

Are you in control of yourself,

your material and your audience?