The Wishes of Savitri 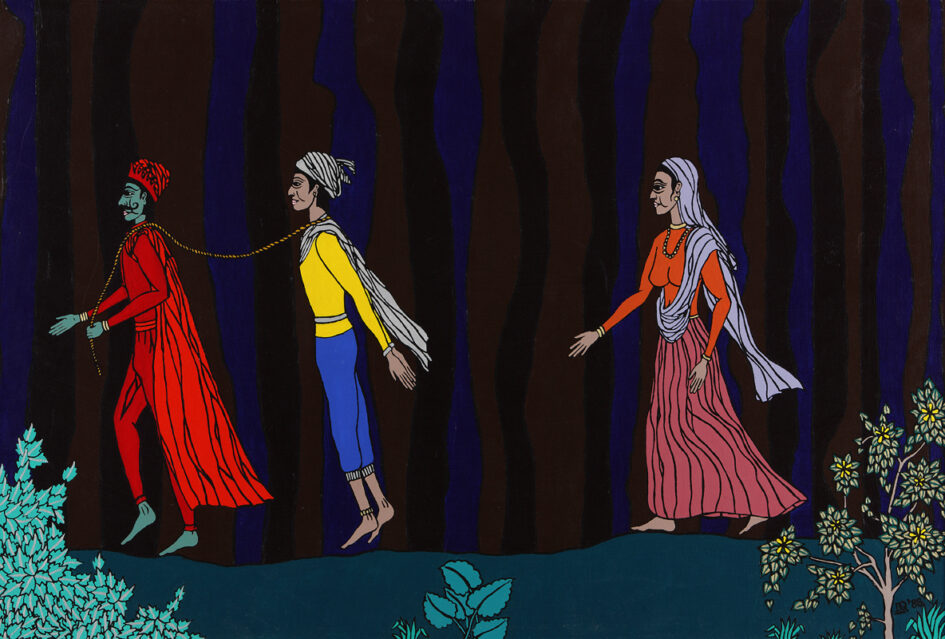 King Ashwapati had a problem, it was time for his daughter Savitri to marry. Now, Princes aren’t that easy to find, especially ones a King’s daughter will agree to marry. So even though Satyavan was a very poor prince, son of an old blind king cheated out of his lands with no more than an old forest shack as his kingdom, King Ashwapati was glad Savitri had at least not fallen in love with a beggar.

Wedding ceremonies can be a bittersweet moment for the father of the bride. Happy, yes when it’s the happiest day in their daughter’s life, but fearful too knowing the girl who has had everything is off to live in a tumbledown shanty in the woods. Then to make the whole day really fall flat in stepped a holy man with a gift for seeing into the future shouting that Satyavan had only a year to live. Despite the bad news Savitri and Satyavan were wed.

Well, married life in the forest was wonderful for 364 days, but death came visiting Satyavan on the 365th. Lord Yama, the god of death, arrived with a noose to slip around the prince’s neck to drag him away from this world to the next.

Savitri had heard the prophecy, she had witnessed her husband’s death, but she was having none of it. She raced after Yama who was running through the forest dragging Satyavan behind him and refused to give in.

Yama looked back, and he was angry at first, but gods can see more than mere mortals, he had to admire such devotion. Ever fair he thought it deserved a wish, as long as it wasn’t to have Satyavan’s life of course.

“I wish for my father-in-law’s sight to be returned”, said Savitri.

Off went Yama at full speed straight through a prickly thicket still towing Satyavan behind, and imagine his surprise when he heard Savitri’s footsteps echoing after him.

“I wish for my father-in-law’s kingdom to be returned”, said Savitri.

No sooner said than it was done. Off went Yama faster than ever through a teeming raging river and up a sheer mountainside dragging his prize, Satyavan, behind him. But Savitri didn’t know when she was beaten and went haring on behind.

Exasperated Yama turned, “one more wish and that’s it! And this time have something for yourself, you’re a quite extraordinary girl and you deserve a treat.”

“I wish to have children, and to see their children grow”, she said.

Yama was about to finally go on his way, when Savitri called him back.

“Yama you are god of truth as well as god of death how can a Hindu woman like me have children. The law says I can only marry once and you are taking away my husband, the father of my children to be.”

Yama looked as if he was about to burst with anger until he erupted into laughter.

“You’ve tricked me,” he cried, taking his noose from Satyavan’s neck. “Take him back, your love for your husband has defeated me. It will be a long, long time before we meet again.”

If you were given three wishes, what would they be?

Pictures of Other Worlds

Can you draw or paint a picture of what you think the land between this world and Yama’s kingdom, that Savitri had to run through, looks like. There’s a little bit of description, to get you thinking, in the story. But you’ve probably got your own ideas, too.

The Road Gets Rougher

Running through the in-between worlds can’t have been much fun for a young woman like Savitri, but after a wish the going got tougher.

Before the first wish, Savitri ran through the forest with the twigs of the trees clawing at her clothes and scratching at her skin. Her bare feet were blistered and cut by stones and thorns.

It’s not over yet. Now make it worse still. Describe Savitri’s chase before Yama granted the final wish.

Download the picture for a print-ready template of ‘The Running Man’. But he’s not running yet. It’s your job to help him.

Print the picture on to card or thick paper and cut around the body parts. You can lay them out so the knee, hip, elbow and shoulder joints overlap. Try moving the arms and legs to make it seem as if the man is running.

If you have painted a picture of the in-between world, that would make an ideal background for your man to run through.

If you have access to a photocopier you can photocopy each different position. Remember the photocopier looks up at your picture, so you need to put the bits at the front of the picture on first (face down), and the background on last. Yes, it might take a bit of practice.

If you haven’t got a photocopier you could still take pictures of your animations with a digital camera.