From The Grasp Of Death 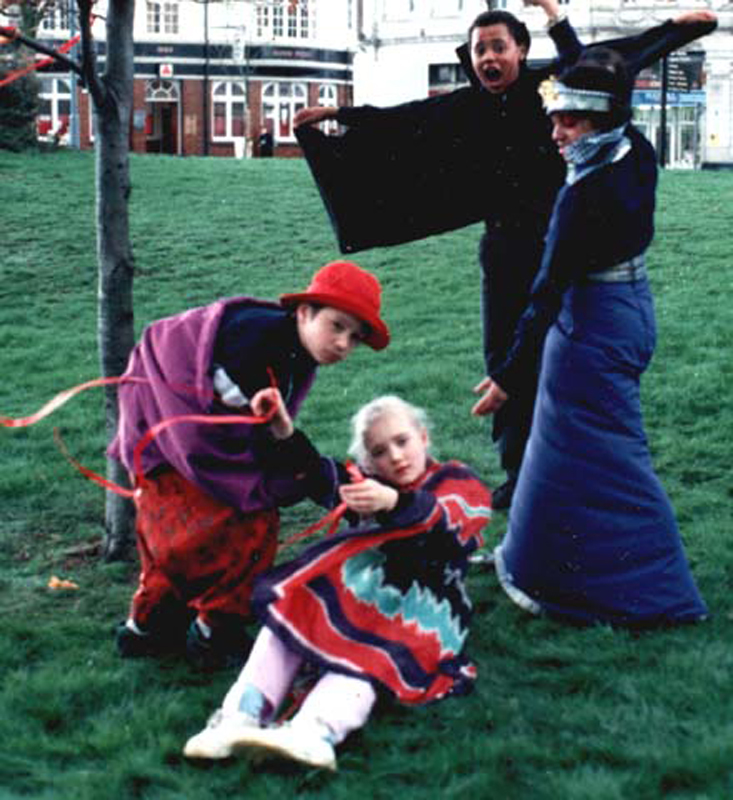 Lord Yama, god of death, sat beneath a tree in paradise playing his flute.

In the branches above him sat his companions, pigeon and owl.

His four-eyed, stripped dog sat at the gates of paradise, half sleeping, half watchful.

The music stopped, it was time for Lord Yama and his messenger to collect those who had lived out their time.

Little did the young and beautiful Pramadarva know that today she had reached the end of her oh, so short span of life.

In her innocence she was blissfully happy with her husband to be, a wise and handsome Brahmin named Ruru.

They watched her friends dance and sing for the joy that their future would hold.

A scream cut through the air.

A venemous serpent had bitten Pramadarva.

She laid motionless on the ground.

Ruru ran to her lifeless body crying out to the gods.

“Give my love back to me, did all my prayers mean nothing?”

All was dark as Ruru’s upturned face met the gaze of Lord Yama’s messenger.

“Pramadarva died at the chosen time. I have come for her soul.”

“Can I do nothing to stop this?” pleaded Ruru.

“Give half your life and Pramadarva may live”, answered the messenger.

Ruru eagerly took this offer. What was his life worth without the one he loved.

With an all-knowing smile Lord Yama let the bargain be.

Pramadarva opened her eyes, she was returned to life.

“I dreamed that I was waiting at the gates of paradise”, she told Ruru.

Pramadarva and Ruru were married.

The wedding was a great celebration, everyone was so happy.

Pramadarva’s and Ruru’s love and happiness lasted all through their so short lives.

Before too long, their dying day came.

Lord Yama transported them both to paradise together, hand in hand.

And together in paradise, no doubt, they still dwell happily ever after.

What you see in the images that accompany this story is the result of a workshop held at Lanchester Art Gallery, Coventry in 1991 in aid of Amnesty International. Photographer Denis Kelly and I worked with pupils from Southfields Primary School to illustrate, retell and document the Hindu story of Ruru & Pramadarva.

In those far off days there was an annual art auction to raise funds for Amnesty International in Coventry and the organisers in their wisdom decided to make the duration of the viewing a jamboree of related events including workshops with schools. That’s where we came in!

The workshop took place over one school day. We all converged on Lanchester Art Gallery, the school on foot carrying four black plastic dustbins (dressing up clothes, art materials, cardboard, paper and kitchen waste packaging), we arrived after a long and harrowing car journey armed with four manual cameras, face paints and the story.

While a nervous gallery curator covered the carpet with plastic sheeting I gathered the children together in a more tranquil setting and told them the story. After a quick discussion on storyboards and comic strips the pupils decided which were the most important pictures the story had left in their minds and then set about recreating them.

A cooperative maelstrom broke out (if such a thing is possible – it certain looked like it was). Actors were agreed and costumes created, props and scenery made in alarming haste with paint flying perilously close to the unprotected art works on the gallery walls, make-up was applied, directors drew sketches for theatical tableaux, and Denis gave rapid fire insturctions in the use of manual cameras to our documentary team, who then roamed the gallery taking fly on the wall and posed record shots of the process.

At noon everything stopped for lunch apart from the curator’s panic as he watched part eaten sandwiches and crisps; sloppy yoghurt and sticky orange squash, flying around his hallowed environment.

After lunch we all went outside to pose and photograph the scenes and just before 2.00 o’clock we had shot our seven pictures plus the official team photo. Sorry Denis someone had to be holding the camera and yes, my little instamatic does shoot something completely different to what you see through the lens.

As the pupils went back to school to record the experience in artworks and words, Denis and I rushed off to the one hour processors with the film in our hot hands. Thanks to the man at the machine breaking all records we were back at the school showing the children the pictures by 3.05 giving them just enough time to write captions retelling the story before the school bell rang for home time.

We assembled photos and captions onto a display board which was hanging on the wall at the Gallery by 4.00pm. We got back into the car to face another jam on the M6, and that was the end of just another day.

The Art of the Illustrator

The first part of the story tells us quite a lot about Yama’s Kingdom. Draw the picture the description creates in your mind. Ask a friend to draw the picture, too. Are your pictures the same? What differences are there? Talk it through with your friend and see if you can work out why some of your ideas differ, and why some are the same.

Why not try making your own four-eyed, stripped dog mask? As the base of the mask you can either use a large brown paper bag or make a paper mache mould on a balloon. Here’s how to make two moulds:

Blow up a normal round balloon, until its about the same size as your own head. Then mix some wallpaper paste until it’s a quite sloppy glue – if you don’t have wallpaper paste you can make the glue by mixing flour and water. Dip sheets of newspaper in the glue so that the glue soaks through the paper, then carefully lift the sheets out of the glue one by one and layer them around the balloon until the balloon is covered with paper at least six sheets thick all over. Now leave it for at least a day to dry. You can tell when it is dry because when you tap the paper it will feel hard.

Stick a needle through the paper to ‘pop’ the balloon and then carefully cut the shape into two halves – now you and a friend have the base for your masks.

Build up your mask’s face by using clean recycled paper packaging or cut out pieces from egg boxes. Old bits of material could be stuck to the mask for ears, or string for whiskers.

Then paint your mask.

Pramadarva “watched her friends dance and sing for the joy that their future would hold”. But the story leaves it up to your imagination to think what the perfect future for Pramadarva and Ruru would be. Can you describe what you think their perfect future might have been?

The Most Important Day of Our Lives

Some people say that your wedding day is the most important day of your life. Ruru and Pramadarva’s wedding day looks like a wonderful celebration. List your ten essential ingredients for the best ever party. You never know, the list might come in handy one day.