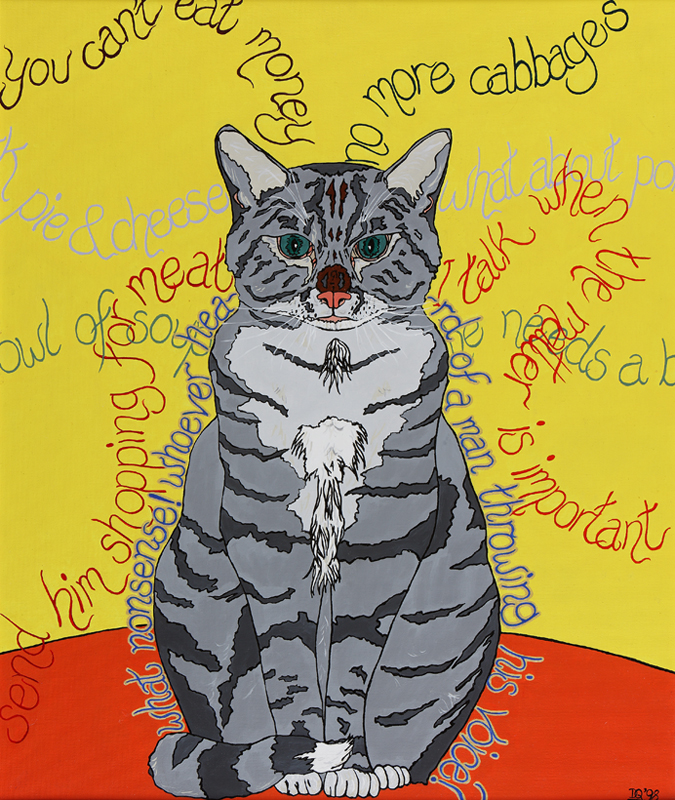 Saturday, make the fresh pan of cabbage soup. Add a little water day by day to the slowly simmering pot. Tuesday, bake new bread in the old oven in the yard, weather permitting. By next weekend soak wedges of the stale loaf ends in the soup, it’s got to last until Tuesday.

Life on Tante Odette’s smallholding wasn’t one you’d envy, but she got by. Long Fall and Winter evenings brought the only taste of discontent. The light wasn’t any too good for working late at her loom and time could lay heavy. Oh, for a little company. Sure she had her age-old companion Chouchou the cat, but Chouchou could only sit and purr, cats can’t talk.

Then one Fall evening, from out of nowhere, came a rather strange old man, his name was Pierre Leblanc. Pierre was one of those people who, when they come knocking at your door, your first reaction is to wish you’d been out. Pierre had crinkles on his wrinkles, his face looked like old tanned leather left too long in the sun. On his top lip was a moustache so bushy you never need worry about loosing the yard broom again. He had squinty little eyes and a nose with far too many bumps. If all this was not enough, to emphasise his large stomach he wore a bright red sash around his middle. Then the strange apparition was topped off with a tiny woollen hat with a large black crow feather precariously clinging to its side. Pierre was not a man you could easily forget.

Pierre knocked at Tante Odette’s door offering to work around the place, to do the awkward chores. He wouldn’t take no for an answer. She was trying to close the door, he had his foot in the jam.

“Don’t reject me out of hand, ask counsel of that wise cat by the stove.” Was this man mad? Then up piped the cat, as clear as clear can be. “This looks to be a fine old man, and some of the work is getting to be a trial for you with your aching joints. Take him on. Take him on, but first things first, he needs a bowl of soup.”

Pierre was a good worker, entertaining company of an evening too, always there with a yarn or two. Chouchou sat near the fire listening with an inscrutable smile on his face. And then one night after a particularly good tale about a grizzly in his canoe up piped Chouchou again.

“No more cabbages, Pierre can’t work on cabbage soup and stale bread. What about pork pie and cheese?” Well, the idea was quite tempting to Odette too. Her new comfortable life had grown on her, a change for the better in the diet would be quite welcome.

Now Tante Odette wasn’t that badly off, she’d led a frugal life and she’d always been one for saving. Some might have called her a miser for when Pierre was out chopping wood she would look out the old sock from her work basket and empty out her little treasure of coins and run them through her fingers. Chouchou would watch out of the corner of his eye and smile, and sometimes Odette would have the idea that someone else was looking too, but she never saw that faint shadow at the window.

After a few nights of cut and come again at the pork pie and cheese Chouchou stretched his whiskers, yawned and sat up looking straight at Tante Odette. “You can’t eat money you know. Pierre’s known as the best bargain hunter in all Canada, send him shopping for meat.”

And what do you know, Pierre was a clever one with a deal. When he came home from the store next day he’d made those few meagre coins stretch to a bag of candy for Odette and a rub of tobacco for himself as well as the finest cut of meat the old lady had seen in many a day.

Life that Fall and Winter was fine, Tante Odette had found something she never knew she’d lost, happiness. Then, with the coming of Spring, came another man to her door. Georges, for that was his name, wore a red sash too and spoke of his crafty old friend Pierre, who he wanted to join him up country on a trapping spree. Georges described his old friend in exhaustive detail for some moments or more, finishing with, “…not a man you could easily forget.” Then after pausing for breath he added, “He’s entertaining company too. He can even throw his voice.”

Now I’m sure you’ll remember just how strange a sight Pierre made. Well, Tante Odette was certainly in no doubt that Georges’ little cameo piece fitted her Pierre to a tee. Pierre was off at the store so she sent Georges away, but now she was in pensive mood.

Odette had some time for thought before Pierre’s return and had her questions ready formed. “Well old man are you to be away trapping, off with your fine friend Georges?”

“We get no younger Odette. I’ll be warmer and happier next to that old stove of yours, if you have need of me.”

“But what of all this throwing of voices. Tell me how can I trust a man who does that?”

The wise, old cat stirred by the stove and slowly puffed himself up to his full height. “What nonsense! Whoever heard of a man throwing his voice? Now enough of all this skylarking, ask Pierre to stay and pay him a wage or he’ll be off trapping, then who’ll do all the chores?” With this long speech Chouchou shook himself from head to tail, turned slowly round and around, padded at the old rug, snuggled his whiskers down and snored off to sleep.

With Chouchou dozing by the fire, Pierre telling a convoluted tale and Tante Odette rocking in her favourite creaky old chair the three lived happily from that day on.

There is an elaborate description of Pierre Leblanc in the story. He must have been a very distinctive character.

Can you draw your idea of what he must have looked like?

When Pierre got the cat to talk he reaped the benefits: a bowl of soup, then a pork pie and cheese, some meat and finally even some wages.

If Chouchou really could talk what four things do you think the cat would really ask for?

Below you can see the first letters (and a couple of last letters to avoid confusion) of 18 members of the cat family, see if you can guess the names? Hey! Wait a minute there are 20 names below not 18. That is because the first three are alternative names for the same cat.

The solutions to these and the other puzzles on this post are to be found by clicking + at Answers to Activities at the foot of this post.

Get yourself a piece of paper and in the top left corner write the word cat. Now your job is to continue around the border of the page writing names of animals that start with the last letter of the preceding animal, (e.g. catiger the t at the end of cat starts the word tiger).

See if you can get all the way round the page until you reach the word cat again.

If you make it to the end you’ll need an animal with c as the last letter of its name, and they are so rare!

Here are two hints to one such animal’s identity…

This animal comes from Madagasca.

It has the largest litter of any mammal, up to 32 babies.

The Cat Came Back

Old Mr. Johnson had troubles of his own,
He had a yellow cat which wouldn’t leave its home;
He tried and he tried to give the cat away,
He gave it to a man going far, far away.

The man around the corner swore he’d kill the cat on sight,
He loaded up his shotgun with nails and dynamite;
He waited and he waited for the cat to come around,
97 pieces of the man is all they found

He gave it to a man going up in a balloon,
He told him for to take it to the man in the moon,
The balloon came down about 90 miles away,
Where he is now, well I dare not say.

He gave it to a little boy with a dollar note,
Told him for to take it up the river in a boat;
They tied a rope around its neck, it must have weighed a pound,
Now they dragged the river for a little boy that’s drowned.

He gave it to a man going way out west,
Told him for to take it to the one he loved the best;
First the train hit the curve, then it jumped the rail,
Not a soul was left behind to tell the gruesome tale.

The cat it had some company one night out in the yard,
Someone threw a boot-jack, and they threw it mighty hard,
It caught the cat behind the ear, she thought it rather slight,
When along came a brick-bat and knocked the cat out of sight.

Away across the ocean they did send the cat at last,
Vessel only out a day and making the water fast;
People all began to pray, the boat began to toss,
A great big gust of wind came by and every soul was lost.

On a telegraph wire, sparrows sitting in a bunch,
The cat was feeling hungry, thought she’d like em for a lunch.
Climbing softly up the pole, and when she reached the top,
Put her foot upon the electric wire, which tied her in a knot.

The cat was a possessor of a family of its own,
With seven little kittens, ’til there came a cyclone;
Blew the houses all apart and tossed the cat around,
The air was full of kittens, and not a one was ever found.

The Mystery animal is a Tenrec.