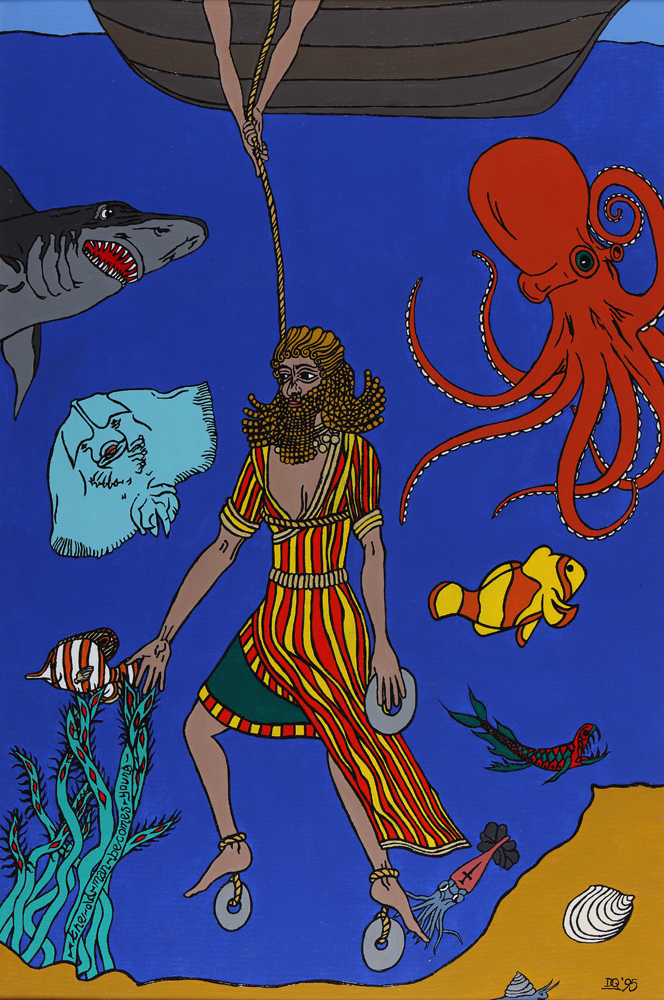 On the one hand there are the gods, and on the other are humans: Breeds apart; but when they breed together all you get is trouble; big trouble!

Gilgamesh, King of Uruk, was two-thirds God and one-third human, and 100% trouble. 18 feet tall, a seething tower of testosterone. None of the women were safe from him and all men were his slaves.

The humans would turn their backs on the gods if they did not tame Gilgamesh so the gods created the King a massive playmate, Enkidu; part-man, part-beast. The two giants bonded in combat and then went off on noble adventures leaving the people of Uruk to get on with their lives.

Tragedy struck when Enkidu died and Gilgamesh experienced grief for the first time. Not just grief and loss, but also the realisation that one day death would come to him too.

Gilgamesh could not come to terms with his friend’s death or the looming destiny of his own final fate: He set off on a quest to find eternal life.

He walked to the end of the earth, to the dark mountain where the sun rose and set. He walked further through absolute emptiness between this world and the next; the gods’ domain. He needed to find Ut’napishtim and his wife, the couple who had saved the world from the great flood and had been rewarded with life eternal; he needed to find the secret.

After facing the temptations of the gods and navigating the sea of death he found them.

Ut’napishtim said he would give up his secret if Gilgamesh could conquer the ‘little death’ of sleep, but he was so, so tired.

Gilgamesh was about to return defeated when Ut’napishtim’s wife pleaded with her husband – not eternal life, but what about rejuvenation?

Ut’napishtim told his boatman Urshanabi to take Gilgamesh to the place at the centre of the oceans, to hold the rope and send Gilgamesh diving down to fetch the thorny plant ‘the old man becomes young’.

Go to the conclusion of the story at “The Snake Sheds Its Skin”.

In August 2006 the museum’s display of two acrylic paintings of the Epic of Gilgamesh by Dez Quarréll was enhanced under the Illuminate programme of NESTA (National Endowment of Science, Technology and the Arts).

“Touch It” was created in summer 2006 by sculptor Neil Dalrymple, pupils from Thomas Adams School, Wem and storytellers from Mythstories museum.

The pupils looked at Neil’s work.

Then they listened to the story and sketched the ideas it inspired.

Neil Dalrymple took these sketches and created the vitrified clay relief tablets you can see here, and touch when you visit the museum.

Where is the rest of the shark?

What is the octopus’ other leg doing?

First save this picture to your desktop:- right click on the picture – select ‘save picture as’ – then hit ‘save’.

When you want to extend the picture:- double click on the icon on your desktop and the picture will open in your paint programme.

You can either:- resize the picture so it prints out in the centre of a sheet of A4 paper with enough room around it for you to draw or paint your extensions.

Or:- increase the canvas size of the picture and extend the picture in your paint programme on-screen.

Many More Fish In The Net

I hope you’ve bitten the bait and want to know more about undersea creatures. There’s lots of information and even ideas for projects on the net if you search hard enough.

Make Your Own Diver

A plastic bottle filled with water

A pen top (without a safety hole in the top, or with the hole blocked)

A bit of sticky putty

Put a blob of sticky putty on the pen top just big enough to make it sink just under the surface of the water with air trapped in the cap.

Stretch the mouth of the balloon over the neck of the bottle. You don’t need to blow the balloon up but make sure it has a little air inside so it’s not flat.

Squeeze the balloon and the diver will sink.

Let the balloon go and the diver will come up again.

When you squeeze the balloon you compress the air trapped in the pen top making it denser than water so your diver sinks.

O Mother mine, spread me the silken sheet,
And let me lie down and cover me with rose leaves.

For love-sick am I, and flames of love consume me.
And if I die tomorrow, Mother, I beseech you

Call round me my comrades, the daughters of love,
And over my bier let them sing me my dirge.

O mother mine, yesterday our secret was our own;
Today who does not know it?

My love has gone far,
And now I would write to him.

O you, who are climbing the mountain,
A drink will you not give me from the hollow of your hand?

In truth, I am not thirsty,
But I would have a word with you;

And it may be the wind will lift your scarf
And let me look full at your face!