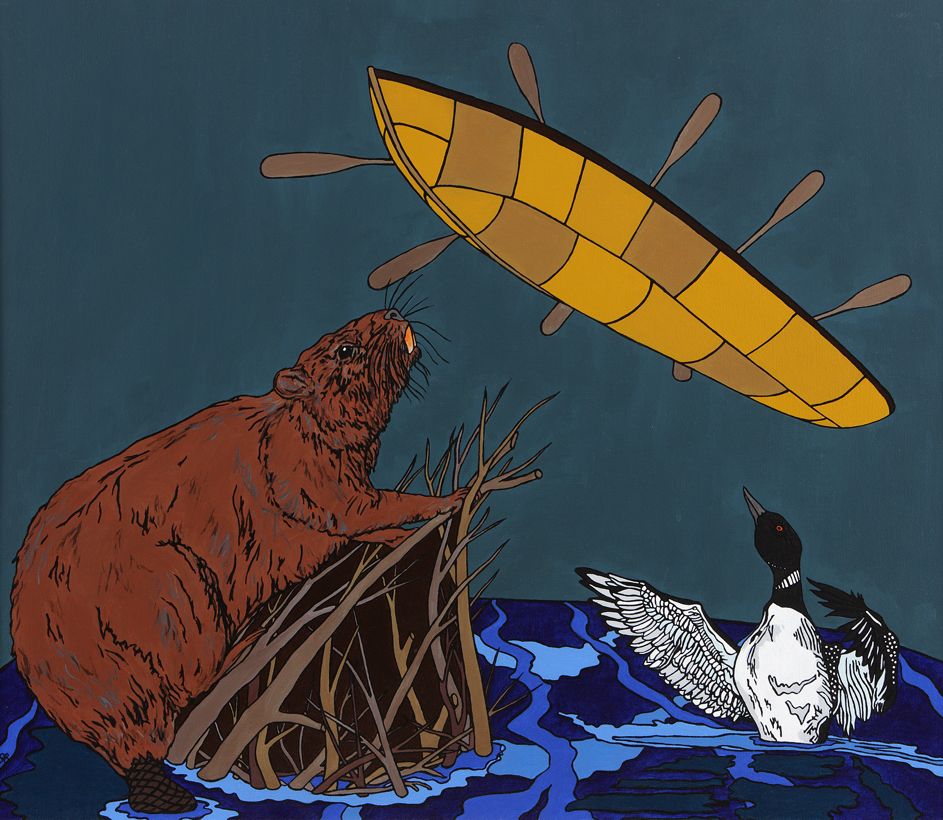 A long winter’s trapping in the cold unforgiving lands of the north didn’t give the hardy voyageur much time for taking his ease. But at one time of day you could be sure to see a far away look come into his eyes.

As he stared into the glowing embers of his fire late at night the here and now would mist over to be the then and there. He’d wish the then was now and the there was the bustling streets of Montréal.

He wasn’t the only one, every hommes du nord shared his dream, and sometimes it was hard to bear.

That one night as they sat around the fire bewailing their lot the lure of the Montréal high life seemed almost too strong to endure.

No-one knew when he came, or from where, but he was there and appealing to them in that syrupy voice the trader would use when he wanted to off load his most useless supplies.

“A small price to pay”, that’s what he’d said. Just not to utter a sound on the journey, that was all. They, in their canoe, would be flown back to where their hearts yearned for most, and quicker than they could possibly imagine too. And what if they made a noise, why he’d claim their souls, now was that such a bad thing to risk?

These were brave strong men who faced fear with a smile on their face and, after all, keeping quiet is not that much of a challenge for anyone.

Next they were up in the skies flying over the frozen lands they knew so well. Now, if you’ve ever been told to keep quiet you’ll know that is the very moment when you want to talk. If you add the magic of recognising somewhere you know from high above in the air you’ll know how they ached to speak and share their wonder.

Bitten lips and tongues and twisted faces watched all those remembered sights from beyond Lake Superior all the way down the Ottawa River and back to Montréal, but not a single word was heard.

The smell of cooking on the smoke that stung their eyes, the lights and the noise showed them they had arrived. A thousand memories were now crystal clear objects they could reach out to touch. It was too, too much. As one, their mouths opened and…

Chasse-galerie is a French-Canadian folk tale told by trappers and lumbermen. They would sit around their winter fires telling the story to each other. They would vie to see who could be the best storyteller and come up with the best ending.
Now it’s your turn … See if you can finish the story.

What is the thing that would make you shout out for joy when you reached home and saw it below?

Can you draw it?

What do you think the beaver and the loon had to say to each other after the canoe had flown over?

Why not act out their conversation with a friend, or maybe try playing both characters?

All Those Other Animals

We know the voyageurs flew over the beaver and the loon but there are many other animals they may have seen below in that part of Canada.

Now’s the time to do some research. Can you find the names of another ten animals they may have seen below them on their evening flight?

Take a piece of paper and draw a long wriggly river from the top to the bottom of the page.

At the top draw a log fire next to the river, and at the bottom draw one of the voyageurs houses in Montreal.

Now, here’s the difficult bit … decorate the length of the river between with little pictures of things the man of the woods would have seen on his journey.

Have you made up your ending to the story yet?

No! Well it’s time to get to work and write it down. When you’ve finished email it to a friend and invite them to come up with their own version.

Sing along to this Québécois folk song with a traditional call and response chorus by clicking on the lyric in English or French below.

When the winter comes at last
And the river freezes fast,
Out into the woods we go,
To live for months there in the snow

Wretched man, what lies ahead?
On the ground you’ll make your bed.
In the rain or in the snow,
Cold hard work is all you’ll know.

When you reach Quebec next spring
Aching bones are all you’ll bring
First to see the boss you head,
Ask for cash to buy your bread.

When you ask him to be paid
For the days that you have slaved,
If he tells you he is broke,
You won’t laugh much at his joke.

Then your family with great joy
Welcome home their shanty-boy
Father greets you at the gate,
Mother piles food on your plate.

When they welcome you with cheer
You will say both loud and clear,
‘To the devil with the shack!
Never more will I go back!’