Sedna, Goddess of the Seas 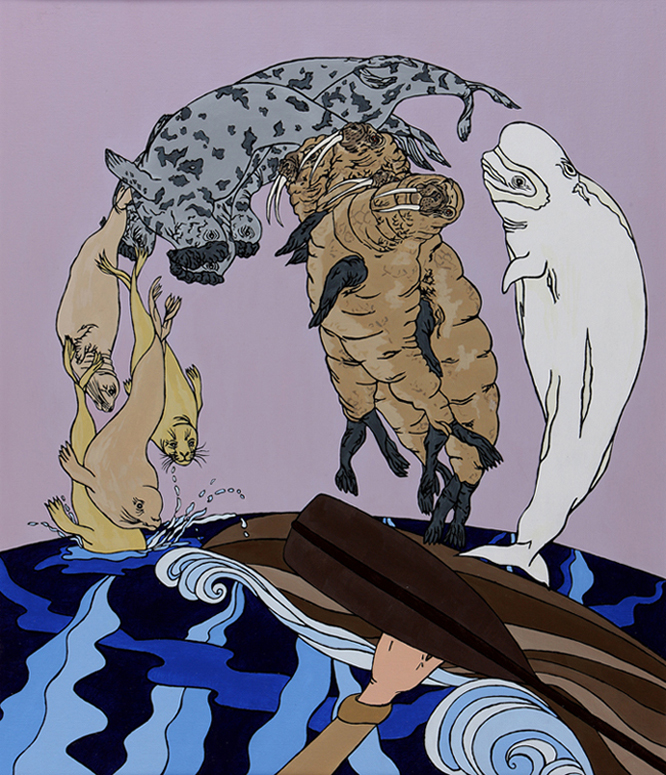 Beauty doesn’t guarantee an easy temperament. And if you should need proof of this look no further than the heroine of our story, Sedna. Sedna’s widowed father was devoted to her, he provided her with a choice of all the young and handsome men from miles around to be her husband. None was good enough for her; she stubbornly refused all comers.

Then one day a very unusual suitor came paddling down the river. He made no move to land his kayak, but even from a distance he made an impressive sight, richly attired and carrying an ivory spear. Most strange of all were his blacked out glasses, which hid his eyes. This definitely wasn’t any ordinary man and could they only see through his disguise, Sedna and her father would have recognised the proudest of petrels. He had seen Sedna when he had flown over the village and was determined to take her for his wife.

At first quietly and then more and more insistently he began to sing. He wove a song of promises, of love and flattery, which captivated Sedna. Despite her father’s protestations, Sedna boarded his kayak and went with him to his nest.

Sedna began her life with the bird-phantom in a swirl of pure pleasure but gradually the enchantment began to fade and she became aware of her surroundings. She was high atop a barren cliff in a rough nest strewn with discarded fish remains. It was cold, wet, uncomfortable and smelly.

Despite this Sedna remained captivated by her husband’s charms and thought him to be the most perfect man. That is until the day when, thinking his wife slept, he removed his glasses. Sedna jumped back in horror as she looked into the bird eyes and for the first time she was able to appreciate the horror of her situation.

When Sedna had gone with the stranger her father had been heartbroken and set off in his canoe to find her. Well, it was the very day after Sedna had seen her husband clearly for the first time that he arrived in the swelling ocean beneath the nest to hear her distraught cries.

Sedna dived from the nest and her father pulled her aboard his canoe and wasted no time in pointing his canoe homewards in case the petrel should return. But as they paddled away the petrel’s sharp eye saw them and he swooped from the skies to intercept them. He pleaded with Sedna to stay with him but she would not. The petrel rose on a sudden gust of sea wind, uttered the strange cry of the loon and, heartbroken, flew off into the empty icy wastes.

As he left a great swell started and storm clouds broke over the kayak. Thunder lightening and rain lashed the little vessel and Sedna’s father was filled with a dreadful fear. He had offended the spirits and surely he was doomed, all that could save him was to throw his daughter overboard into the seething ocean. He grabbed Sedna, she fought him like a devil possessed, the kayak rocked and looked as if it would overturn. They scratched and hit at each other in a violent frenzy. Finally, flailing, Sedna tumbled into the turbulent waters.

As she fell she managed to grab at the canoe, seized with panic her father grabbed the paddle and chopped at her hands. First the top joints of her fingers were severed and as they fell they turned into seals. Then the second joints fell away and became deep-sea seals. The third joints became walruses; finally the fractured thumbs became great whales. And as Sedna sank into the depths a great calm descended over the ocean.

Her father was overcome by a great weariness and rowed to the shore to set up his tent. He crawled inside to sleep and as he slept a great wave came crashing upon him and took him deep, deep to the ocean’s floor. Sedna and her father live there still. Sedna rules over the sea and its creatures and all who die must pass through her kingdom.

Can you imagine what Sedna’s, and her father’s, home would look like on the bottom of the Arctic Ocean?

Write a message to your father asking him to rescue you.

How many sea creatures came from Sedna’s hands?

The solutions to this is to be found by clicking + at Answers to Activities at the foot of this post.

Can you design a border frieze using sea creatures, waves, kayaks or anything else relevant to Sedna’s story.

Still, now,
and hear my singing
Sleep through the night,
my darling.

We have
a tiny daughter
Thanks be to God
who sent her.

Though she as yet
knows nothing
She is so sweet,
I’m singing

The song was originally recorded by an Anglican missionary, Rev. D H Whitbread, who worked with the Inuit of Port Harrison in Quebec. The Rev. Whitbread translated the Inuit version as:

We have
a gift
of a little lady.

She really
doesn’t know
a thing yet.

The answer is 26, made up of 8 seals, 8 sea lions, 8 walruses and 2 beluga whales. (The product of only one of Sedna’s hands is shown in the painting.)