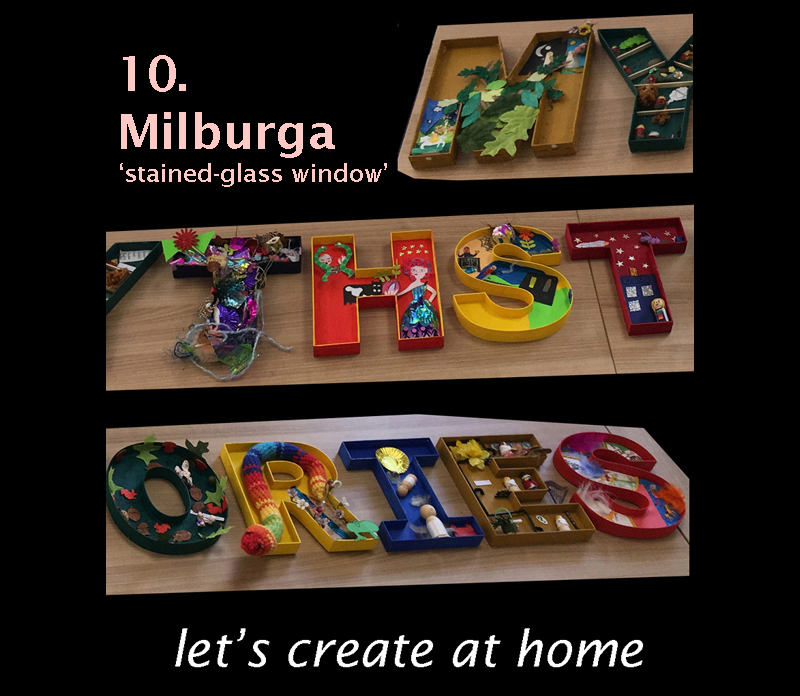 Spend as much or as little time on it as you’ve got to spare. It could keep everyone busy over the next month.

Milburga and the Stained-Glass Window.

This challenge is to make your own “Stained Glass Window” and use it to tell one or all of the many stories of St. Milburga of Wenlock Abbey.

The picture on the right is actually St. Eanswythe, but she is depicted in the role assigned to Milburga in the story of Milburga and the Geese (below). The window is at the Church of St. Mary & St. Eanswythe in Folkestone, Kent.

So who is St. Milburga?

Milburga was the third daughter of King Merewald of Magonsaete (part of Mercia). Her two older sisters were married off to Kings in Northumbria and Kent (just one each!) and became St. Milgitha of Northumbria and St. Mildred of The Isle of Thanet.

Milburga founded her Abbey in Much Wenlock in 690AD.

Milburga’s bones were burnt in the last year of Henry VIII’s reign, 1547.

She’s the subject of many stories…

The geese were in the fields eating all the seeds, which had only just been sown. They could not be scared away.

So the people rushed to the Abbey to ask Milburga for help. She lifted her hand, said a few words and told them all would be well.

When the people went back to the fields, scarecrows had come to life. And the geese were leaving.

But the geese went to the Abbey fields. Milburga called to them and explained that the seeds provided food for humans, they should search for their food in the wild.

The geese agreed, and flew off – but one was missing. Milburga said she would search for it, and found a pile of bones, the bird had been caught, cooked and eaten.

Milburga put the bones in a bag and prayed. When she opened the bag the bird flew out and joined the rest of the flock in the sky.

Milburga was riding along the road to Godstoke, when two men blocked her path, threatening to rob her. She dug her heels deep into her horse’s side and rode straight at them.

The villains fled, Milburga galloped on. Her horse tripped on a stone and Milburga split her skull on a rock.

St Milburga’s Well in Stoke St Milborough She raised her hand and the horse rose upon its hind legs and crashed its hoof down against the offending rock. Water gushed from the stone and healed the Saint.

From that day on that spring has been known as St. Milburga’s Well.

2a – inscription on the stone at St. Milburga’s Well

St. Milburga was born in 664AD, a daughter of the Royal House of Mercia. She became Abbess of Much Wenlock Priory. While visiting her estates here at Godstoc she fell from her horse and was rescued by two local formers. In gratitude she declared that water should always flow at this place and it became known as St. Milburga’s Well.

There were many pilgrimages here and the water was thought to heal sore eyes. She is credited with other miracles and is often depicted with a goose as she banished a flock of them from ravishing her lands.

She is thought to have died around the year 727 and left a testament which listed her estates, including the one of Stoke St. Milborough.

When Milburga was young she loved a pagan called Wolfgang, who wanted to marry her. But as she was a Christian she said she could never marry a pagan. His love turned to hate.

One day, while she was riding along the Edge on her milk-white ass she met Wolfgang overseeing his serfs planting a furrowed field. He got mad and started waving his sword at her in a threatening manner.

She wasn’t afraid, she held up her hand and the seeds that the serfs were sowing immediately began to grow into a full-grown crop, before their eyes.

Wolfgang fell on his knees and converted to Christianity. To this day the grass always grows greener there than anywhere else.

Elated, Milburga rode off on her ass, but by Godstoke the ass collapsed, exhausted and hit its head on a rock, cutting it.

She stayed with it and healed its wound, comforted it and apologised to the ass. At which a fountain burst forth for the ass to drink from and recover.

A red stain is still at the bottom of the well to show the blood of the ass.

Milburga was being tracked by outlaws. She passed a field and asked the men who were sewing the barley if they would help her. She told them that the outlaws would come passed the field later in the day, and the men should tell the outlaws that Milburga had passed ‘when they were sowing the barley’. She held up her hand and the barley began to grow and she told the men to go and sharpen their sickles because the barley would be ready by evening.

That evening as the men were harvesting the barley the outlaws came by and were baffled when the men told them Milburga passed when they were sowing the crop.

When eventually the outlaws discovered that the barley had grown in a day, they repented their evil ways and knew it was in vain to fight against God.

When Milburga was being pursued by a Welsh Prince, she lifted her hand, after crossing the River Corve in Ludlow, and the waters rose up so fiercely the Prince couldn’t follow.

When Milburga was caught by a pursuer he ripped her veil from her face, but the veil did not fall to the ground. It remained hanging in mid-air until it was replaced on her face and the pursuer repented.

Nb In Agnes Dunbar’s “A Dictionary of Saintly Women” it is a dead son rather than a dead daughter.

A very sickly pilgrim visited the Abbey. On bowing down in prayer before the Altar displaying St. Milburga’s bones, she started to cough convulsively. She brought up a 20ft long tapeworm (described as a snake) which one of her fellow-pilgrims bashed to death with a wooden club. Needless to say the woman made a complete recovery.

Milburga was a vain young Princess. One day she rode out alone along the Edge on her milk white pony. She stopped to chat to a hermit in his cave and her eyes were drawn to a fabulous jewel which he possessed. She asked for the gem and without hesitation he gave it to her.

That evening Milburga, who was as intelligent as she was vain, wondered why the hermit could simply give up such treasure. She couldn’t work out why, so the next morning she rode out along the Edge to ask him.

He told her the answer (Christian love) would take sometime to learn. She became his pupil and studied for several years at his hermitage.

Milburga was riding her horse along the Edge, on her way from her Abbey to one of its daughter churches. She noticed that the shepherds and goatherds had gathered all the animals into the Apedale (on one side of the Edge), they seemed to be eating the pasture bare, while the Corvedale (on the other side) was growing green and plush.

The following month, she repeated her journey, and again the animals were being pastured in the Apedale, which by this time was almost grassless, while the Corvedale was even more verdant. She stopped her horse and asked the shepherds what they thought they were up to. They told her there was a snake in the Corvedale that wanted the valley for itself and bit them and their animals if they went into the pastureland. St. Milburga went and found the snake and, putting her hand down its throat, ripped out its bite. The shepherds were free to use the pasture and the flocks flocked to it.

The following month, she repeated her journey. This time the snake came up to her and told her how its life was being made a misery as the people and animals were taking their revenge. Milburga felt pity for the snake and, putting her hand down its throat, gave it a hiss. From that time onwards the snake could not harm people, but could frighten them into leaving it in peace.

If you want to find out about the history of stained glass, there’s no better place to look than at the website of the Stained Glass Museum. You will find lots of inspiration for your window there too.

You could also search images for “stained glass window templates free” and you will find lots of ideas on how to lay out the images you chose to use.

& more about the Challenge…

You can make your “window” however you like, with celophane, fabric, card, paper, recycled plastic bags and/or packaging – whatever materials you have to hand.

Accept the challenge and let your imagination and your creativity fly.