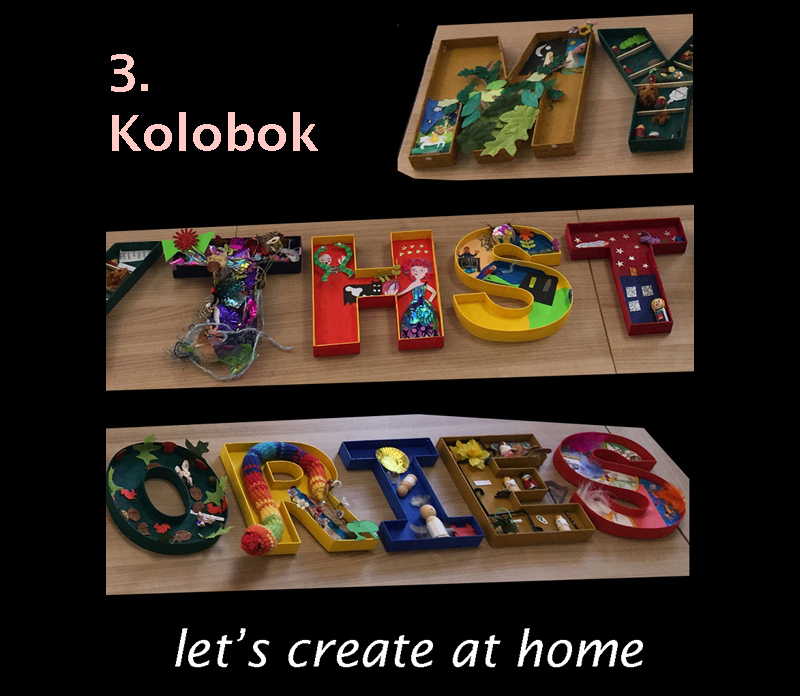 This challenge is for you to make Kolobok (Russian biscuits) and a background for them to roll down, and then retell the story with origami nested dolls depicting the characters.

3 different types of flour – buckwheat, wholemeal or rye and white plain or self-raising

Other bits to decorate as inspiration strikes

for the origami nested dolls:

7 sheets of A4 white paper

How to make Kolobok

Put 75 gms of each of the three flours (total 225gms flour) in a bowl with ½ teaspoon of baking powder. Mix together.

Rub in 100gms of butter (or 8 tablespoons sunflower oil) – it will be sticky.

Make a well in the centre and pour in 120g sour cream (or 115g single cream and ½ teaspoon lemon juice). Mix it all up. It will be very sticky!

Pull off small pieces and roll into balls. Put on greased or lined baking tray.

Using the tip of a spoon and your finger, make a mouth, spaces for eyes and pinch up a nose.

Some History & How to make the background

This is a Palekh painting of the story, by Alexei Orleansky who illustrated a book of Russian fairy tales. Use it as inspiration for your own background landscape for your kolobok to run around.

Palekh is the name of a small town in Russia, 190 miles north-east of Moscow.

People who lived there used to paint icons (pictures of saints or bible characters) on cypress-wood panels or on a papier-mâché base.

In the 1920s, after the Russian Revolution, all religion was banned. People in power encouraged ordinary people to tell folk-tales, play folk music, learn folk dances and generally think about Russian traditions rather than religion. So the Palekh artists could not sell icons. Instead they made papier-mâché boxes, trays and brooches and decorated these with images from folk-tales.

…and we also collected and displayed the nested dolls below…

How to make the origami nested dolls

You need a different-sized square of paper for each character:

The images below were posted on our Mythstories – Let’s Create at Home Facebook Group session on 10th June 2020, where we shared tasting notes on Kolobok too.

“Thank you for entertainment and lunch all rolled into one! Despite appearances they actually were very nice.”

“I have all sorts of ideas now! If we ever get out this year, and I do some storytelling, I will be telling this one!”

…and finally here’s a video of the completed challenge.