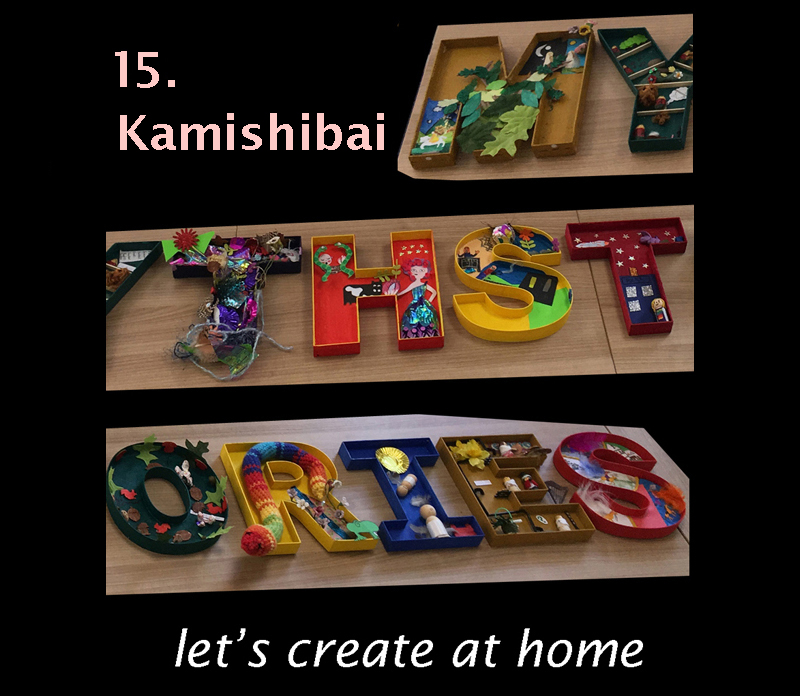 This challenge is for you to design and make a kamishibai (Japanese story box) to retell the story of the Welsh Fairytale “The House With The Front Door On The Back”.

Kamishibai is a box containing picture-slides to accompany the telling of an oral story. It is a Japanese artform that literally means ‘paper drama’. It can be used by groups or individually to tell the stories of their choice. There’s lots more information at https://mythstories.com/educational_resources/make-and-use-a-kamishibai/

What do you need?

How to make your Kamishibai

This is a good starting point for creating a top loading Kamishibai, traditional Japanese Kamishibais load the slides from one side rather than the top.

You can make your own modifications and make Kamishibai in whatever way you like. This picture shows how you can cut cardboard backing boards to stick the images on instead of using skewers.

Use your imagination and create something that is unique to you. As an example of what is truly possible here is a film (in Japanese) of our friends Spice Arthur 702 who have, quite literally, taken Kamishibai ‘out of the box’.

This is a house near where I live, but it doesn’t look like this now. This story shows how it changed.

This is farmer John Lloyd who lived in the house, a man of regular habits. He’s carrying his slops bucket down the front path to the front gate. He did this at the end of every day and the bucket would be full of potato peelings, tea leaves and all sorts of kitchen rubbish.

When he got to the gate he’d take one step to his left and throw the contents of the slop bucket over the wall.

But on this day he heard a high pitched voice shouting at him. He looked high and low, and when he looked low he saw a little man.

He picked the angry little man up to see and hear what he was saying.

“Will you stop throwing your rubbish over my house”, said the little man.

Farmer Lloyd said, “of course I will, but I’ve never seen your house”.

“That’s because you’re not seeing with my eyes. Put me down and stand on my foot then you’ll see with my eyes what’s on the other side of the wall.”

“But where can I throw my rubbish instead?”

“Ah, and then I can walk out of my new front door and down the back path and throw my rubbish over the back wall instead.”

“Yes!”, said the little man “and as a reward I’ll give you the best cows in the whole of Wales.”

So Farmer Lloyd blocked up his front door.

And put his new front door on the back of his house, he even painted it green like the little man’s front door.

And sure enough he was given the best cows in the whole of Wales.

That is why the house, and this story is called…

“The House With The Front Door On The Back“.