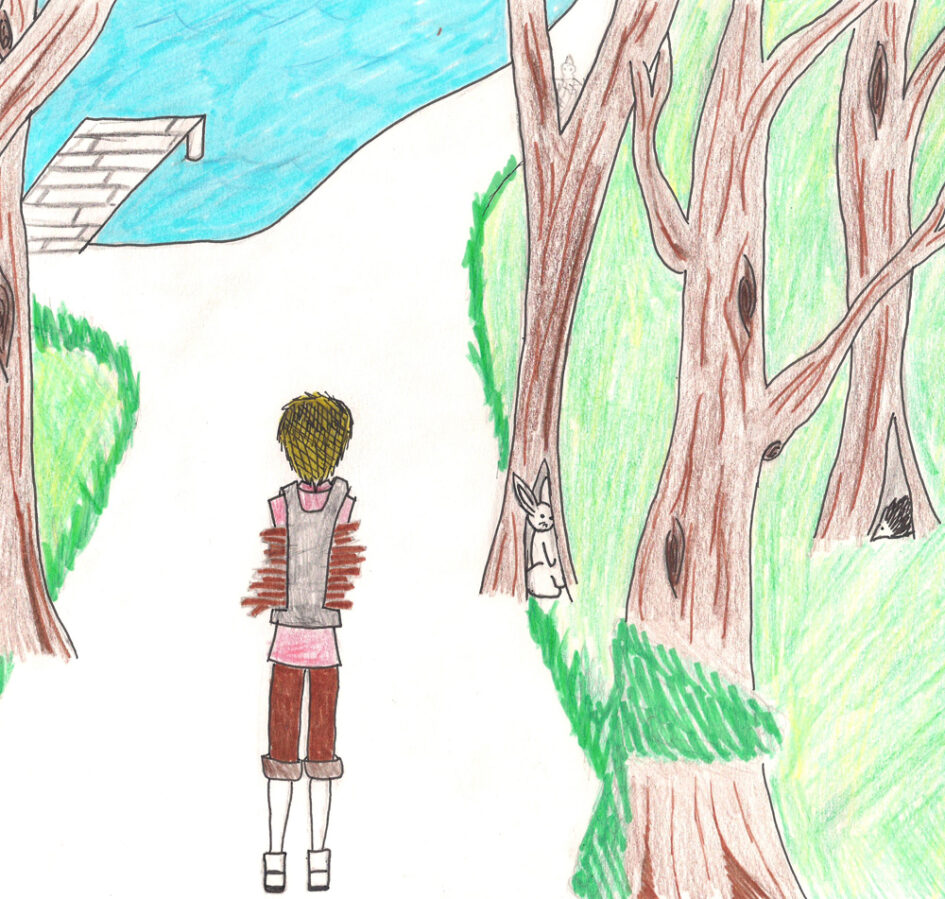 John was a hard working man.
Everyday he’d go into the woods,
collect sticks and sell them in town.
One day started like every other and he
went to get his sticks, but he heard a sound
…it was a little man!

He was jumping in pain, so John
calmed him down and lead him to a
clearing and shared his lunch.
“Half for you and half for me”, said John.
The little man thanked him and went on his
way, promising to help one day when needed.
John began his walk home.

All of a sudden, his footsteps were louder
and the trees trembled and shadows loomed.
John was face to toe with a giantess.
She wanted to eat him. John cried out,
“No! Instead I challenge you to a game
of hide and seek”.
She shut her eyes and began to count.

As soon as her eyes shut there was a !pop!
And there was the little man.
He sent a blast of magic towards the
tallest tree and it split so John could hide.
She reached zero, and with her axe she cut
down John’s tree. She began to count again.

Once again the man was there, and this time
John shrunk to the size of a thimble
to hide within the reeds. The giantess, however
could smell him, and with a mighty swing,
the reeds were gone, and John had one last chance.
The giantess shut her eyes.

John was now placed into a fish and
flung into the lake nearby.
But the giantess was one step ahead.
She began to sail after the fish in earnest.
And there was the man once more,
upon the giantess’ boat.

With a blast of magic, the boat is destroyed
and the giantess sinks to the bottom
of the lake, never to be seen again.
John is found and resized, and the little man
leads him to his reward – the giantess’ gold.

They approach some doors and see
worldly treasurers and the man offers John half.
He accepts it, but only gives it to people
in need or hardship.

After all, the best gift is
the gift of giving.

The grounds of Apley Manor with its wood, small pond, and lake surrounded by reeds, contain all the elements mentioned in this Scandinavian tale about a stick collector and his encounter with a giantess. The Wrekin hill, only a couple of miles away is associated with giants. So Megan followed in storytelling tradition by uprooting the story and planting it firmly in a new landscape which fitted it to perfection. And, in another nod to storytelling tradition, she has incorporated contemporary references in her drawings for the kamishibai slides. You can find out more about making and using kamishibai here.