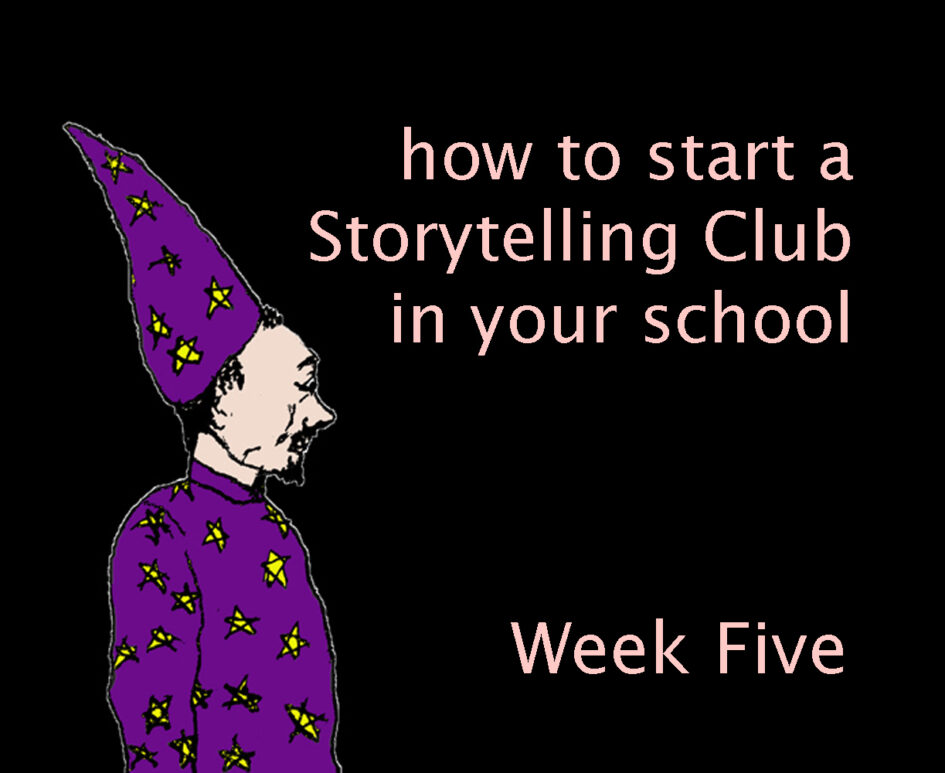 Repetition and Sequences are the lifeblood of traditional tales. Apart from anything else, the patterns they make help the teller retain and remember the story. They also help the audience follow the story, give them an opportunity to join in and anticipate what will happen next.

Repetition is so deeply embedded in the audience’s expectations that the storyteller can use this to their advantage to refocus the audience (or maybe raise a laugh) by changing the exact wording of one of the later repeats.

Repetition can also lead to sequences. Here you can encounter the mirror that becomes a lake, the comb that becomes a wood and the lump of salt that becomes a mountain when the hero and heroine throw these in the path of the pursuer.

In the example story of Mrs. Ellis the well overflows to become a pond, a lake and then a mere.

(2) Talk about where repetition and sequencing was used and see if you can identify any other opportunities for it. As this is a lengthy story, there is a summary outline below:

Now there is plenty of water in North of Shropshire, it wasn’t always so.

Mrs Ellis was a lucky woman with a spring in her garden
Tasted like your favourite flavour
Neighbours came round and were given a thimbleful.

Then came a sunny dry summer
Only spring left was Mrs Ellis’
Everybody wanted her water.

Thimblefuls are one thing, bucketfulls quite another
Mrs. Ellis wouldn’t share

Went upstairs and into the bedroom.
Water crept up to her bedroom – Lake
She didn’t change her mind

Down at the bottom of that deep, deep mere lives a little old lady, Mrs. Ellis. She lives there with her little spring, which filled that mighty mere which took her name, Ellis’s mere, or Ellesmere as we call it today.

(3) Get the group to retell the tale, putting in their own ideas for the repetitive and sequential phrases, or simply using the ones that the storyteller put in there.

Below is the outline of the Grimm’s story of The Elves & The Shoemaker. Like all Grimm’s stories, there are many versions.

Get the group to build this story using repetition, sequencing and – to reinforce the last session – incorporate some speech and dialogue, in the conversations between the Shoemaker and his wife.

Elves and the Shoemaker

A Shoemaker through ill-luck had become poor.
Should he buy leather, or food?
(Chance for discussion with wife, to build their individual characters)

He bought leather for one pair of shoes
Cut them out, left them on workbench to sew the next day and went to bed
In the morning found a pair of beautifully crafted shoes …
… and in came a buyer, who paid twice the normal price
So the shoemaker and his wife ate well

and he bought leather for two pairs of shoes
Cut them out, left them on workbench to sew the next day and went to bed
In the morning found two pairs of beautifully crafted shoes …
… and in came two buyers, who both paid twice the normal price
So the shoemaker and his wife ate well and ….

and he bought leather for four pairs of shoes
Cut them out, left them on workbench to sew the next day and went to bed
In the morning found four pairs of beautifully crafted shoes …
… and in came four buyers, who each paid twice the normal price
So the shoemaker and his wife ate well and … and …

and he bought leather for eight pairs of shoes
Cut them out, left them on workbench to sew the next day and went to bed

One evening, when he had become rich, shoemaker and wife decide to find out who has been helping them.
(chance for second discussion with wife, to reinforce their characters)

They hide in room and watch.
(this hiding happens again later, so create some phrases that can be repeated. Eg: creeping down the stairs, peeping through a hole in the door)

At midnight two elves come in – carrying hammer, nails, needle & thread – but they had no clothes on!

Next morning wife suggested she make the elves shirts, coats, vests and trousers and knit them some stockings/socks and the shoemaker makes them shoes.
(chance for third discussion)

Over the next few days they create masterpieces from the finest materials, wanting to show their gratitude.

One evening, do not leave out the cut leather, instead leave the clothes.

They hide and watch
(opportunity to repeat phrases from earlier hiding scene, with different emotions)

“Now we are boys so fine to see,
Why should we longer cobblers be?”
Elves leave, never to return
But the shoemaker’s fortunes have been restored and he and his wife live happily ever after.

Work on the repeat phrases

(1) Get the group to put each of the phrases:

…. And in any other combinations they will find fun.

Discuss how the man and his wife will be feeling in each situation, get the group to write down the words they want to use in each.

Then visualise the scene, concentrating on the spot the man and his wife will be hiding and their view of the workbench, and make sure the group shares the image – perhaps draw a group picture.

These sections ‘anchor’ the story and the group can now tell the tale, improvising the other parts.

You can build a pyramid with pictures or words on each face to manipulate as an aide memoire for the repeat phrases and patterns, when telling the story. This can be particularly helpful for young storytellers, who tend to be rather self-conscious. The pyramid gives them and their audience something to look at.