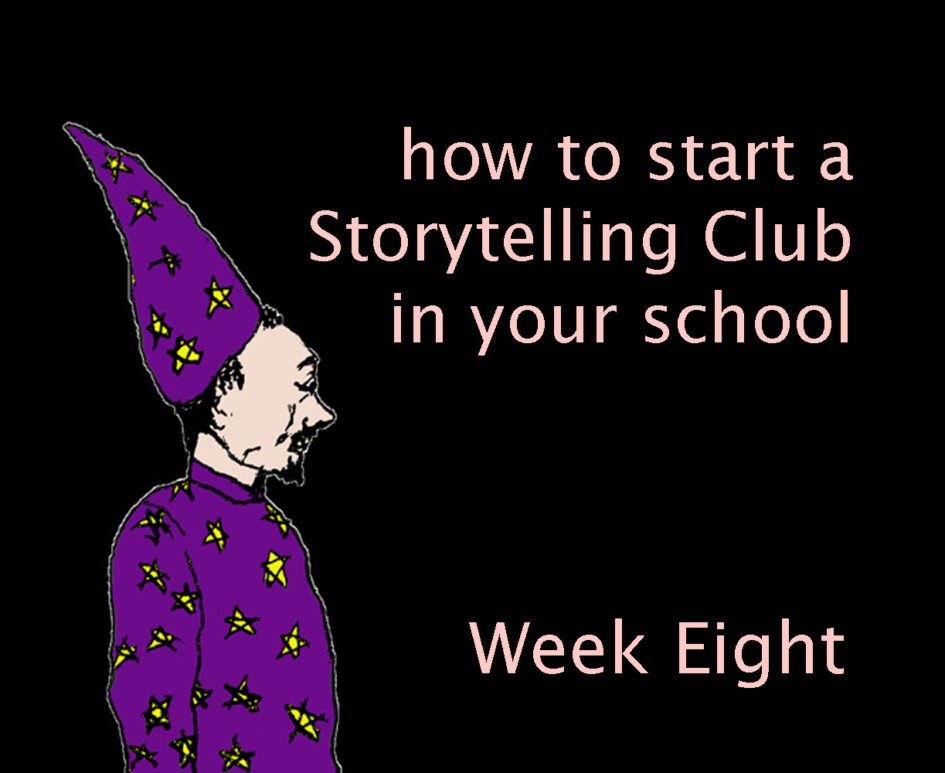 Stories can be told in many ways, what makes a great story is a great composition.

This segment looks at the four main composition components: description, narrative, speech and firework moments. It’s easier to look at the first three initially, and then add in the firework moments.

Description, whether it is of places or people, is given at a static point in the story. It keeps the audience with the storyteller, creating similar pictures in their mind to that in the mind of the teller. It gives them extra information about people, places and things.

Help your group generate description by:

Getting them to draw out the scenes so they can describe what they have drawn.

Using the sensation cards to remind them to include touch, taste, sound and smell as well as sight.

Narrative moves the story on; it is the motive force connecting the different parts with each other. Within narrative we include descriptions of what is happening, but not descriptions of the scene or the characters.

Speech sheds light on the characters involved, and the incidents that happen. ‘Speech’ can be dialogue between characters or the voicing of the internal musings of one of the characters.

Help your group generate believable and relevant speech by playing games like ‘Princess and Pauper’, and by ‘hot seating’ the stereotypes they find in the story they are working with.

Mapping the Composition of a Story

This is a graphic way of studying the composition of a story, by placing coloured paper shapes on a long roll of lining paper, or (as we used) flip-chart pages taped together.

The example below shows the current composition of a story ‘Queen of the Cats’ that has been in repertoire for about 10 years. Words change each time it is told, but the composition remains the same.

The map reads from left to right. ‘Queen of the Cats’ starts with a few one-off sections, but quickly develops into a series of repeated narrative/description/speech before ending with more one-off episodes.

Unlike a map, this is not to scale! The time taken by each piece of description, narrative or speech can be long or short. The lines beneath indicate when different characters come into and out of the story.

‘The Jester’ is a story told by Xanthe Gresham on her CD ‘Lands of Enchantment’ with Musician Sherry Robinson.

Make sure you have an hour to spare, and a lot of space, and try to map the story using the system described. Work from left to right along the paper.

As you go, split the story into its key scenes with a vertical line.
Along the bottom of the scroll draw a continuous line, adding a differently coloured line with their name written above for each character as they enter the story and ceasing the line when they exit.

Above that line position the coloured rectangles or triangles as appropriate.

Tip: Small interjections of speech (eg: ‘oh, no’) are easier to record as a little red arrow breaking into the main body of the narrative or description where they occur.

‘The Jester’ is a beautifully, and thoughtfully, composed piece, as you will both hear, and now, see.

This is what we made of the exercise – you may not get quite the same result, as, like storytelling, it is not an exact art. The map of ‘Queen of the Cats’ (above) was created by a group of teachers who just could not agree whether a couple of passages were ‘narrative’ or ‘description’, so they compromised by using a yellow-and-green striped rectangle.

You’ll also notice (below) an odd red shape – like a miniature explosion – which we used to denote when the storyteller dropped into vocal sound effects.

Working On A Story

This method can be useful when starting to work with a story.

Try mapping the outline of a well-known fairy tale like Hansel & Gretel. Get your group to tell the story as they know it, or read a version from a book.

(Yes, this is about oral storytelling, but all too often storytellers have to revert to books for much of their source material).

As the story progresses, discuss, agree and lay down the coloured shapes – remind everyone to look for repeats and use the triangles for these. Don’t stick the coloured shapes down on the paper as they will inevitably need to be rearranged as the group works on the story. A good tip here is to close all windows and have a ‘composition corner’ well away from draughts!

When you have finished, take a long look at the composition map. Have any patterns emerged?

Warning: written stories are very different in their composition from told stories, so patterns will be different from the ones shown in ‘The Jester’ above. For example, a told story includes much more repetition than a written tale.

Check again to see if you have missed any parts of the story that have incidents that repeat, either exactly or with slight, incremental, changes. Where can some repeats be usefully added to help give the story a more memorable shape when it is told, making it easier for the audience to relate to? Decide what these will be, and slot them in.

Look at the map of The Jester again and you will see what happens often in oral stories; description is more common at the beginning and in blocks as new characters or situations are introduced, but when the story really gets going the majority of the telling is patterns of narrative and speech.

So check the composition map again for description, narrative and speech. Is there a section of the story that needs more or less of these? If you have been working from a book there may even be places where you can completely jettison some of the description, as description features more heavily in written than oral work.

Firework Moments (the emotional highs of the story)

These are the nodal points of the story, the key points without which the story would not make sense.

They are also the times when the audience has a chance to feel what is happening, to empathise with the characters and to make connections with their own experiences. The ‘you’ve all been there’ moments when the hair stands up on the back of your neck or your flesh creeps or you are overcome with joy.

Firework moments will traditionally be found in the middle of a story (where things turn bad) and just before the end (when it’s obvious there will be a happily ever after). If your group find it difficult to decide which are the Firework moments, they probably aren’t as yet fully understanding the story. It can be useful for them to think of the story as a televised football match and the firework moments as those points in the game which demand an action replay and analysis from the expert commentators.

The firework moments will take up a disproportionally large amount of the telling time and include description, narrative and speech, and often a degree of re-iteration. After all, these are the moments the audience really must not miss. What if someone coughs, or is losing concentration? These moments need to be hammered home!

Your Firework moments should be visceral. They should appeal to all the senses of the audience and get them to empathise with the storyteller’s words.

Experiment with the scenario. Start off simply by having the incident occur in different weather conditions or at different times of day. Which gives the moment the most dramatic effect? It’s no co-incidence that horror scenes happen in the dark, in dingy weather, and joyful moments happen in bright sunlight – the weather and time of day amplify the mood.

Different storytellers will find different techniques suit their personal styles. This is the time to experiment and find the one that best suits the teller and the tale.