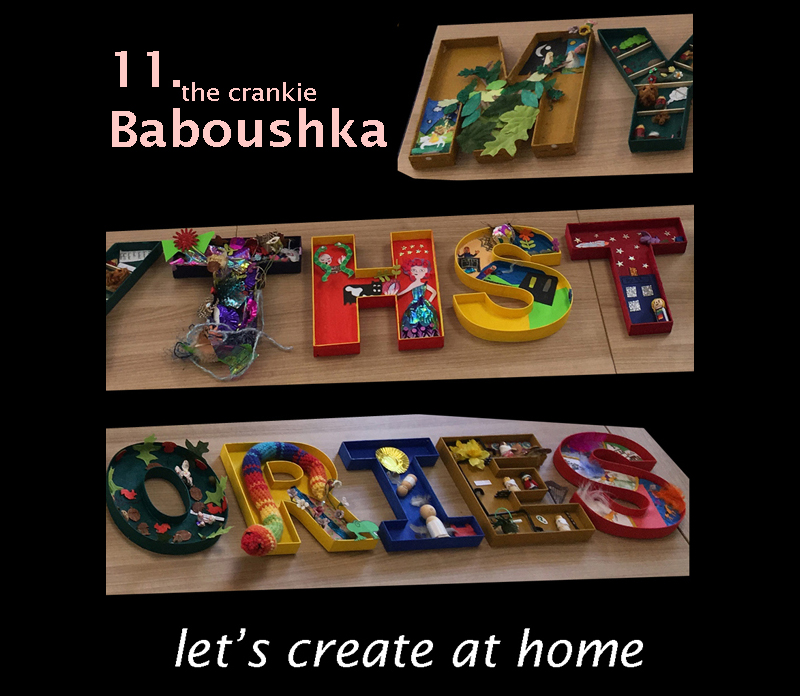 Spend as much or as little time on it as you’ve got to spare. It could keep all of the everyone busy over the next month.

This challenge is to make your own “Crankie” and use it to tell the story of Baboushka. You can really get carried away with it if you feel inclined. There is certainly a great deal of scope for creativity when making your Crankie, and when it is complete you can use it as an interactive Christmas decoration and, of course a story to tell on the cold dark nights of Winter while the Yule log burns in the grate.

So what is a Crankie?

“Crankies are an old storytelling art form. It’s a long illustrated scroll that is wound onto two spools. The spools are loaded into a box which has a viewing window. The scroll is hand-cranked while the story is told, a song is sung or a tune is played. If you haven’t seen one before, then a video is worth a thousand words.

The term crankie is being used now to name this very old art form. In the 19th Century, they were called moving panoramas (among many other names). They originated in Europe in the late 18th century.”

In the museum collection we have storyteller Helen East’s “Japanese” Crankie, but we’d also like you to see two pictures we recently received from Wendy Dacre of Raventales. Now there’s a spot of inspiration.

And when it comes to showing you ideas on how to make your crankie there is no better place to send you than to the “Make a Crankie!” page on the Crankie Factory website. You’ll also find many of those videos worth a thousand words on the site too.

Baboushka was an old Russian widow who lived in a remote country village. She was fabled for miles around for keeping the finest, cleanest home and cooking the most delicious breakfasts, so when travellers came looking for lodgings nobody hesitated but said, “Go to Baboushka” and they did and they all left happy and content with a full stomach. And after they left Baboushka would immediately whisk around the house removing every speck of dust and dirt, washing the bedclothes and linen and putting her house back to its pristine condition.

Now one day three very special visitors came to the district. Three fine men, richly dressed and carrying expensive-looking parcels. Everybody wanted to know who they were and what was their business. And as in any little village soon everyone knew exactly who they were and what their business was. These were three wise men, following a star to be present at the birth of the king of kings and bearing gifts for the baby.

Well, they needed somewhere to stay and, of course, only one place would be fit for such eminent visitors. You have guessed it; Baboushka would be their host for the night. After a pleasant evening meal and before a restful night’s sleep between crisp sheets they sat around the fire and told Baboushka of their mission. She had always been a stay-at-home kind of person, but this was no ordinary occasion and Baboushka was moved to join the kings on their journey. But she was an ordinary woman, nor rich, not wise. So long after the wise men had retired to their beds she sat thinking about how she could play her part and do her homage.

It was quite early in the morning that the idea came to her. In the attic she had her dolls still in nearly as good condition as when she had received them as a child. Maybe they could be a little dusty and require a spot of paint here and there and a shine with her magic cleaning fluid, but they would be an ideal present for a baby. ‘Every baby, no matter how grand their birth, loves dolls’ she thought and she set off to the top of the house to find them.

There in a trunk she found the nest of dolls. She tenderly took them in her hands and examined them with a critical eye. Yes, there was work to be done on them, but first she must prepare the breakfasts for the wise men. She had her reputation to keep and that cost time and care. The restoration of the dolls could come later and, if the men left, well … she could follow later and catch up with them on their long journey.

After breakfast the three wise men left, leaving many thanks and a good generous quantity of coinage on their bedside tables. Baboushka set about cleaning the dolls. She did a fine job. You or I might have said “well, that is fair enough” but “fair enough” was not anything Baboushka would accept. After many an hour had been lavished on those toys they were fine beyond belief, a gift fit for the king of kings.

Baboushka went to collect her coat and outdoor shoes. But she remembered three unmade beds, dust on the hearth rug, a fire grate to clean and all those other tasks necessary to keep the neatest home in the countryside of Russia. It surely would be letting her standards drop if she left without tidying her house and doing her chores? And she would surely catch up with those wise men on their long journey.

When everything was done and the house was clean as a new pin, Baboushka set off. She followed the fading star ahead of her, but she was far behind and had a lot of time to make up.

She scurried and hurried, always following the traces of those men and the light of the now-faint star. But no matter how she exerted herself she was unable to catch up with them.

Finally, after many a day of anxiety, she found her way into a little stable in Bethlehem, deserted bar a few beasts chewing at the yellowing hay. After many a question she was told the baby was long gone, with his parents on his way to Egypt. Off she went on their trail and, you know, people they tell me she is following them still.

Make your Crankie with whatever materials you have to hand, let your imagination run riot.

…and here’s some examples of the beautiful and inventive results you could acheive when you accept the challenge.

Accept the challenge and let your imagination and your creativity fly.