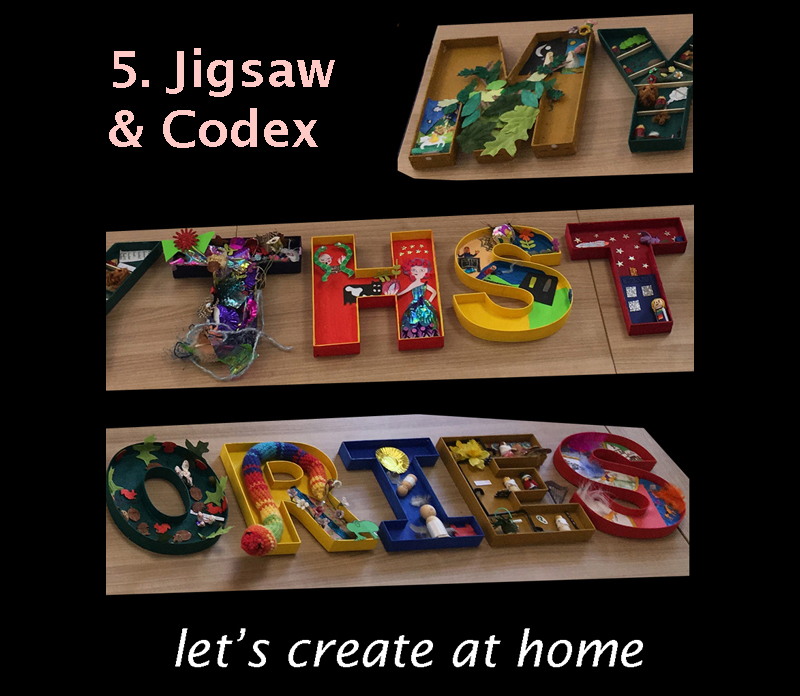 This challenge is for you to make a jigsaw and a codex based on the Aztec story of Coyolxauhqui.

A cardboard box
A piece of paper (for your story plan)
Pencils, pens or paints and crayons
A ruler
Strong tape (parcel or gaffer tape is ideal)
Double-sided sticky tape or glue
A pair of scissors

Here’s an audio version of the story:

This is the museum jigsaw of Coyolxauhqui

It was donated to us by Lucy, who used to be a sign language interpreter at Mexico City museum.

It is an illustration of a giant stone plaque unearthed in construction work in Mexico City in 1978. The discovery led to the excavation of the Templo Mayor. The 3.25 metres in diameter stone was found at the foot of the South stair of the fourth rebuilding of the temple, which dates it between 1469 and 1481.

The stone plaque shows how the pieces of Coyolxauhqui were reassembled by Huitzilopochtli into a disc.

Here’s a photograph of a stone head of Coyolxauhqui on the right.

It was made around 1500AD and is now in the National Museum of Anthropology in Mexico City.

The jigsaw we will be making will show the end of the story – Coyolxauhqui reassembled as a disc in the sky, followed by Huitzilopochtli and surrounded by their 400 brothers.

Cut out the two biggest sides of the box. (Keep the rest of the box – you will need it for the codex).

One side will be the baseplate. The other top plate will house the Coyolxauhqui jigsaw, the Huitzilopochtli disc and be decorated with the 400 brothers.

Draw two circles on the top plate – we used a pot lid to draw around.

Cut these out; cutting in along one of the groves of the corrugated card and then around the circle.

Then stick the top plate and the base plate together, to leave spaces where you cut out the circles.

Decorate the jigsaw frame with 400 stars. Don’t worry if you draw more than 400 – after all the brothers were cut into mincemeat. And that is why there are more than 400 stars in the sky.

On the right is a photograph of the Coyolxauhqui Stone.

Do your own version of it to fill one of the circles. Remember she has been ripped into 11 pieces so you will have to fill the circle with the top half of her body, the ‘bottom’ half of her body, her head, two arms, two legs, two feet and two hands with silver bells all over her. But its not like drawing an articulated body, you just need to fit all of those body parts onto the circle somehow.

When you have finished the drawing, cut it up into the eleven separate pieces.

Now try reassembling it into its gap on the jigsaw frame.

Below are some pictures of Huitzilopochtli which date from the 15th Century AD. One of them shows him in his human form, three show him as a god and the last shows the Aztec Emperor Chimalpopoca in a Huitzilapochtli costume.

Huitzilopochtli literally means ‘Blue Hummingbird’, but in the story he is wearing golden armour and carrying ‘all the unimaginable weapons you can think of’! As you can see from the pictures, Aztec’s thought snakes were those kind of weapons.

Fill the second circle with Huitzilopochtli with all his weapons of war, running towards his sister. To follow the story, you don’t need to cut this one to pieces, but that is up to you.

Put your completed Huitzilopochtli into its gap on the jigsaw frame.

So what is a Codex?

Codex is a Latin word meaning a volume of manuscripts of an ancient text. The plural for codex is codices.

Aztec Codices are very rare and precious documents, folded books with picture images that catalogued the Aztec’s beliefs, their way of life, and their calendar system. Aztecs didn’t have an alphabet so they recorded information with pictures.

When the Spanish invaded Mexico they found great libraries of Codices, The Spanish conquerors were devout Catholics and thought the codices were ungodly so destroyed all they found.

Later they realised that a wealth of knowledge was contained in each codex and they made surviving Aztec artists make new versions. These reproduction codices had explanatory notes added to them by Spanish priests.

The first picture is a copy of the Codex Laud screenfold book, the original which is in the Bodleian Library, Oxford is thought to be pre-Spanish invasion, as there are no words only pictures and symbols on it.

The second picture shows page 13 of the Codex Borbonicus, an Aztec calendar. Historians are not sure quite how old this Codex is. It has notes, but is it a reproduction Codex or were the notes added to an earlier document by Spanish priests?

First plan out the pictures that tell Coyolxauhqui’s story.

Once you know how many pictures you need, then you can work out how many pages of cardboard to cut. The Codex above has two scenes on each page (you only draw on one side of each cardboard page).

So back to what remains of that cardboard box.

Fold the flaps back over the side of the box, draw round then and the cut along the line.

You will end up with pairs of pages.

Stick the pairs together with strong tape on the back.

Don’t worry if the cardboard is a bit tattered, it will make the Codex look ancient.

Your Codex is now ready for its pictures.

You’ve seen images of Coyolxauhqui and Huitzilopochtli. Above are two statues of their mother, Coatlicue, the Mother of the Gods from the National Museum of Anthropology in Mexico City.

You will have to imagine what Coyolxauhqui’s original 400 brothers looked like, but they ended up as stars.

The images below were posted on our Mythstories – Let’s Create at Home Facebook Group session on 8th July 2020. The session was four hours long, including a picnic lunch, but no-one managed to complete their codex in that time and so finished the task the next day.