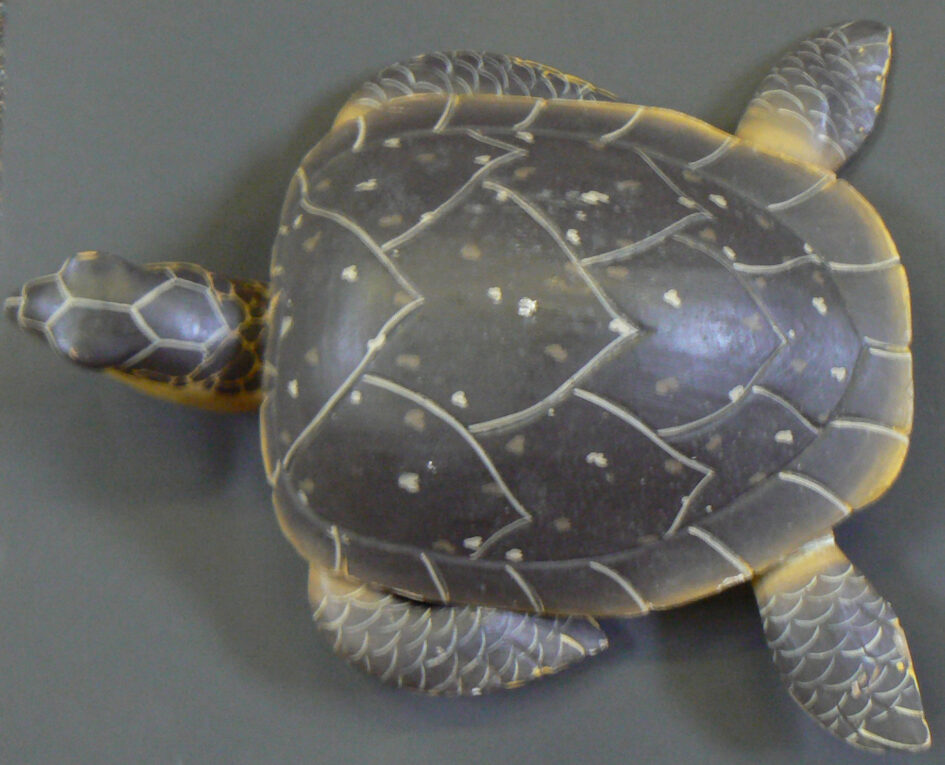 This wooden riverturtle might seem a very unusual storytelling artefact as, in itself it justs portrays a riverturtle rather than tells a story. However Mythstories was pleased to number it among its exhibits because of the its provenance as part of the storytelling revival in England.

In the 1980’s oral storytelling as a performance artform began a resurgence in England and was quickly seized upon by advisory teachers and school leaders as a key tool in delivering the new agenda for multi-ethnic cultural education. Consequently those early pioneering performance tellers were often asked into schools to tell tales from other lands and cultural traditions.

A prop could save an awful lot of explaining to young pupils who had little idea what a riverturtle looked like. That was why storyteller Fiona Collins jumped at the chance of acquiring this marvellous wooden model and using it extensively while telling the traditional Native American story “Riverturtle is not singing” in schools.

Fiona’s written version below appeared in a 1990’s Nelson reading scheme book. Enjoy the read while you picture this Riverturtle.

When children are small, their parents tell them things to keep them safe. They say things like: “Don’t go in the road. Don’t talk to strangers. Don’t put your fingers in the electric sockets.”

Did your parents say things like this to you when you were little?

Because turtles can live in the water and on the land, but if they go too far from the water, their skin will get dry, their shells will get cracked, their throats will be dry, and they might even die.

But this is the story of a Riverturtle who forgot to listen to what his parents told him!

At last he did stop singing and thinking, and he looked around him. All he could see was the hot desert sand. And when he looked up the burning sun was high in the sky and it was beating down on him. His skin was dry, and his shell felt cracked, and his throat was dry and sore. And when he looked for the river, it was so far away that it just looked like a little blue ribbon away behind him. He was afraid. He might even die!

He didn’t know what to do. Then he saw a little hole under some rocks.

“I’ll go in there to get out of the hot sun,” he thought. So he crawled under the rocks. Then he looked out. All he could see was the hot desert sand. How was he going to get home? He was so frightened that he began to cry. Two big turtle tears splashed on to his little turtle feet. When he saw that, he cried more and more. He was crying and crying in the little hole in the rocks.

And while he was crying and crying, who came walking across the desert? It was Coyote, the clever one, the trickster one. And he stopped and listened to the sound.

“Who is singing that lovely song?” asked the Coyote. “I want to learn that song.”

He came to the little hole under the rocks where the Riverturtle was crying.

But the Riverturtle said: “I’m not singing, I’m crying.”

Coyote said: “If you don’t teach me the song that you’re singing, I’ll poke my long nose into your hole, and I’ll get hold of you with my sharp teeth, and I’ll pull you out and throw you onto the hot desert sand to die!”

So the Riverturtle said: “I don’t care if you poke your long nose into my hole, and get hold of me with your sharp teeth, and pull me out and throw me onto the hot desert sand to die, I’m not singing, I’m crying!”

Then Coyote said: “If you don’t teach me the song that you’re singing, I’ll poke my long nose into your hole, and I’ll get hold of you with my sharp teeth, and I’ll pull you out and throw you into the cactus so all the prickles will go in your bottom!”

So the Riverturtle said: “I don’t care if you poke your long nose into my hole, and get hold of me with your sharp teeth, and pull me out and throw me into the cactus so all the prickles go in my bottom, I’m not singing, I’m crying!”

Then Coyote said: “If you don’t teach me the song that you’re singing, I’ll poke my long nose into your hole, and I’ll get hold of you with my sharp teeth, and I’ll pull you out and I’ll run with you down to the river and I’ll throw you into the water to drown!”

And the Riverturtle said: “Oh, please, please don’t throw me into the river to drown!”

So he poked his long nose into the hole, and he got hold of the Riverturtle with his sharp teeth, and he pulled him out and he carried him in his mouth and he ran with him –

until he came to the side of the river. And then he put back his head and he thre-e-e-ew that Riverturtle into the air. And the Riverturtle flew up in the air and down with a big splash! into the river. As he sank down below the water, the cool fresh water soothed his dry skin. And it washed away the cracks in his shell. And he drank and drank until his throat wasn’t dry any more.

Then he swam back to the top and popped his head out of the water. Coyote was still sitting on the riverbank.

“Thank you, Mr. Coyote, for bringing me home,” called the Riverturtle. “And, by the way, I wasn’t singing. I was crying!”

But Coyote was left sitting on the riverbank.

And do you! know, even today, Coyote still has not learned to sing. He can only howl! Ow-ow-ow-ooooow!

Snip, snap, snout, the story is out.