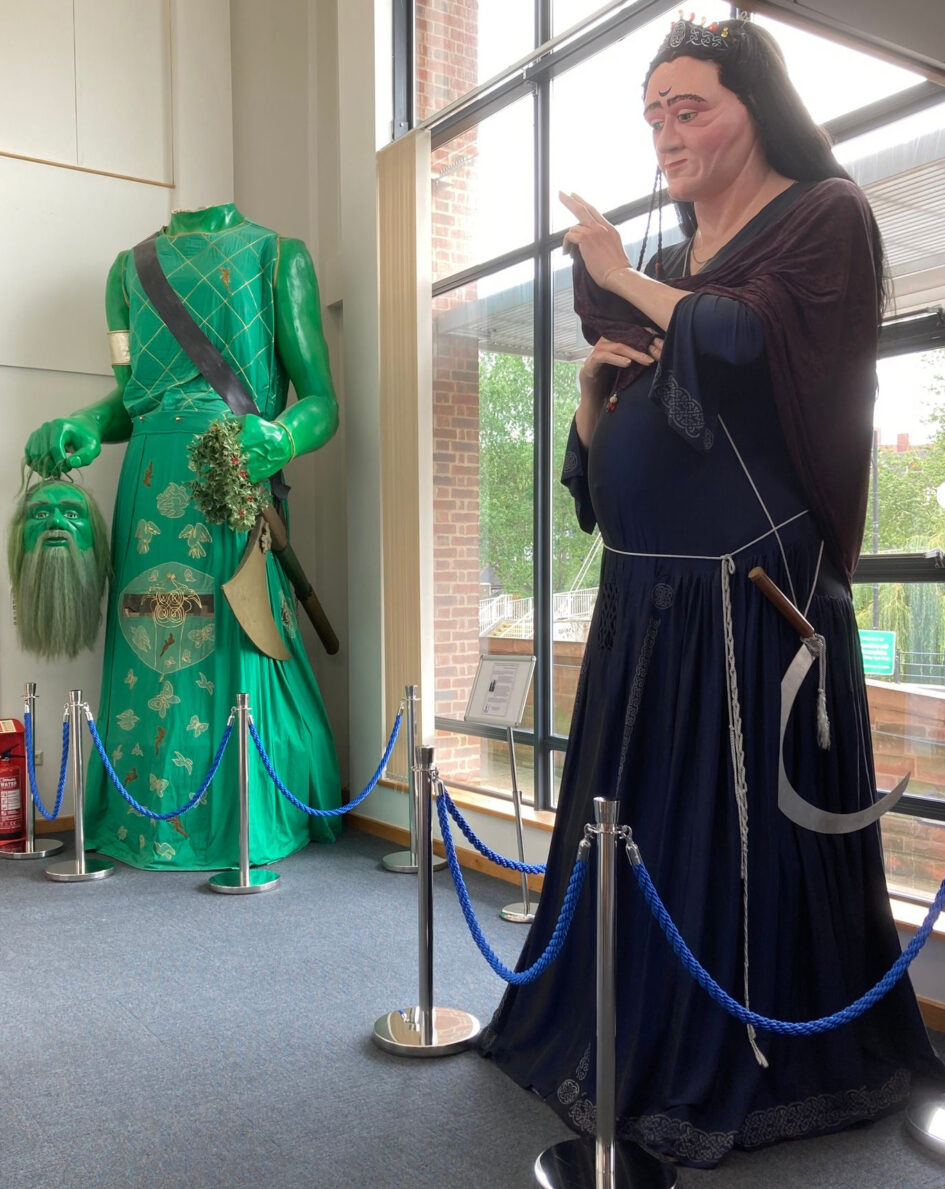 The processional giants Bertilak & Morgan on display at Mythstories, University Centre Shrewsbury in 2022

Processional or Dancing Giants are an age old tradition throughout Europe and elsewhere around the World. The actualise and personify Saints and Gods etc giving them a larger than human presence in festivals and street events convincing the populace of the veracity of their stories.

The tradition of Dancing Giants died out in Britain with the Reformation in the days of King Henry VIII. So Bertilak and Morgan are members of the first family of Giants built in the UK for hundreds of years. They were built by the “Graund Order Of Guisers” in the 1990’s made from fibreglass and mounted on frames made from steel, aluminium and wood.

They were housed by Mythstories from 2008 until 2022 aiding storytellers telling their story of ‘Gawaine and the Green Knight‘ from Arthurian legend.

Prior to their stay at Mythstories Bertilak & Morgan (aka Morgan Le Fey) had been paraded by the “Graund Order Of Guisers” all over Europe. They are now in retirement at Les Maison Des Geants in Ath, Belgium.

Bertilak, The Green Knight, first walked in the Giant Parade that formed part of the opening ceremonies for the Barcelona Olympics in 1992. Two people walked him on that occasion, but found him so heavy that after the event his frame was modified to fit a team of three.

He accompanied the then Secretary of State for Transport Malcolm Rifkind on his mission to mark first contact between the French and English at the completion of the Channel Tunnel but was too tall to enter the tunnel itself. In the photo Dave Lobb, Bertilak’s progenitor, raises a giant glass of champagne in a toast.

Morgan Le Fey, also called Morgan, is younger than Bertilak, and lighter too. By the time she was made “GOG” members realised the need for a ‘one-person’ giant for their family.

Morgan is the half-sister of the legendary King Arthur and features in many Arthurian stories, she is portrayed as eternally pregnant with Mordred. She is not just one of the Royal Family, but also a pagan priestess, deeply mistrustful of the new religion, Christianity, which is spreading through Arthur’s Kingdom. Morgan carries a silver sickle, to cut mistletoe at midnight so it retains its magical properties. On her forehead you will see a crescent moon, a symbol of her faith. In her bag she carries herbs, a comb and giant kilt pins, to hold up her skirts when crossing muddy fields.

They had a ‘big brother’ – Gogmagog made by the “Graund Order of Guisers” in the 1980’s. Unfortunately much of this giant was destroyed when one of the vehicles his disassembled body was transported in was stolen and set on fire. Now only his sword remains; displayed with the Mythstories Collection until 2022 and now alongside Bertilak and Morgan at Les Maison Des Geants in Ath.