A constellation of exhibits on Wild Edric 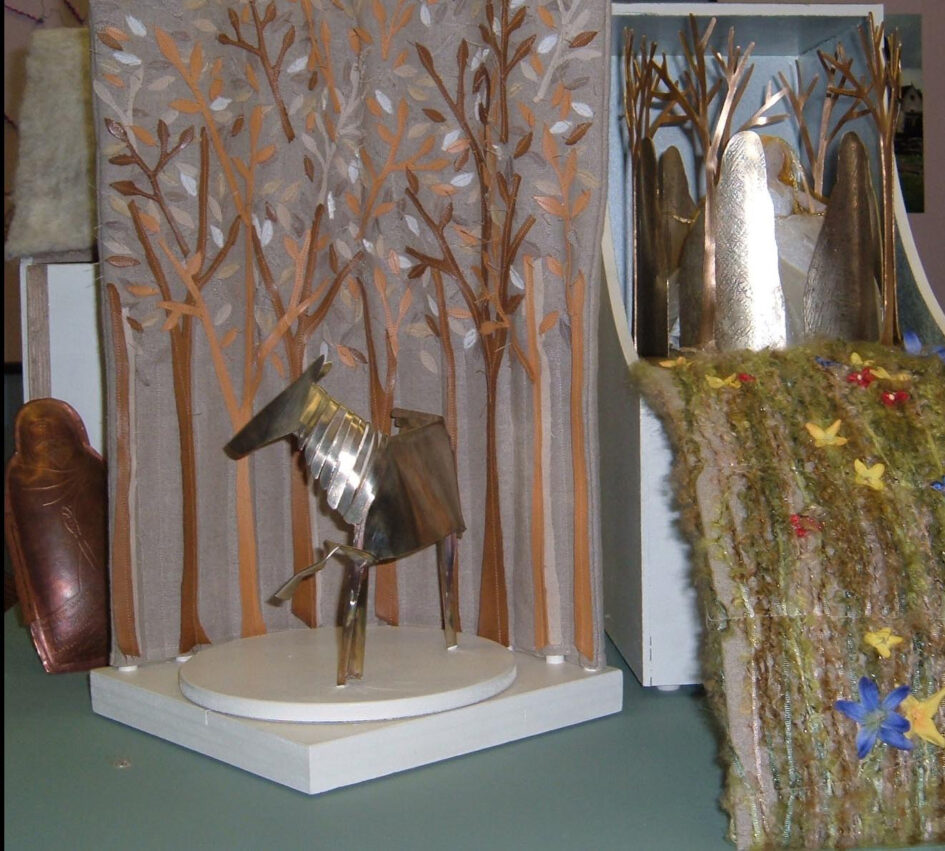 The story of Edric & Godda is a mix of legend and fairy tale very firmly rooted in the Stiperstones area of South Shropshire. The hero is a Saxon warlord, Edric, who still to this day protects his people.

The enduring tale is central to the understanding of this type of legend which remains in the public consciousness and still seems to have a resonance not only with the place but also with the inhabitants; it forms part of their identity.

Photographer Rachel Hicken created five early digital portraits of people from the Stiperstones area who each have their own unique experiences of the legend of Wild Edric.

The exhibit also included a photograph album of some of Rachel’s ‘native’ exhibition prints and of other residents who had personal stories of Wild Edric to tell. Rachel also recorded some of these local people talking about Wild Edric for the digital display of the project. Three recordings are available at the foot of the Wild Edric story-page here https://mythstories.com/stories/edric-and-the-stiperstones/

Fellow young photographer Nat Davies curated a photo shoot to tell his personal take on the tale of Edric meeting and loosing his fairy-bride in a modern setting. In the style of a photo-story teen-romance with no happy ending it is featured below…

The series of ten photographs was displayed alongside Godda’s dress complete with its migrating fairy lights designed by Jo Bloodworth together with her process diary to share her creative thinking and design praxis with visitors.

The other output from the “Edric Still Rides” project on display in this constellation of exhibits was a book of work by poets Dave Bingham and Kevin Bamford. The book contained 2 cycles of poems giving voice to characters in the legend of Wild Edric of the Stiperstones.

The first cycle, “Precious Stone Base Metal” was written in 1999 and gave the characters modern voice as their story unfolded in the 11th Century. The second cycle, “Edric Still Rides” was commissioned in 2000 by Mythstories to give voice to the ghosts of the story which are still present in the area of the Stiperstones to this day. These feature elsewhere on this website at https://mythstories.com/stories/precious-stone-base-metal-edric-still-rides/

In 2008 Mythstories were enabled by another Arts Council England Grant to commission the creation of a “storyscape” for display in the museum completing the constellation. It was a collaborative venture led by artist and jeweller Louise Frances Evans working with International storyteller Xanthe Gresham aided by friends of the museum Dawn & Lydia Powell.

The ‘storyscape’ brief was complex in that the final artwork needed to be first used in a 30 minute premiere storytelling performance by Xanthe Gresham held at Mythstories museum in Wem.

It was then installed as an interactive exhibit in the museum which could be explored by visitors while listening to an 10 minute audio recording of Xanthe telling the tale.

Alternatively it was used by the curators telling the story while visitors manipulated the artefacts.

The storyscape is now with The Titterstone Clee Heritage Trust.

Elsewhere on this website you can watch a video showing views of the Stiperstones while storyteller Amy Douglas regales some of the many stories of Wild Edric. https://mythstories.com/stories/wise-words-in-wild-places-3-stiperstones/