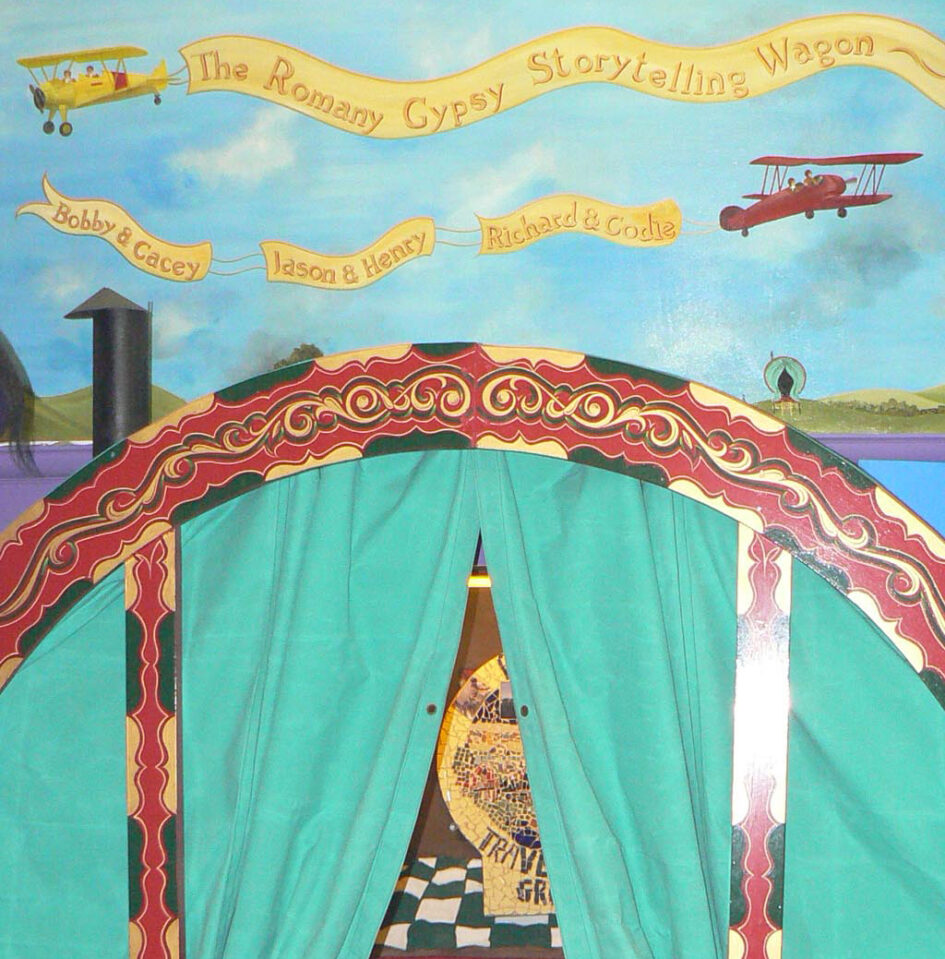 The wagon made a wonderful, cosy spot for telling visitors stories in Mythstories’ years at the Morgan Library in Wem.

The Traveller people in Britain are among the last true carriers of the oral heritage learnt from the tip of the tongue transmitted directly to the ear. While in Scotland their role is recognized, in England that is yet to be the case.

The wagon was created in 2007 in a project led by six traveller teenagers who were pupils at Adams Grammar School in Wem : Richard, Codie, Bobbie, Cacey, Jason and Henry. For them it was an opportunity to tell the story of their own heritage and celebrate their culture.

The young people, with the help of The West Midlands Education Service for Travelling Children, wrote a successful bid to the Local Network Fund that paid for artists Tom and Una from Illuminations Media to help them turn the fireplace in the museum’s old home, the Morgan Library in Wem, into the storytelling wagon. They also brought in musician / storyteller Dave Arthur who shared traditional gypsy tales he had learnt from families of Kent travellers and taught the girls how to dance over the broom and the boys some traveller melodies.

Artist Maggie Roberts and her daughter Jasmine, showed the teenagers how to decorate the front of the bow-top wagon in the traditional way and created the sign above the exhibit. The stool decorated with horses’ heads is also Maggie’s work. Other items for the interior wagon were collected by the teenagers.

During “The Romany Gypsy Storytelling Wagon” project the West Midlands Traveller Liaison Service discovered some reels of Super 8 film in their offices containing this archive footage of traveller life in Shropshire and the Welsh Borderlands. It was transfered to digital and formed part of the display inside the wagon.

In 2009/10 Henry and Cacey returned to the museum with Sylvester, John and Charleen from the Prees Heath Traveller site and Jamie Nadine, Sherel and Alisha from Park Hall Traveller site near Oswestry. The group made the special boxes that slid under the wagon settles and filled them with memorabilia relating to a relative who had lived and travelled in a bow-top wagon. This project ‘Life In A Box’ was funded by the Heritage Lottery Fund. The teenagers worked with wagon-maker Elijah who taught them the woodworking skills they needed and Maggie returned to supervise the painting.

Elijah also demonstrated how to make the traditional traveller crocket-baskets, wooden and paper flowers that can be found among the items in the boxes. The group visited Shropshire Archives to research the lives of their ancestors and recorded a short life-story of each of the four chosen people.

Your task is to match the life-stories to the boxes (answers are in the accordion at the foot of this post).