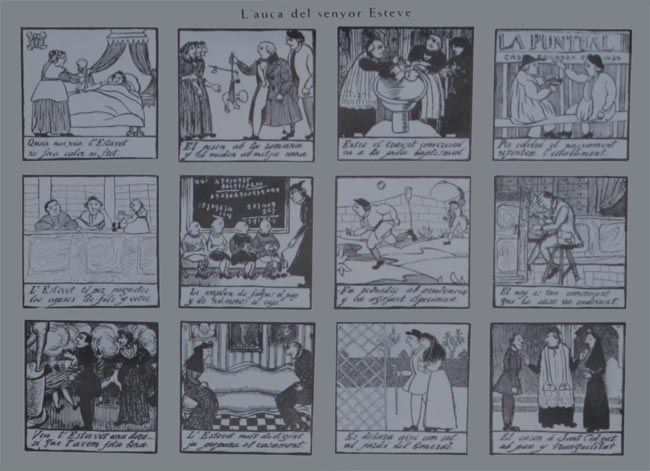 Auca is a Catalan artistic tradition dating back to the 17th Century. Early Aucas displayed pictures with rhyming couplets beneath on a single sheet of paper in groups of four with the page usually featuring a total of 24 or 48 illustrations. The tradition evolved into decorated ceramic tiles each with a picture above a rhyming couplet, many of these can be seen on street walls in Barcelona. The tiles are usually laid out in three rows of nine in a rectangular ceramic frame, now a total of 27 tableaux.

Mythstories was introduced to the tradition when Clive Booth, a maker of ingenious ‘tellers’, from Barcelona, donated two prints of L’Auca de Senyor Esteve to the museum. It shows 24 scenes in blocks of four and the story it depicts is based on a 1907 novel which later evolved into a 1917 play, and describes the co-dependency and conflicts of the income-generating classes of North Eastern Spain and the region’s flourishing artistic movement, through the life of one man. Tiled versions of this same tale in Barcelona feature 27 illustrations rather than just these 24.

In 2019 Mythstories commissioned cartoonist Graham Higgins to produce 27 illustrations for 27 quatrains from Michael Rosen‘s “Fouke le fitz waryn”. These cartoons and quatrains were merged together into Mythstories‘ take on the auca and printed on a banner which was displayed in the new iteration of Mythstories museum at University Centre Shrewsbury.

The quatrains beneath the cartoons were composed by Michael Rosen in 2003. They are part of a poem commissioned by Mythstories, also funded by Arts Council England, based on a traditional romance written in Old French prose. This ballad was written in the mid-13th Century, shortly after the death of Fouke le fitz waryn III and details his life’s exploits which, as well as Robin Hood’s adventures, also includes killing dragons, rescuing princesses, fighting pirates and finding the Holy Grail. The remnants of the original ballad are held in the British Library.

The complete poem was performed by Michael Rosen at Whittington Castle in 2003.

The Banner can now be seen on display at Whittington Castle, in North Shropshire.