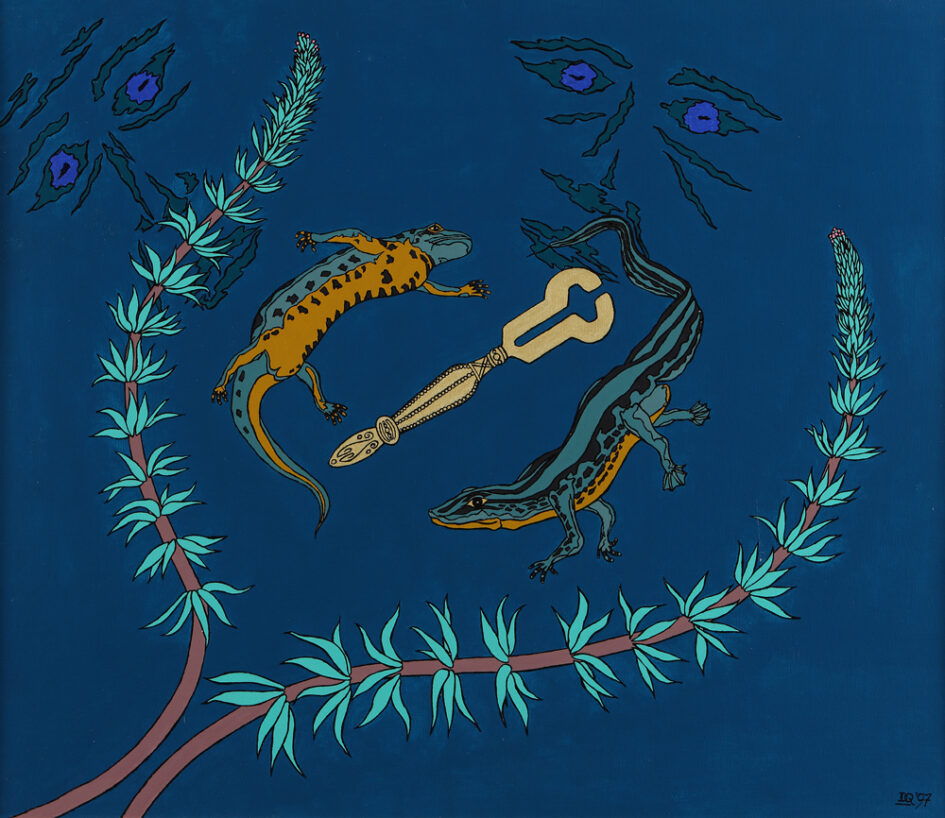 These 9 acrylic paintings by Dez Quarréll were created from 1995 to 1997 and were toured around 5 Shropshire tourist sites in the “Shropshire Myths” exhibition from 15th July to 2nd November 1997.

The paintings were accompanied by Dez’s written versions of the tales, photographs of the story sites by Gordon Dickins and a soundtrack called “Myth-Ology” written and performed by musician Tony Watts.

The exhibition set-up varied at each venue to respect the space and theme in with the attraction’s focus. It was while the exhibition was at Acton Scott Historic Working Farm that the idea of Mythstories museum was formed by Dez & Ali Quarréll. The exhibition was shown alongside interactive exhibits such as ‘construct a cart wheel’ etc. and the marriage of paintings with handling artefacts worked really well to engage and entertain all the family visitors.

The paintings formed a key part of the settlement to the Mythstories Charity and were the core of the Shropshire Gallery and its constellation of exhibits.

Each of the paintings has it’s own dedicated page on this website complete with a written and read story in English, background facts, Key Stage 2 Activities, a karaoke sing along song and French translations of the story and background facts.

For the featured painting “The Treasure of Stokesay” click https://mythstories.com/stories/the-treasure-of-stokesay/

The other stories and page links (from left to right in the image above) are:-

“The Giant and the Cobbler” https://mythstories.com/stories/the-giant-and-the-cobbler/

“Lost in the Flood” https://mythstories.com/stories/lost-in-the-flood/

“And The Water Gushed Forth” https://mythstories.com/stories/and-the-water-gushed-forth/

These nine webpages were the nucleus of the educational website mythstories.com which was, in 1999, a founder site of the British Government’s educational portal, ‘The National Grid for Learning”. It was the recommended site for Literacy in Primary Schools.

These 9 paintings are now displayed as part of the Mount Pleasant Primary School ‘mini-museum’ in Shrewsbury.