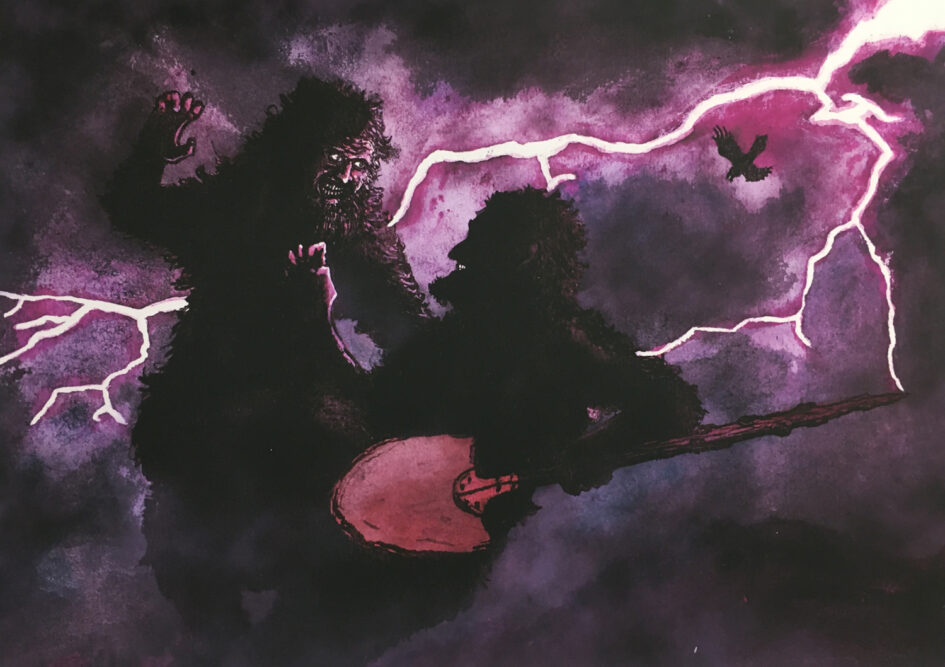 Artist Joseph Scrobb came to our attention back in 2014 when he visited Mythstories and offered his services as a volunteer; an offer that we were very pleased to make the most of. Joseph joined us a key volunteer with the Away With Words Storytelling Club which we ran weekly at Wellington Library for teenagers interested in becoming storytellers. Joseph’s fascination with local mythology and his artistic skills became invaluable to the success of the club and after he left to pursue his Master of Arts course at Aberystwyth we kept closely in touch and were lucky enough to use his skills on several projects, notably he produced an artistic sketchbook evaluation for our Arts Council England Lottery Funded Project “Wise Words in Wild Places”, see more here https://mythstories.com/stories/wise-words-in-wild-places-joseph-scrobbs-sketchbook/.

A legend recorded by Geoffrey of Monmouth in the 12th Century, and later celebrated in John Milton‘s masque Comus first presented at Ludlow Castle in 1634.

She, guiltless damsel, flying the mad pursuit
Of her enraged stepdame Guendolen,
Commended her fair innocence to the flood
That stayed her flight with his cross-flowing course.
The water-nymphs, that in the bottom played,
Held up their pearled wrists, and took her in,
Bearing her straight to aged Nereus’ hall;
Who, piteous of her woes, reared her lank head,
And gave her to his daughters to imbathe
In nectared lavers strewed with asphodel,
And through the porch and inlet of every sense
Dropped in ambrosial oils, till she revived,
And underwent a quick immortal change,
Made Goddess of the river

Elsewhere on this website you can find the Welsh of this story, in Wales Sabrina is known as Hafren https://mythstories.com/stories/hafren-hafren/

There is a video telling of another Shropshire Sabrina story by Amy Douglas elsewhere on the site at https://mythstories.com/stories/wise-words-in-wild-places-9-haughmond-hill/

“the story of The Evil Eye”

This man, whose name it is thought better to suppress, was a farmer at Child’s Ercall, in North East Salop about a generation ago. He was noted for ‘having the evil eye’ and for ‘having dealings with the devil’. He could, it was believed, make people who displeased him go in a direction exactly contrary to that they themselves wished or intended...

It seems to have been supposed that he acquired his supernatural powers by absolute hand-to-hand combats with the Prince of Darkness. It was said that persons walking about the lanes at night not infrequently heard scuffling sounds as of two strong men wrestling together, after which they were sure presently to meet the man with the evil eye, with his clothes disarranged as if fresh from a hard struggle. But his opponent was never to be seen, and the only conclusion the folk could come to, was that their evil-eyed neighbour had had a tussle with Satan himself.

from Shropshire Folk-Lore; A Sheaf of Gleanings, vol.1 edited by Charlotte Sophia Burne from the collections of Georgina F. Jackson 1883

“the Devil on the Stiperstones”

It’s said when mist hangs around the Devil’s Chair (a crag on the Stiperstones) Satan and a coven of witches are meeting and bad deeds are afoot.

Elsewhere on the website you can find an early years/Key Stage 1 page about this story (including information for parents and carers which has a more detailed version of the story and visitor information about the site) click https://mythstories.com/stories/the-devils-chair/.

“the Giantess with a golden torc buried on Llanymynech Hill”

‘The Giant’s Grave’ is the name given to a mound on the Shropshire side of Llanymynech Hill, where once was a cromlech, now destroyed. The story goes that a giant buried his wife there, with a golden circlet round her neck, and many a vain attempt has been made by covetous persons to find it, undeterred by the fate which tradition says overtook three brothers, who overturned the capstone of the cromlech, and were visited with sudden death immediately afterward.

from Shropshire Folk-Lore; A Sheaf of Gleanings, vol.1 edited by Charlotte Sophia Burne from the collections of Georgina F. Jackson 1883

“Ercol and Wrekon” a creation story of The Wrekin.

There’s no better place to go for more information about this story than https://mythstories.com/stories/ercol-and-wrekon/ where you’ll find Joseph’s short version of the tale using kamishibai slides and a longer video version filmed on Ercall Hill. Both were created as part of the Victorian Wellington project in 2014 when Joseph was a volunteer with the Away With Words Storytelling Club.

These 5 prints are now displayed as part of the Mount Pleasant Primary School ‘mini-museum’ in Shrewsbury.